American And Indian Constitutions: A Study In Contrast 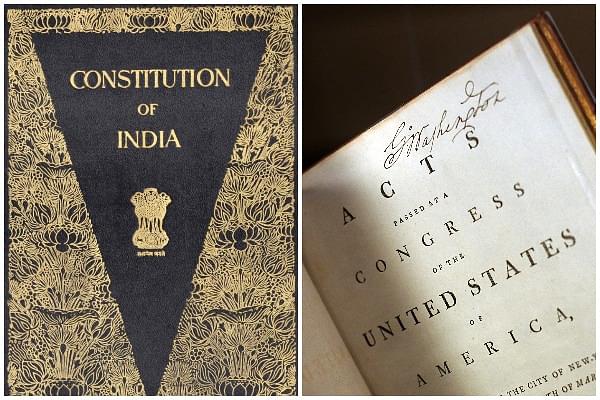 The Indian and US Constitutions

India and the United States (US) are the two largest democracies in the world. In addition to being democracies, the two nations are also constitutional republics, bound by a written constitution. However, the attitudes of the general public and the political establishment towards the constitutions are vastly different in the US and India. In America, it is the political right and the leaders of the Republican Party who often lace their rhetoric with references to “constitutionalism” and emphasise the need to have an “originalist” interpretation of the document. While in India, many sections of the political right are often sceptical of the constitution, believing that the document is insufficiently suited to Indian realities and Indian culture.

To account for the markedly different outlooks towards the constitutions, it is worthwhile to study and compare the two documents – which are vastly different from each other. When we get down to doing that, here are a couple of things that strike most of us:

Moreover, why does the American Constitution command such reverence in the US, particularly among conservatives, while in India, it is the conservatives who are often most critical of the document?

Scope of the two documents

The other major difference in the two Constitutions lies in the degree of “federalism” in the two countries, at least in a formal sense.

But one of the reasons the state Constitutions can be very long in the US is because they go beyond outlining the structure and powers of the government. As an example, Amendment 520 in the Alabama Constitution authorises one of the counties (Madison County) to provide for the excavation of human graves.

Paternalist Tendencies in the Indian Constitution

The Indian Constitution differs from the American document in one very important way. It contains within it sections of text that are mildly condescending towards both the citizenry and future lawmakers.

The section on "Fundamental Duties" was introduced in 1976 as a part of the forty-second amendment during the Emergency. Here are a couple of the duties mentioned as a sample:

- Article 51A, Point “f”: “To value and preserve the rich heritage of our composite culture”

- Article 51A, Point “h”: “To develop the scientific temper, humanism and the spirit of inquiry and reform”

While this may be well-intentioned advice, there is a tone of paternalist condescension in these prescribed “duties” that is striking. Also the verbiage of these “duties” is very vague and not precise. For instance, how does one define “scientific temper” or “humanism”? It is open-ended. The American document does not consider it necessary to tell its citizenry what sort of a life they should lead, and desists from virtue signalling.

Let’s consider the other section we mentioned – “The Directive Principles of State Policy”. This section comprises Articles 36 to 51 in the Indian Constitution.

What is this section about? The injunctions in these articles are not legally binding to enforce, but the section strikes us as a set of guidelines and “soft signals” communicated by the drafters of the Constitution to future lawmakers.

Here are a couple of directives:

- Article 38, Point 2: “The State shall, in particular, strive to minimise the inequalities in income, and endeavour to eliminate inequalities in status, facilities and opportunities, not only amongst individuals, but also amongst groups of people residing in different areas or engaged in different vocations” (introduced in 1978 as a part of Amendment 44).

- Article 43: “The State shall endeavour to promote cottage industries on an individual or cooperative basis in rural areas.”

While there may be merits to some of the directive principles, these are essentially attempts to impose the political view of the Drafting Committee and Constituent Assembly on future generations of lawmakers, rather than let the party system in any given era determine the political agenda.

The American Constitution, for the most part, limits itself to describing the structure of the federal government and makes no attempt to influence the political agenda in the distant future. It is left to the political parties and working politicians in posterity to figure that out.

Perhaps, the most important and fundamental of all the differences between the Indian and American Constitutions is the vastly different approaches taken to ratify the documents.

The American document was ratified through a relatively democratic process wherein each of the 13 states in the Union voted on it through their ratifying conventions. The Constitution came into force only after each state ratified it. Though the ratification was not through direct elections, the ratifying conventions were elected by a section of the citizens. In the state of New York, for instance, the ratification convention was elected by all free male citizens. The democratic process meant there was a natural pressure on the Constitutional convention to make the document brief, communicable and as minimalist as possible.

The Federalist Papers were a set of 85 essays published in the newspapers of New York to promote the ratification of the US Constitution and get the public at large on board. So, though the ratification was not through direct elections, a very genuine effort was made to educate the masses and get them on board.

The ratification of the Indian Constitution was radically different. There is no Indian equivalent of the Federalist Papers. To get the Indian Constitution into force, all that was required was the assent of the Constituent Assembly, which was partly comprised of indirectly elected representatives (elected by provincial assemblies), and partly comprised of nominated members (for the princely states). So, this was not a popularly elected body.

An even more important point to note is that the Constituent Assembly was deeply involved in the drafting the Constitution itself. It met over 11 sessions and 166 days between 1947 and 1950 to discuss the Constitution. In contrast, in the US, there was a very clear separation between the drafting of the Constitution (done by the Philadelphia convention - a central body with representation from each state), and the state-level ratification conventions, which voted on it later.

This separation meant that the ratifiers did not have their hands dirty in the document, with the exception of a a small minority of members who were a common presence in both conventions. They had no emotional stake in the Constitution draft and could vote on it independently. It was up to the drafters of the Constitution to convince them of this document. This is what necessitated the "Federalist Papers" - a remarkable exercise in marketing the newly proposed law of the land.

No such marketing was required in India, given that the ratifiers were the drafters too. This is a huge difference that accounts for the often cryptic, vague, and verbose nature of the Indian constitution, as opposed to the minimalist style of the US document. The Indian document represented the views of an indirectly elected/nominated elite. It did not necessarily reflect the pulse of the nation.

This need not lead us to judge the Indian Constitution unfavourably. The objective here is to merely underline that the philosophies underlying the two documents are very different. While the US Constitution was a democratic outcome, the Indian document was the conception of a few hundred very well-intentioned minds who did not have to put in the hard effort to market what they wrote.