As Icons Of Colonialism ‘Fall’ Across The Globe, India Must Also Reassess Its Cultural ‘Heroes’, Uncover Their Misdeeds, And Retell History 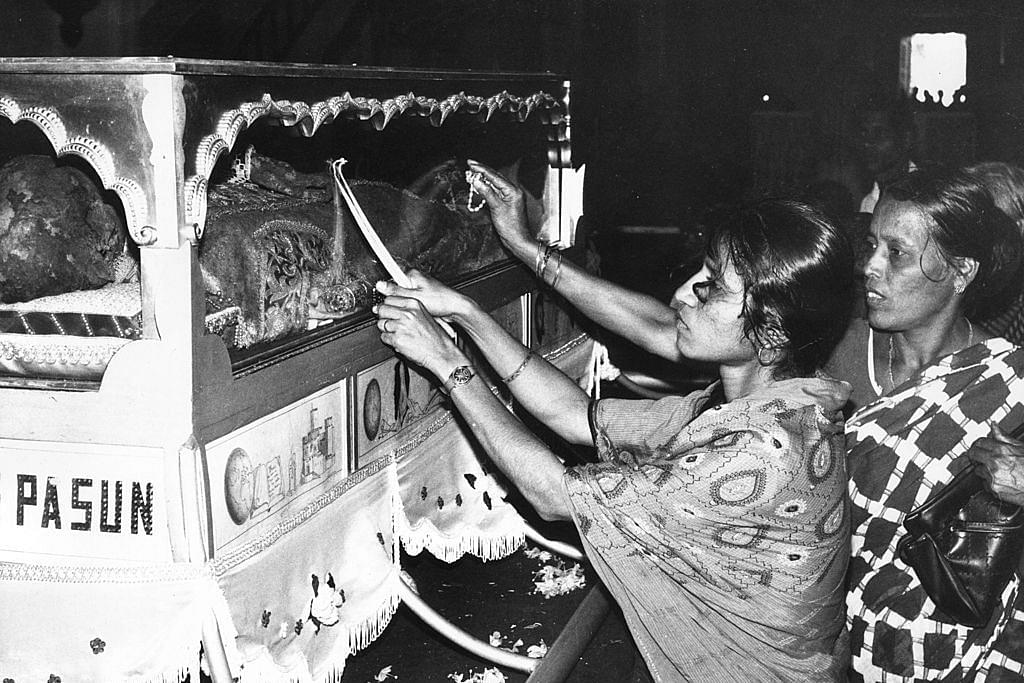 The first in a long line of pilgrims raising candles to the glass tomb cover of St Francis Xavier in the Basilica of Dom Jesus, Goa, India. (David Warren Dorset/Keystone Features/Getty Images)

The world is in a state of churn due to a global anti-racism movement sparked by the brutal death of an African American man, George Floyd, at the hands of a police officer in Minneapolis, USA.

The widespread protests have started a much overdue discussion not just about police brutality, but over historical crimes against humanity like colonisation, slavery, cultural genocide and persecution of native populations.

So many statues of past heroes are falling all over the world, including that of slave trader Edward Colston in Bristol, King Leopold II in Antwerp, Christopher Columbus in Boston and Junipero Serra in San Francisco in a spontaneous public movement.It is a sign that ordinary people everywhere are demanding a fresh look at their history.

A few days ago, protestors in the US toppled statues of Spanish missionary Junipero Serra at several places in California. Junipero Serra was a  Spanish evangelist from the 18th century. He established 21 Catholic missions in California. These missions  were an integral part of Serra’s mission to convert the indigenous population of California to Christianity.

These missions alienated thousands of Native Americans from their own culture and traditions and forced them into penury. Thousands perished due to disease as the Missions forced an alien way of life on them. The mission buildings and the huge estates they amassed were built using slave labour extracted from the Native American population.

In 2015, Vatican canonised Serra as a Roman Catholic saint. At the time, many groups of Native Americans had protested, expressing their distress at the Vatican’s decision to turn the perpetrator of a cultural genocide into a hero.

The Pechanga Band of Luiseño Indians had written an open letter to Pope Francis. The tribe’s letter accused Serra of wiping out the tribe’s population using repressive tactics. The letter said: “In just one generation, the total population of all Payómkawichum (Luiseño) villages suffered a greater than 90 per cent population loss through disease and abuse brought by Fr. Serra’s missionisation. Fr. Serra’s mission system killed between 9,000 and 13,500 of our ancestors.”

The Pechanga Band of Luiseño Indians had accused Serra of triggering a collapse of the tribe’s indigenous societal structure. They also accused him of ‘setting in motion, atrocities and hardships that our people endured for nearly two centuries’.

When the imposing statue of Junipero Serra was toppled from its pedestal at the Golden Gate park a few days ago, there were few tears shed for the Spanish Missionary. Many ‘Indian Liberal Intellectuals’ too had openly welcomed the toppling of statues of past colonisers.

However, these same people are curiously silent on India’s own Junipero Serra whose statues dominate many street squares in India and whose body lies in a Church in Goa venerated by millions. His name is Francis Xavier. It is time Indians took a hard new look at the activities of Francis Xavier and how it affected the native population of India.

Francis Xavier was a Jesuit missionary who was sent to Indian colonies of Portugal by King Joao III of Portugal on a mission to convert the people of Goa to Christianity. Francis Xavier landed in Goa, the centre of Portuguese activity in the East at the time, on 6 May 1542.Even before the arrival of Francis Xavier in Goa, two Portuguese Governors, Minguel Vaz and Diago Borba, had already started a Portuguese state-sponsored pogrom for proselytisation of the native Hindu and Muslim population of Goa and had carried out large-scale demolitions of  Hindu temples.

Francis Xavier worked hard at converting the native Hindus to Christianity. He harboured a deep distrust for Hindus and described them as ‘idolators’.His utter contempt for the local Hindus and his hatred for the Hindu faith is reflected in his own writings in several places.Some of his quotes regarding Hindus are as follows:

Whenever I hear of any act of idolatrous worship, I go to the place with a large band of these (converted) children. The children run at the idols, upset them, dash them down, break them to pieces, spit on them, trample on them, kick them about, and in short heap on them every possible outrage.

The letters and instructions of Francis Xavier, page 153.

(Indians) “being black themselves, consider their own colour the best, they believe that their gods are black….the great majority of their idols are as black as black can be…and seem to be as dirty as they are ugly and horrible to look at.”

The letters and instructions of Francis Xavier, page 160.

When all are baptized I order all the temples of their false gods to be destroyed and all the idols to be broken in pieces. I can give you no idea of the joy I feel in seeing this done, witnessing the destruction of the idols by the very people who but lately adored them.

The letters and instructions of Francis Xavier, Page 281.

It is clear from the above quotes that Francis Xavier was steadfast in his mission to evangelise.But not many people know that he was the first person to seek the brutal court of inquisition to be established in Goa.Not content with merely converting the native Hindus and Muslims, Francis Xavier asked for the court of inquisition in Goa.In a letter addressed to king Don Joao III on 16 May 1545, he wrote:

The Court of Inquisition, set up in 1560 in Goa, lasted for 252 years. It was described by Goan historian A. K Priolkar as the ‘terrible tribunal of torture.’

The cruelties which in the name of the religion of peace and love this tribunal practiced in Europe, were carried to even greater excesses in India, where the Inquisitors.. saw with pride the Archbishop as well as the viceroy submitted to their power. Every word of theirs was a sentence of death and at their slightest nod were removed to terror the vast populations spread over the Asiatic regions, whose lives fluctuated in their hands, and who, on the most frivolous pretext could be clapped for all time in the deepest dungeon or strangled or offered as food for the flames of the pyre.

While it is true that Francis Xavier was dead by the time the Court Of Inquisition was established in Goa, Portuguese historian and former head of the department of history, Universidade Lusofona de Humanidades e Tecnologias in Lisbon, Teotonio D’Souza, has opined that Xavier was fully aware of the what the Court of Inquisition could do.

In an interview published on 27 April 2010 in the Deccan Herald, Dr. D’Souza clearly states that, “Francis Xavier and Simão Rodrigues, two founder-members of the Society of Jesus, were together in Lisbon before Francis Xavier left for India. Both were asked to assist spiritually the prisoners of the Inquisition and were present at the very first auto-da-fé celebrated in Portugal in September 1540, at which 23 were absolved and two were condemned to be burnt, including a French cleric. Hence, Francis Xavier could not have been unaware of the brutality of the Inquisition.”

The Goan Inquisition resulted in a mass exodus of both the Hindus as well as the newly converted Christians out of Goa, as the terror of the Inquisition was such that even the Portuguese Viceroy of Goa couldn’t go against it. Christian activist from Mangalore, Robert Rosario, who had started a movement against the veneration of Francis Xavier, had said in an interview that, “Irony is that the very same person who brought in the horrific inquisition, Saint Francis Xavier, is venerated today! What hurts more is the fact that the very same people who are descendants of the sufferers of inquisition are made to venerate him in the churches built in his name.”

As the world gets ready to take a hard look at its colonial history and re-evaluates past heroes, it is time India and Indians reassessed the cultural genocide, systematic oppression and torture of the local indigenous population of Goa that was carried out by the Jesuit missionaries.

It is a travesty that Francis Xavier’s name adorns so many educational institutions in India.If Princeton University can vote to remove the name of President Woodrow Wilson from its school of public policy, why can’t Indians demand the same thing?

As former heroes of colonialism tumble down from their high pedestals, it is high time India too ensures that its history is scrutinised and controversial historical figures reassessed.

One hopes that this intellectual churning will educate people on the real history of India.It is high time we acknowledged the injustice and collective pain imposed upon native populations by a brutal, relentless, ruthless colonising power.

George Floyd’s death has started a global movement that will, hopefully, record the struggle of every culture dominated, destroyed and dehumanised by oppressive colonisers. While it may not be possible to provide justice to the past victims of colonisation, the least we can do is to stop making heroes of those who perpetrated such colossal historical injustices.

Historical atrocities committed by colonisers in the name of religion cannot be whitewashed and sanitised any longer.They must enter wider public consciousness. It is not the Catholic Church, but the relentless force of historical truth that must determine whether a person is a saint or a sinner based on his actions.