Before Reza Aslan, There Was This 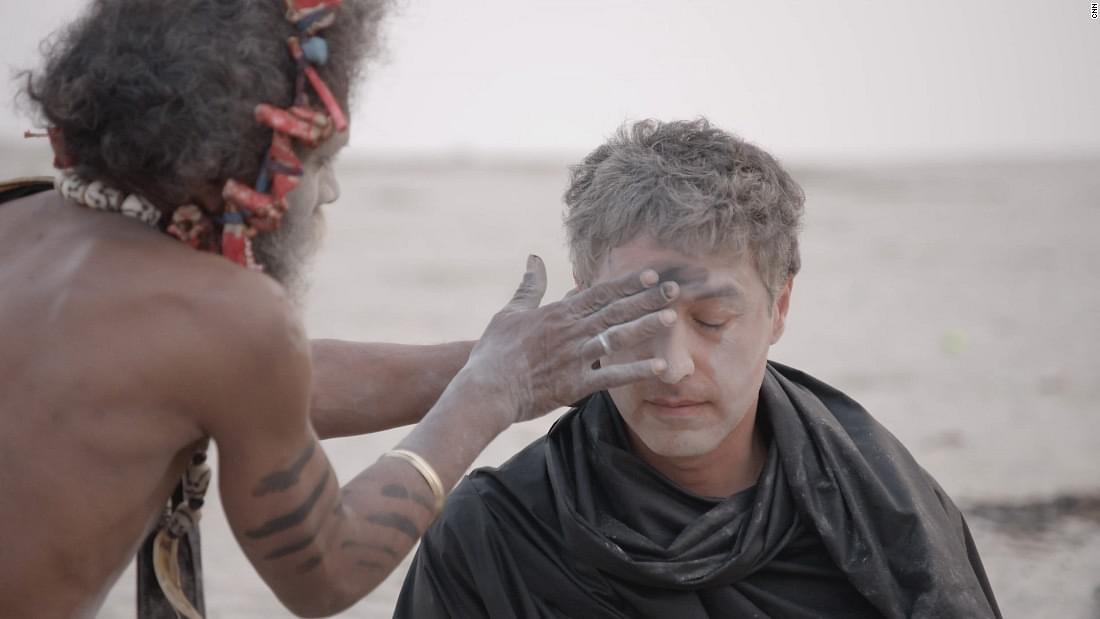 Along with the murderous attacks on NRIs (Hindus and Sikhs) in the United States, came the CNN documentary that has created a lot of heartburn for the Hindus.

Interestingly, the documentary in question features Reza Aslan. Aslan loves to flaunt himself as ‘a scholar of religions with four degrees, including one in the New Testament, and a fluency in biblical Greek who has been studying the origins of Christianity for two decades, who also just happens to be a Muslim’. Yet, he comes across as more a crypto-fundamentalist Muslim; more sophisticated than Zakir Naik of course, but nevertheless in the same spectrum. Aslan finds philosopher Daniel Dennett — leave alone Richard Dawkins — an ‘atheist-fundamentalist’. His sympathy for creationism comes out when he finds fault with Dawkins for comparing creationists with Holocaust deniers.

And what should be interesting for the Hindus is why this man, who has no scholarship of Hinduism, has been allowed to distort Hindu culture, similar to the way the colonialists distorted Hinduism and Hindu culture in a supposedly secular medium in the West.

The reason can be discovered in a small article published in the December 2016 issue of History Today. Titled bluntly as ‘A Hatred for Hindus’, it was written by Mihir Bose, an NRI journalist who has been the first sports editor of BBC. The article makes one cringe. He says it straight:

“Long before the recent rise in Islamophobia, distrust of Hinduism was rife among Britain’s ruling class.” Winston Churchill’s secretary John Colville records in his diary a conversation the PM had with Air Chief Marshal Sir Arthus Harris: “The PM said that the Hindus were a foul race ... and he wished Bert Harris could send some of his surplus bombers to destroy them.”

Mihir Bose gives facts after facts, some disbelievingly derisive of Hindus, some chilling, but all disgustingly filled to the brim with hatred towards Hindus. Bose says Churchill was influenced in his views by Beverley Nichols, a pro-Nazi journalist of 1930s, who was also virulently anti-Hindu. He would later don the anti-Hitler stand being a patriotic Englishman. In 1944, when he wrote the book Verdict on India, the unwritten rule was that the villains should be painted as Nazis and Fascists. So he titled his chapter on Gandhi as ‘Heil Hindu’. Interestingly, the passage from the book that Bose reproduced would seem familiar to any modern student of Indian politics:

Congress is the only 100 per cent, full blooded, uncompromising example of undiluted Fascism in the modern world … just as every Nazi is a superman, so is every Brahmin a ‘Bhudeva’, which means ‘God on earth’. And Congress is, of course, a predominantly Brahmin organisation ... The German ‘Heil Hitler’ has a striking resemblance in Indian Gandhiji. … The resemblances between Gandhi and Hitler are, of course, legion. …

If one replaces the word Congress with either BJP or RSS and the name Gandhi with (Narendra) Modi, then what you have may well be a paragraph from a third rate Marxist pamphlet or a paragraph from the column of some ‘scholars’ or from an editorial of eminent dailies.

Churchill derived his views on India from this book. Recommending this book to his wife, Churchill wrote that the book ‘shows the Hindu in his true colours’. He preferred the Muslims over the Hindus. He lied to Franklin Roosevelt that the majority of the Allied army’s Indian soldiers were Muslims while they were actually Hindus. His views were not just abstract hatred for an exotic people. It had terrifying real term effects as we know from the history of the Bengal Famine as documented by Madhushree Mukherjee in Churchill’s Secret War. What is interesting is that Mihir Bose rightly points out that the ‘Hindu phobia’ of Churchill had deeper roots.

So, I ordered his book From Midnight to Glorious Morning? from Amazon. It is a collection of articles arranged in such a way as to form an interesting narrative.

Soon after the Jallianwala Bagh massacre, General Dyer was forced to leave the army by Edwin Montagu, Secretary of State for India. Even this minor punishment triggered a ‘get Montagu’ witch-hunt. Bose observes that there were ‘ugly overtones of anti-Indian sentiments fused with anti-Semitic ones’. Austen Chamberlain wrote that the feeling of Montagu-Dyer event was of ‘a Jew rounding on an English man and throwing him to the wolves’.

Mihir Bose goes through the historical narratives of the colonial period meticulously and finds unifying strands that run across decades if not centuries.

“Eventually, the Moslems will become master, because they are warriors, while the Hindus are windbags.” That was Churchill to Soviet Ambassador Ivan Maisky. “In truth the Hindu like eunuch excels in the qualities of a slave. …But if less soft, the Mahomedan is more manly, more vigorous. He more nearly resembles our own half-civilized ancestors... more susceptible of increased civilization than a people in the state of the Hindus.”

That was the famous Vincent Smith in his Oxford History of India.

Mihir Bose goes on to provide points after points of data of how deep rooted the hatred towards Hindus was in the colonial mind.

Again this hatred and prejudice had historical consequences for India. In British India, for a considerable number of decades, a Muslim law officer delivered a fatwa and the English man sitting next to him would then pass the sentence. Bose gives us quite a shock when he quotes Charles Dickens who wrote that he wished to the Commander in Chief in India that he would ‘exterminate the Race (Indians) … proceeding with all convenient dispatch and merciful swiftness of execution , to blot it out of mankind and raze it off the face of the earth’.

Hitler could well have borrowed words from Dickens.

The inherent anti-Hindu pro-Islamist nature of Western media was evident even then. Agha Khan led eminent Indian Muslims and petitioned the British not only against democracy in India but also demanding more jobs for Muslims ‘commensurate not merely with their numerical strength’ but also due to the ‘value of contribution they make to the defence of the Empire’. Mihir Bose says ‘The Times’ then praised the demand as ‘the only piece of original thought which has emanated from modern times.’.

The West constantly produced anti-Hindu literature in the decades to come. Combined with vast missionary literature that showed Hinduism and India in a bad light, academic attacks also continued. William Archer, a British art critic, wrote in detail how Hindus could not call themselves cultured. Not only did Bernard Shaw republish his essays, he also agreed with him. It was then that the American writer Katherine Mayo came with her ‘Mother India’. Mihir Bose places these attacks on India in the context of ‘British fighting to preserve the Empire’ who felt ‘the need to open a new front against Hinduism’.

It was then that Nichols came with his Verdict on India. He too considered Muslims superior to Hindus. Comparing Jinnah to the ‘typical Hindu politician’ (Gandhi), he declared the difference to be of that a ‘surgeon and a witch doctor’.

Even after independence, hatred against Hindus and Hinduism has been steadily cultivated in Western media. Two years after 1947, Walter Lippmann, one of the most famous journalists of the US, came to India and felt ‘the Hindu world more alien’. Studying Indian art he emerged ‘with increasing loathing and terror, positive terror that such trains of thought and such feelings should exist’. But in comparison, he felt Islam to be ‘familiar and intelligible’.

Hindu hatred in the United States has a long history though. Swami Vivekananda in an insightful observation pointed out how missionary literature included false stories of Hindu mothers throwing their children to crocodiles, with the child was shown as white and mother as black to invoke maximum contempt for Hindus.

Bose points out that Mill almost celebrates the demolition of Somnath by Mahmud of Ghazni. He produces the passages from the book which could well be mistaken for the flattery of the courtiers of Mahmud of Ghazni. Looking at the references one finds that the edition Bose uses, is the fourth edition edited by Percival Spear. Percival Spear, was the co-author with Romila Thapar of the prestigious A History of India and he defended Aurangazeb's iconoclasm saying that he was 'maligned by Hindu fundamentalists'.

Going through the academic and media representation of Hinduism in the United States, from Steven Spielberg’s Temple of Doom to the recent CNN documentary, animosity against Hinduism is very much there.

Sometimes American Hindus think that the left liberal establishment in the West may understand them better. However, the left liberal establishment in the United States sees Hindus through the colonial eyes and stereotype them. So some Hindus in pure desperation turn to the Right which they consider as pro-Hindu because of the Islamophobic noises and gestures. They cannot be more wrong.

The right wing in the United States also has at its core a more pro-Islamist dispensation and would find Hindus culturally, religiously and racially inferior. David Duke for example considers Hindus as degraded because of mixing of Aryan and aboriginals. At the same time he also shares podium with Islamist leaders who gathered in 2006 for ‘scientific denial of Holocaust’. So, for many of the rightwing in the United States, Hindus, if not already, would soon become objects of hatred more than the Muslims. After all, with Islam, their fundamentalism shares a worldview.

Now consider this: The left dominates the media. It has inherited from the colonial legacy the hatred for Hinduism, which it continuously portrays as an amalgamation of an oppressive caste system, evil priest-craft and barbaric savagery. Meanwhile, the Christian right has Islamophobia but only as an equal competitor. There can even be handshakes, as it happens, between honourable enemies. The dirty job of eliminating Hindu interests from the discourse can be handled by rightwing zealots of the West; like they did away with the Indian descendants of Roma who too perished in the gas ovens under the Iron Cross of Nazis. Unsung, and to this day never a dominant part of Holocaust memories.

The CNN documentary distorting Hinduism and the sporadic killings are independent, yet connected events. They may be pointing to the shape of worse things to come in the future. So Hindus have to transcend the binary of the left wing and right wing. They have to network with the indigenous cultures and spiritual traditions world over and learn from the Jews how to keep their memories intact, and in a sustained way, study all forms of hatred against them. Ultimately they need to fight centuries of the narrative of hatred with the light of knowledge.