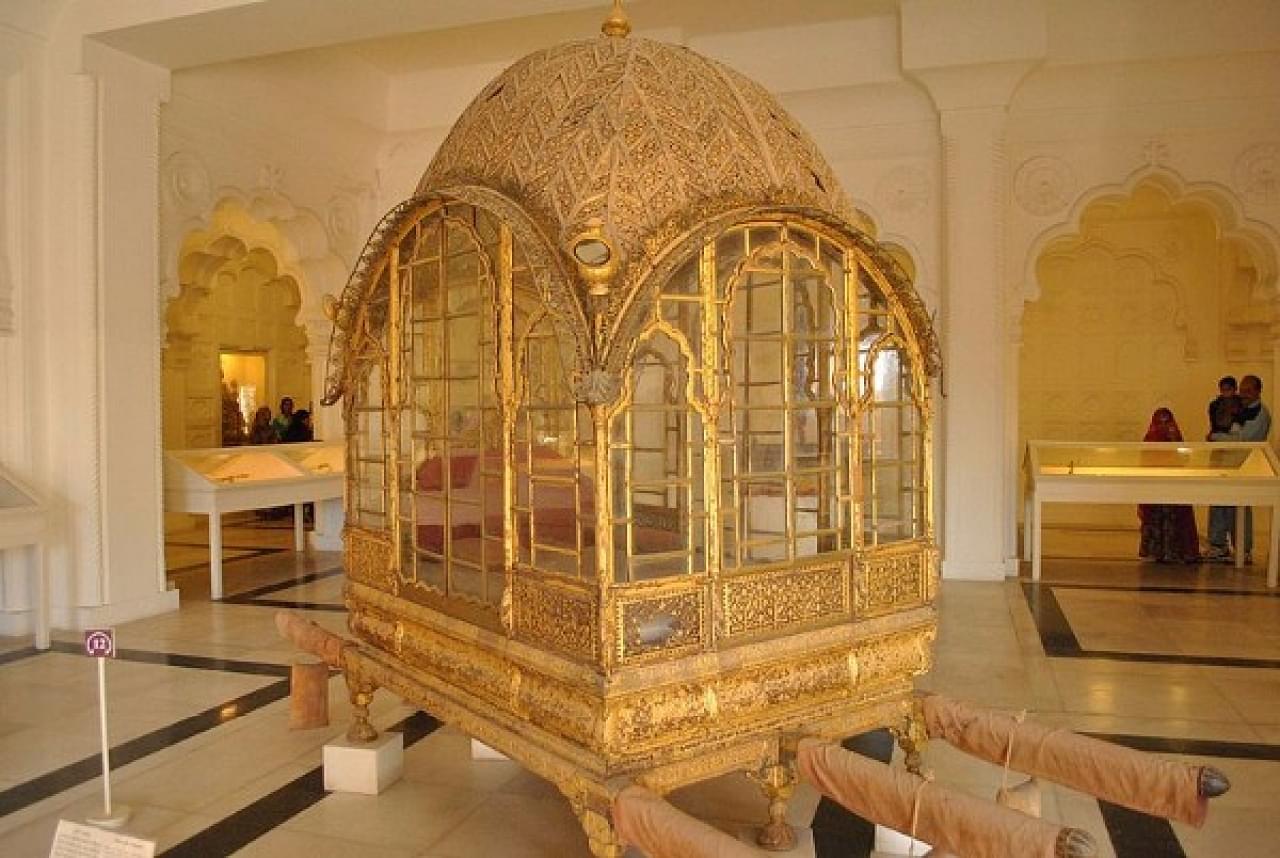 A royal palanquin on display at the Mehrangarh Museum in Jodhpur, Rajasthan. (Wikimedia Commons)

Only a handful of countries in the world can claim to be the cradles of civilisation. These countries painfully nurtured civilisation, over several millennia and pioneered the civilised way of life. They enriched us with ancient wisdom and gave us the tools to forge our future. The artefacts these civilisations left behind are stored in modern museums. But, surprisingly, many artefacts have now ended up in the museums of countries that have nothing to do with the civilisations that created them. The Metropolitan Museum of Art (The Met) in New York and the British Museum, for example, have thousands of works of art from North Africa, the Indian Subcontinent, China and the Far East. These artefacts were either appropriated, stolen or purchased. With a relatively recent history of their own, these countries have amassed a large number of excavated material and works of art to fill their own artificial art warehouses.

The Met in New York, for example, has over 7,000 works from the ancient Near East, 11,000 works from Africa, Oceania and Americas, 35,000 pieces of art from Asia, 26,000 pieces from ancient Egypt, 50,000 sculptures from Europe and 12,000 works of Islamic art. None of these objects belong to the United States. Similarly, the British museums are full of appropriated pieces of art from its colonies. These appropriated displays attract millions of visitors every year and earn these museums millions in visitor fee and merchandising.

The Met saw an annual footfall of around 7 million visitors in the year ending July 2017. The admission fee stood at $42.7 million, an additional revenue of $87.4 million was earned through retail sales, restaurants and parking, taking the total revenue from visitors to $130.1 million. The British Museum on the other hand had 6.2 million visitors in the financial year 2016-17. The admission fee was £ 3 million and another GBP 14.8 million from retail and other commercial activities. This is the story of just two of the hundreds of museums these two countries have. The National Museum in Delhi on the other hand has a paltry 400,000 visitors a year. The state of disinterest by the state and union governments can be measured by the fact that there is no comprehensive annual report from these museums that tell us how they perform on parameters like footfalls, investments and revenue generation.

Who is to blame for the sorry state of Indian museums? The blame squarely lies with the government. Despite the initiatives like “Adopt a Heritage”, the general state of these museums is derelict at best. The reason people visit museums is primarily to get acquainted with history, art, languages and culture. In India, the alienation of people from history starts at an early age. The history textbooks are so transactional in nature that a child never gets the chance to appreciate it. History has become the subject, where one simply memorises the dates, the chronology and the genealogy of kings. The students are expected to write long essays on the administrative triumphs of empires or their exploits in wars. By the time the students reach the age where they can understand and start appreciating history, they are already bored. When these children grow up, they not only avoid reading or discussing history, they become indifferent to it. The very thought of a museum probably brings back the unpleasant memories of their childhood, memorising dates and chronologies.

As if the boring history textbooks were not enough, the government has made the museums look a shade darker. Disinterested staff at the ticket counter, the amateurish lighting in the galleries and the poor circulation plans, welcomes the visitors, who are brave enough to take the challenge. The overall feel at the museum is one of insufficient information and callous display. The galleries are curated according to the taste of academicians and archaeologists and not for ordinary citizens. No wonder people find the museums in India a boring affair.

The sheer lack of foresight and antiquated curation concepts turn a visit to Indian museums into laments on government apathy. Since Independence, the government has never tried to convert our museums into attractions. The Western countries have created daily activities around the museum themes, which attract families. The Victoria Albert Museum in London organises daily family activities and special events during summer breaks. Activities like museum trails, exploration games and family workshops are free and engage the kids in fun activities. Similar activities are organised by the British Museum, including Late Night Fridays, where special dance and music performances are organised. The Met organises daily activities, which include multi-lingual guided tours and toddler storytime designed especially for young children. The information is kept up to date and interested participants can simply look them up on the museum website.

The museums in India on the other hand have outdated information on their websites and the best activity they arrange are lectures on academic topics. While these lectures are extremely interesting for historians and archaeologists, they are of little interest to young adults and families. The Chhatrapati Shivaji Maharaj Vastu Sanghralay, Mumbai, conducts workshops and music events, but they are so few and far in between that it fails to create a momentum. The Western museums on the other hand keep the momentum going with their daily activities.

In any museum the souvenir shop presents us the opportunity to take a bit of our heritage with us. From wax seals in the Victoria Albert Museum to the reproduction of Van Gogh’s paintings in The Met, we get a chance to take home what is close to our heart. In India on the other hand we have some of the worst attempts at organising a gift shop at the museum. The National Museum in Delhi has two gift shops, one worse than the other. The one on the ground floor, within the ticket counter premise has a few unpleasant copies of the Harappan seals and bad imitation of miniature paintings from Rajasthan. The one on the first floor, probably managed by a private vendor, is full of things that one can buy at a random shop on Janpath.

The consistent efforts at marketing their museums in the Western countries have helped raise their profile in public life. The commercially run restaurants in places like The Met are some of the finest places to take one’s clients and visitors to. The restaurants or cafes in Indian museums can’t even be compared to a food court in a tier III city. An attempt was made by the Crafts Museum, Delhi to attract a private restaurant operator. It so happened that the restaurant did such a fantastic job at promoting itself, that it outshined the museum itself.

The state of affairs in our museums is such that any Indian visiting them would go back with a very low opinion of our own heritage. A revamp of our museums is long overdue. The government has to take steps to not simply showcase our heritage, but do it with some dignity. In a rare attempt of showcasing our history, the National Museum has organised a three-month long exhibition titled, “India &The World: A History in Nine Stories”. The exhibition is a collaboration of the National Museum, The Chhatrapati Shivaji Maharaj Vastu Sanghralay, Mumbai and the British Museum, London. For once it is heartening to see elegant displays with aesthetically designed lights. A series of lectures by Indian and international historians and conservationists have been planned throughout the exhibition period. For people who are interested in Indian and world history, this is a must visit.