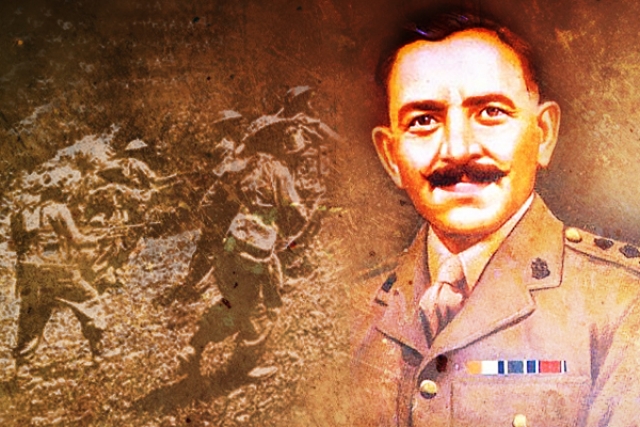 The Government of India should designate 26 October as Martyrs’ Day in memory of the unsung war hero tribute Brigadier Rajinder Singh.

The date, 26 October, does not stir anything significant in the minds and hearts of the majority of this country. It is not a special birthday or a religious holiday that is etched in the conscience of India. One has to do a Google search to realise that 70 years ago, Maharaja Hari Singh of Jammu and Kashmir signed the Instrument of Accession to India as the region was under siege from Pakistani forces. The accord mobilised the Indian Army to repel the invaders weeks after the nation gained Independence.

The story that many won’t find through a Google search, however, is that of Brigadier Rajinder Singh and his band of warriors who died defending the Kashmir valley. He was martyred the same day Maharaja Hari Singh signed that historic document uniting Jammu and Kashmir with India, a sacrifice that honoured the simple words of that contract. Brigadier Singh was the first recipient of the Mahavir Chakra in Independent India, yet this warrior is barely known to the nation he served, let alone outside the Jammu region. On the seventieth anniversary of his martyrdom, the nation must recognise the service of this brave soldier who defended not just the Kashmir valley in India’s first war with Pakistan but the entire nation – 26 October should be declared as Martyrs’ Day.

On 21 October 1947, Pakistani forces besieged Jammu and Kashmir after Maharaja Hari Singh declared independence. They tried to take control of the region by force, hoping that the dominant Muslim community would support them. They entered Kashmir via Baramulla and targeted the Sikh and Kashmiri pandits, committing rape, murder and arson in a bid to ‘purge’ the land.

Under siege, on 22 October 1947, Maharaja Hari Singh ordered Brigadier Singh, who served as the chief of army staff of Jammu and Kashmir, to defend the state “till the last man and the last bullet”. Maharaja Hari Singh’s son, Dr Karan Singh, in an interview remembers the day the order was given. In fact, he was present in the room when Maharaja Hari Singh gave that historic command. “It was a worrying situation,” he says. “Brig Rajinder Singh was given an order by my father and he just saluted and walked away.”

Brigadier Singh gathered 110 soldiers and moved to Muzaffarabad to counter the invading force of over 6,000 militiamen. He used guerrilla tactics to delay their advance, blowing up the Uri bridge and stalling them in Mahura and Rampur, inflicting heavy casualties. For four days, Brigadier Singh and his brave jawans hindered the progress of the Pakistani invaders. This may have been the first time in contemporary military history where an army chief personally led soldiers in combat.

As Brigadier Singh and his men fought, on 26 October, Maharaja Hari Singh signed the Instrument of Accession joining the Union of India. The Indian military rushed in to back Brigadier Singh; however, just hours away from his position, he was ambushed at Buniyar and fatally wounded. He had held fort and repelled the invaders long enough for the Indian Army to push them back, saving thousands from a brutal onslaught. He carried out his orders to the letter, setting an unparalleled example of courage and patriotism. “If Brig Rajinder Singh had not stopped the Pakistani invaders, if he didn’t sacrifice his life, Kashmir may not have been a part of India,” says Dr Karan Singh.

For the people of Jammu, Brigadier Singh is known as the ‘Immortal Dogra’ and the ‘Saviour of Kashmir’. He hailed from the Duggar or the Dogra people of Jammu, a community deeply entrenched in the armed forces of India for several generations. He continues to be an inspiration for people across Jammu, and almost every household has one or two members serving in the armed forces, many defending the border and the Kashmir valley.

The day 26 October is commemorated as a ‘Black Day’ by separatists in the Kashmir valley, as they rage against the armed forces and the Indian Union. Not only Jammu, Ladakh and Kashmir, but the entire nation should honour the sacrifice of India’s first war hero as a strong counter to the separatist narrative. A celebration of his life and service will send a strong message to our brave serving jawans who battle terrorists and stone-pelters to defend the country. Brigadier Singh’s sacrifice is the reason why Indians claim Kashmir to be an integral part of the country. He is a symbol of India’s commitment to fight and die for Kashmir. His memory makes the separatist call meaningless – a fool’s dream that history has denied and the future will never allow.

The Government of India should designate 26 October as Martyrs’ Day. We must remember the will and the sacrifice that has kept the Union of India together. Our history is a testimony to how our country is a more enduring force than the blind fury of the misguided and the resolve of the cowards. Even as tensions abound in the Kashmir valley, the soil is laden with the blood and spirit of heroes like Brigadier Singh and will never accede to those who would see its beauty burn just to rule over ashes.