Building Toilets Is Job Half-Done, Ending Open Defecation Is As Much About Fighting Mindsets 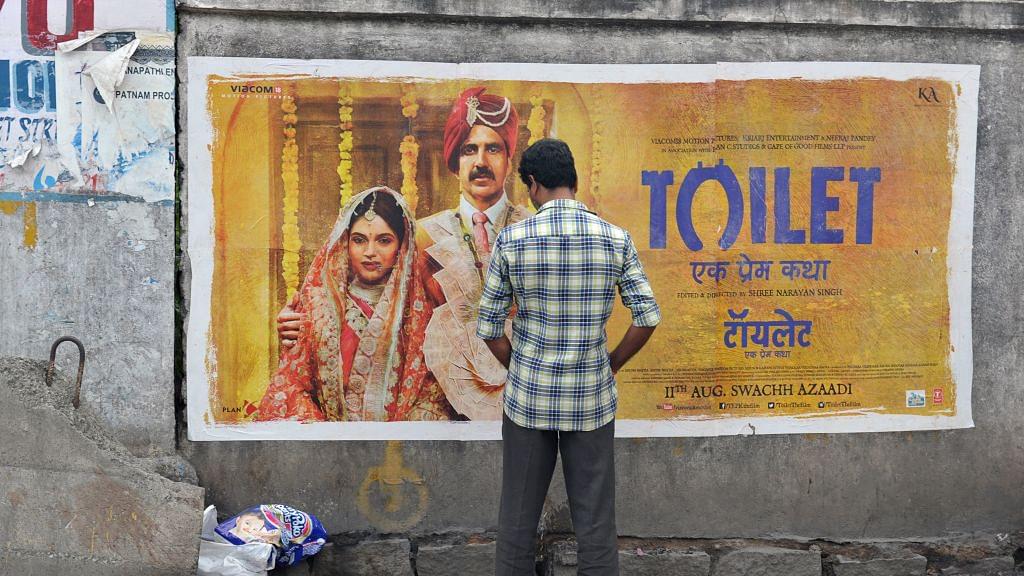 An Indian man urinates on a wall on the roadside in front of a poster for the Hindi film ‘Toilet’ in Hyderabad on August 12, 2017. The Bollywood film ‘Toilet: Ek Prem Katha’ (‘Toilet: A love story’), which was released on August 11, is inspired by the true-life tale of one man’s battle to build toilets in his village in rural India. / AFP PHOTO / NOAH SEELAM (Photo credit should read NOAH SEELAM/AFP/Getty Images)

Latrines and defecation aren’t usually the topics of discussion anywhere, but it is an issue that India needs to come to terms with more urgently. Outdoor urination and defecation is a practice which is rife across India. It continues to be an alarming problem in a country that is focusing on urbanisation, modernisation and economic development.

Open defecation is a daily ritual for many even in places where public facilities are accessible.

In 2016, The United Nations Children's Fund estimated that half of the population in India does not use a latrine. Instead, they relieve themselves outdoors. The situation is more severe in rural India where approximately two-thirds of the households do not have a toilet.

States such as Uttar Pradesh have one of the highest rates of open urination and defecation. Even officials have admitted that they have not made substantial efforts to combat the problem. “We are not facing any problem in the case of construction, but the major issue of toilet usage is our challenge, and regarding this we are helpless,” Santosh Kumar Singh, who supervises the state’s sanitation drive, was quoted as saying in the Independent.

Despite having a household toilet, people continue to relieve themselves outdoors believing that open defecation is part of their lifestyle.

The preference for open defecation has an adverse effect on public health. Faecal bacteria are circulated in the environment when flies feed on human waste and then pass on the matter when they come in contact with food. Human waste also penetrates into wells, rivers and other water bodies, polluting water that is used for drinking or bathing.

Open defecation has also led to the death of hundreds of thousands of children, and stunted growth. A report titled ‘Caught Short’, commissioned by the international development charity WaterAid, revealed that approximately 48 million children under the age of five in India suffer from stunted growth – a type of development failure that happens in the first two years of a child’s life that is usually irreversible. The problem is linked to a lack of access to toilets. Open defecation also affects a child’s physical and mental growth. There is additionally a high level of maternal and newborn mortality due to the spread of infectious diseases.

Open defecation also reveals gender divides and perpetuates social oppression where women have to wait till dark to relieve. This makes them susceptible to sexual assault and attacks by wild animals. There have been many instances of girls and women being savagely raped and murdered when they set out on to an open field. Moreover, girls' education is interrupted when schools do not have a toilet facility for them to use.

The issue of open defecation and safety for women and girls was the theme of the 2014 World Toilet Day. The initiative was spearheaded by Singapore's Ambassador Karen Tan, who believes forcing women to defecate outdoors due to a lack of toilets adversely impacts gender equality.

“I am very supportive and very glad he has taken this on board," she was quoted in IANS pertaining to Prime Minister Narendra Modi’s sanitation drive.

In another report compiled by WaterAid named ‘It’s No Joke: The State of the World’s Toilets 2015’, it was disclosed that India has both the highest number of people without latrines in their houses and highest number of people relieving outdoors. Neighbouring countries such as Bangladesh have made greater strides in decreasing open defecation without as much subsidy provided by the government.

Multiple attempts have been undertaken by state and central governments to tackle the issue. The capital Delhi provided subsidies for latrines for those from a poor household. The assumption made by the state government was that poverty (not mindset) is the primary reason that deters people from building a latrine in their houses.

The most prominent campaign in this regard is the Swachh Bharat Abhiyan or Clean India Mission, led by Prime Minister Modi. The mission, launched in October 2014, is the government’s top priority as it aims to provide every household with a latrine by 2019. The campaign has been lauded both nationally and internationally. "Modi is really aiming to give a high priority to that issue", said United Nations deputy secretary-general Jan Eliasson, referring to the sanitation issue. The initiative is also in line with the sixth goal of the United Nation’s sustainable development goals, which aims to wholly end open defecation by 2030.

However, simply building latrines will not miraculously eradicate the problem.

“What will be absolutely crucial is getting local, state and national government to make this a priority, and creating the cultural shift that will ensure that once the toilets are built they are used – by everyone,” WaterAid’s report states.

The cultural stubbornness that relieving in the open is more virtuous and wholesome will continue to hinder government sanitation drives on getting millions of citizens off the practice.

On a positive note, there have been some success stories in Haryana, Himachal Pradesh and Gujarat. The Modi government should analyse these case studies where the states have tackled the problem by building latrines, educating the locals (changing mindsets) and adopting proper waste management. According to government surveys, all houses in Himachal Pradesh have a latrine now. Haryana provided concessions to poor households to construct toilets, empowered women to hire volunteers to visit homes and urged people to build toilets. In 2015, the state council in the city of Ahmedabad, Gujarat, launched a new campaign where it paid children to use public toilets.

The government needs to question the assumptions behind its Clean India Mission. Ending open defecation should not simply imply building new toilets and distributing manuals on how to use them. More needs to be done to change societal perceptions and attitudes. This includes increasing public awareness, community engagement and ensuring that toilets are utilised.

The enduring shame of open defecation is deeply entrenched in India’s cultural attitudes. Building a toilet is about dignity for everyone. It ensures safety for children, women and the elderly. The strong community resistance to hygiene and sanitation will continue to hinder the government’s sanitation drive if the government does not restrategise its campaign.

Roshni Kapur is a graduate student at the University of Sydney, majoring in Peace and Conflict Studies.