China Vs The Church: First Round Goes To Xi As He Embarks On A Mission To Sinicise Christianity 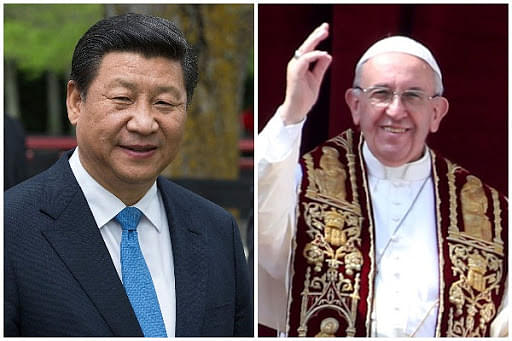 The Communist Party of China (CCP) has been on a mission for decades to usher in a unique form of socialism, one with the Chinese characteristics. But the last three decades of economic development and policy trajectory taken by Chinese leaders speak otherwise. Many thinkers argue that it was capitalism with Chinese characteristics and not socialism that heralded the communist country’s growth miracle that leapfrogged it into club of economic powerhouses - a feat which is aiding it transmogrify into a military superpower as well.

But socialism or capitalism, it hardly matters as long as it is clothed in Chinese characteristics. And that’s how every foreign idea or ideology must operate in China.

China’s obsession with sinicising alien thoughts has permeated into religious landscape as well. CCP believes that is has succeeded in sinicising a political ideology - socialism, and sinicising a religion - Buddhism. Now, it has set its eyes on its next project - to sinicise China’s fastest growing religion, Christianity.

President XI Jinping is a hardcore atheist and unapologetic Chinese nationalist. He has outlined his vision to sinicise all faiths many times since he took office in 2013. Though, CCP has been moving in that direction for decades, it had put the pedal on accelerator since Xi’s ascension. Despite severe backlash, especially regarding CCP’s relentless crackdown on Christianity, the communist party hasn’t deterred in its conviction of painting all faiths with Chinese colours. Xi couldn’t care less about world opinion.

Last year, Xi said that religious groups must adhere to the leadership of the CCP, and support the socialist system with Chinese characteristics. He exhorted all faiths to merge religious doctrines with Chinese culture, abide by Chinese laws and regulations, and devote themselves to China's reform and opening up drive and socialist modernisation. "We should guide and educate the religious circle and their followers with the socialist core values, and guide the religious people with ideas of unity, progress, peace and tolerance," he added.

On 1 February, new regulations on religion came into force in China. On the same day, China made Pope Francis agree to its terms on appointments of bishops to the church in China. The pope will now not be the final authority on deciding his own bishops in the communist country. He, instead, decided to accept the legitimacy of seven Catholic bishops appointed by the Chinese government and in addition to this genuflection also announced to sidelines two of his own loyal appointees who had no love lost with the CCP.

Many staunch Catholics have severely criticised the pope for bending over backwards to an authoritarian regime like that of China in hope that more concessions will bring rapprochement. Critics opine that the pope, whose moral authority has been wrecked by sex scandals that have engulfed clergy across the world, is hellbent on virtue signalling and is conceding and cravenly surrendering to the CCP by accepting appointments of bishops loyal to CCP rather than Rome to rule a Chinese diocese.

There are estimated to be anywhere between six and 10 crore Christians in China, with one-sixth of them Catholics. However, many churches operate below the radar and thus official numbers remain low as millions of Christians aren’t officially associated with the government-regulated Patriotic Church, i.e. Chinese Patriotic Catholic Association.

The crackdown on the church is not entirely irrational in China’s view given that it played a key role in bringing down Communism in the previous century. The CCP is obviously wary of it. Christianity continues to remain one of the greatest challenges to China’s nationalist project. It cannot possibly allow five per cent of its Christian population (and growing) owing allegiance to Vatican, which is one of the few countries that continues to maintain diplomatic relations with Taiwan - a thorn in China’s side. Hence the Chinese obsession with controlling appointments of bishops who are loyal to it. It wants to infuse the characteristics of socialism and patriotism laced with communist party’s propaganda through these bishops into churches of the country.

But why would Pope Francis agree to China’s terms? Maybe because, unlike other nations where Christianity can play the waiting game, localise tactically and then globalise by ensuring complete alignment to Vatican by digesting native practices, China may be a different beast. Hence, the pope is treading more carefully and avoiding confrontation that may lead to more crackdown on millions of Christians. Christianity with Chinese characteristics is better than Christianity under seige.