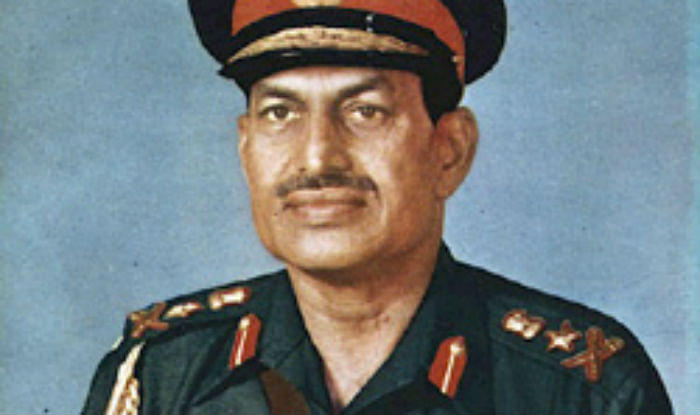 General K.V. Krishna Rao, who was Chief of the Army Staff from 1 June, 1981 to 31 July, 1983, was one of India’s most charismatic soldiers. His enduring legacy as a general is getting the defence establishment and the political leadership on the same page on the Pakistan question.

In an interview to Rediff in 2001, General Krishna Rao unequivocally spelled out how to deal with Pakistan. He stated –

It is in our national interest to demolish the logic of the two-nation theory. We accepted it at the time of Partition, but we no longer believe in it. Our enemy — the people who hurt us — is Pakistan. Pakistan says Kashmir is the core issue. They have instigated some frustrated people to indulge in militancy. They claim Kashmir on the basis of the two-nation theory. This theory was demolished in 1971 when half of Pakistan seceded from Pakistan.

General Krishna Rao was the first commander to formulate the military doctrine – later known as Cold Start – of multiple, shallow strikes at blistering speeds, aimed at capturing chunks of Pakistani territory. In three wars with Pakistan, India’s defence forces experienced the frustration of seeing the political leadership surrender on the negotiating table what the soldiers had won on the battlefield.

The military brass realised that New Delhi would continue to fold under western pressure the moment India’s armoured columns entered Pakistan. Speed was, therefore, of the essence in any future war.

After the 1971 war, Indian war planners such as Lt General K.K. Hazari had written about the need for a new armoured strategy to decisively defeat Pakistan instead of continually being forced to accept virtual stalemate. In 1975, a study group under General Krishna Rao took forward the process in organisational and material terms.

When General Krishna Rao was the Chief of the Indian Army, he asked a relatively unknown corps commander to conduct Exercise Digvijay for testing a new doctrine for war against Pakistan.

It reached maturity with three strike corps being used in Exercise Brass Tacks, by General Sundarji. This vision of armoured formations slicing towards the Indus framed the strategic context for the expected all-out war between India and Pakistan. The strategy of dismembering Pakistan, however, faces a stalemate – ironically, Brass Tacks was also the first of many instances in which Pakistan brandished its nuclear weapons as a deterrent against conventional rout.

Cold Start was designed to run around this issue. The doctrine reorganises the Indian Army’s offensive power away from the three large strike corps into eight smaller division-sized battle groups that combine mechanised infantry, artillery, and armour in a manner reminiscent of Russia’s operational manoeuvre groups during the Cold War.

According to Dr Subhash Kapila, an international relations and strategic affairs analyst at the New Delhi-based South Asia Analysis Group, Cold Start aims to seize the initiative and finish the war before India’s political leadership loses its nerve. He states-

The Crux of Cold Start

Pakistan must not enjoy the luxury of time. Cold Start aims for eight “Battle Groups”, comprising independent armoured and mechanised brigades that would launch counterattacks within hours.

These Battle Groups will be fully integrated with the Indian Air Force and naval aviation, and launch multiple strikes round the clock into Pakistan.

Each Battle Group is said to be the size of a division (30,000-50,000 troops) and highly mobile unlike the strike corps.

Ominously for Pakistan, the Battle Groups will be well forward from existing garrisons. India’s elite strike forces will no longer sit idle in central India waiting for the opportune moment, which never came in the last wars.

As the Indian military enhances its ability to implement Cold Start, it is simultaneously degrading the chance that diplomacy could diffuse a crisis on the subcontinent. In a future emergency, the international community may find the Battle Groups on the road to Lahore before anyone in Washington, Brussels or Beijing has the chance to act.

Cold Start is also aimed at paralysing Pakistani response. Although its operational details remain classified, it appears that the goal would be to have three to five Battle Groups entering Pakistani territory within 72 to 96 hours from the time the order to mobilise is issued.

Only such simultaneity of operations will unhinge the enemy, break his cohesion, and paralyse him into making mistakes from which he will not be able to recover…

Multiple divisions operating independently have the potential to disrupt or incapacitate the Pakistani leadership’s decision making cycle, as happened to the French high command in the face of the German blitzkrieg of 1940.

Also, rather than seek to deliver a catastrophic blow to Pakistan (i.e., cleaving the country in two), the goal of Indian military operations would be to make shallow territorial gains, 50-80 km deep, that could be used in post-conflict negotiations to extract concessions from Islamabad.

Where the strike corps had the power to deliver a knockout blow, the Battle Groups can only “bite and hold” territory. This denies Pakistan the “regime survival” justification for employing nuclear weapons in response to India’s conventional attack.

What if Pakistan uses tactical nuclear bombs against the Indian Army’s Battle Groups the moment Cold Start is initiated? In Kapila’s view, Pakistan’s low nuclear threshold is a myth – perpetuated and planted by western academia and think tanks.

This suits the needs of the conservative American establishment in whose eyes India is a long-term rival and Pakistan a useful, if unreliable, ally. Unfortunately, India’s political leadership and its uncritical media have been brainwashed into believing that Cold Start has apocalyptic consequences. According to Kapila-

Nuclear warfare is not a commando raid or commando operation with which Pakistan is more familiar…Crossing the nuclear threshold is so fateful a decision that even strong American Presidents in the past have baulked at exercising it or the prospects of exercising it..

Broken arrows: Threat for the West, not India

The spectre of battlefield nuclear weapons under the direct control of commanders who sympathise with Islamic terrorists no doubt scares a lot of people.

Although Pakistan’s strategic nukes are stored in well guarded depots, the miniaturised tactical nukes are harder to supervise 24/7. To ensure battlefield nuclear weapons are used at the opportune time, field commanders need independent charge and prior clearance. (This is why German Army commanders have independent control of American nuclear warheads kept at NATO bases in Germany.)

There is no need for New Delhi to feel alarmed. If, say, the al-Qaeda or the Islamic State manages to get hold of a battlefield nuke, the biggest threat is not to India but to Pakistan and the West. It is the West that made a Faustian bargain with Pakistan in order to target Russia. And like all Faustian bargains there comes a time to pay up. A broken arrow (code for a lost nuclear bomb) from Pakistan’s arsenal is more likely to explode in New York or London than New Delhi.

However, if Pakistan-sponsored terrorists brandish nukes against India, it is Pakistan that will have to deal with the consequences. American strategic analyst, Ralph Peters, the author of Looking for Trouble, says:

Let India deal with Pakistan. Pakistan would have to behave responsibly at last. Or face nuclear-armed India. And Pakistan’s leaders know full well that a nuclear exchange would leave their country a wasteland. India would dust itself off and move on.

Without firing a shot

The beauty of Cold Start is it may never have to be used. It screws with the Pakistani military’s mind and forces the generals to spend time and scarce resources on finding ways to stop an Indian blitzkrieg.

Cold Start also works to undermine the much smaller Pakistani economy. According to Pakistani media reports, the threat of the Indian Cold Start doctrine and increase in India’s defence budget has prompted the Pakistan government to sharply increase its defence budget, further increasing the strain on that country’s fragile economy.

However, if at all Pakistan uses tactical nuclear warheads on Indian armoured columns thundering towards its cities, it would end up devastating its own Punjabi heartland. Most Pakistani cities are close to the border and would become uninhabitable while India would lose only a small part of its army.

General Krishna Rao – as well as his predecessor and successors – have to be commended for devising a brilliant strategy aimed at ending the standoff in the subcontinent. In their view, no country can be allowed to export terror and brandish nuclear weapons at India, without a fitting response.

War In The Nuclear Backdrop

General Krishna Rao also stressed on the need for mobile forces in the backdrop of a full blown nuclear war. In his book “Prepare or Perish: A Study of National Security”, he writes:

“To be able to carry out the task effectively, the attacker will have to have strong forces, comprising armour and mechanised infantry, self-propelled artillery, assault engineers and so on. While intelligence is important even in conventional warfare, it assumes even greater importance under nuclear conditions. Equally, commanders will have to be even more dynamic in nuclear warfare.”

“In the case of nuclear warfare, as the nuclear weapon itself is capable of producing tremendous superiority in firepower compared with that produced by conventional weapons, it is all the more the quality of the forces that matters, and not so much the numbers.

To meet the requirements of the nuclear battlefield, more compact, self-contained, properly balanced and manoeuvrable battle groups with a highly flexible chain of command are required. If the development of the army is undertaken keeping in mind the future conventional battlefield scenario, generally, it would also meet the requirements of the nuclear battle, should there be a change from the use of conventional to nuclear weapons.”