Depoliticising The Learnings From Gorakhpur: Can Public Health Agenda Stand On Its Own Feet? 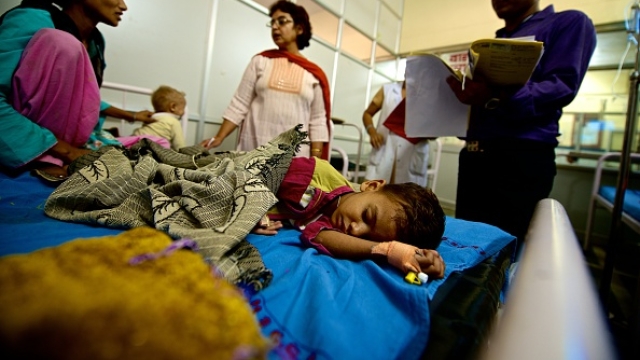 Nearly 70 children have died since 7 August in the state run BRD medical college in Gorakhpur. (Priyanka Parashar/Mint via Getty Images)

In India, very rarely, do we see public health issues attracting the attention of the public or the media, which has in many ways become a reflection of our collective conscience.

It is either a tragedy or a medical emergency that usually reminds us of an ailing public health system. And so is the case with the Gorakhpur tragedy, where nearly 70 children have died since 7 August in the state run BRD medical college.

Why is it that in a country where every day, hundreds of children succumb to infectious diseases like diarrhoea, pneumonia, malaria and even tuberculosis, unheard and unspoken of, it takes a particular tragedy in Gorakhpur to wake us up to a larger country-wide public health problem?

The answer definitely lies in the unfortunate number of infant deaths that took place in the medical college of a district, which also happens to be the political constituency of the newly elected Chief Minister of Uttar Pradesh Yogi Adityanath. Clearly, public health in India cannot stand up on its own and still needs to hinge on to the crutches of political drama, to gain the much-needed traction.

But what this tragedy does offer to us is an opportunity to begin thinking about a systemic change in the state of public health in India.

So, instead of relying solely on a political narrative, let us de-construct the entire sequence of events through a public health lens.

1. BRD Medical College is the only major medical college in Poorvanchal area which caters to the populations from Eastern Uttar Pradesh, Bihar and even the Terai regions. And hence it acts as the only tertiary referral center for most of the terminal and fatal cases of infectious diseases in the area.

2. Incidentally, it was due to a calling attention motion raised by Yogi Adiyanath, the then member of parliament (MP) from Gorakhpur on the issue of Japanese Encephalitis, because of which the United Progressive Alliance (UPA) government assured the parliament of setting up an AIIMS like institution for Gorakhpur in the year 2011. Nothing moved on the ground, until the July of 2016, when Prime Minister Narendra Modi laid the foundation stone for the same.

3. Since then 38 districts of Uttar Pradesh have been declared endemic to what we call as the Japanese Encephalitis Virus. Inclusion of the JE vaccine in the Universal Immunisation Program and mass vaccinations of over 15 crore children by the government has in fact resulted in a significant reduction for JE positivity in children dropping from 35 per cent in 2005 to less than 6 per cent in the year 2017.

4. Similarly, ICMR survey shows that that three of the four children aged 25-36 months in Gorakhpur division have received at least one dose of JE vaccine which correlates with the declining trend for JE positivity in Poorvanchal districts. Additionally, the present government started another major drive to vaccinate 88 lakh children this year.

5. PATH reports show that up to 10th of august, 1180 cases of Acute Encephalitis Syndrome were reported in Gorakhpur, of which 148 children succumbed to death.

6. An important evidence to note is that out of these 1180 cases of AES, only 104 were JE cases and of the 148 deaths only six were JE deaths. Also, if we look at the state of Uttar Pradesh, according to a report by the Directorate of National Vector Borne Diseases Control Programme (NVBDCP), out of the 26,686 cases of encephalitis that were reported in Uttar Pradesh between 2010 and August 2017. Less than 8 per cent of those were due to Japanese Encephalitis and more than 24,000 were due to the cases of Acute Encephalitis Syndrome (AES).

These startling statistics clear the air around the first of the major myths related to the Gorakhpur tragedy: hypothesis that most of these infant deaths were caused due to Japanese Encephalitis. Though, at the same time, this data also throws up an equally worrying fact, that infants are suffering from what is called as the Acute Encephalitis Syndrome (AES), which is an umbrella term for fatal encephalitis (brain inflammation) cases in children being caused by a multitude of pathogens like Chandipura virus (CHPV), Nipah virus (NiV), strepto-coccus bacteria, fungus and toxins; of which JE virus is one of the causative agents.

Thus, doctors are increasingly acknowledging the rising trend of AES cases where identification of the non JE pathogen is difficult but is responsible for the majority of infant deaths.

The second and the more contentious issue is that of the stock out of oxygen cylinders at the BRD hospital when the crisis struck on the night of 10 August. Non-payment of arrears by the hospital was touted as the main reason by Pushpa Sales (the supplier) to halt the delivery of oxygen cylinders to the medical college in the month of August. Thus, the current assessment of the situation suggests that it was the non-availability of oxygen cylinders which led to the large number of infant deaths within a short span of time.

Given the emerging facts, this hypothesis demands a greater reading on our part. Introspecting the following evidence might save us from jumping onto half-baked conclusions and subsequently developing knee-jerk solutions- which might not even be reflective of the larger systemic issues, ailing the Indian public health systems.

Is it not surprising to note that during the Chief Minister’s visit to the BRD hospital (which also happened to be a day earlier), no-one from the medical college quite bothered to bring up the issue of non-payment of arrears which were already ranging to the tune of 70 lakhs?! Not even a single mention of this problem was made by the medical staff on the 9 August during the Chief Minister’s inspection. This ironically was only 24 hours before when the infant deaths started surging rapidly.

Although a magisterial enquiry has been set up to delve deeper into this issue, the health minister, Siddhartha Nath Singh has noted that none of these infant deaths took place between 11:30 pm on 10 August and 1.30 am on 11 August, which is when the supply of oxygen cylinders actually fell short. He added that despite the funds being released by the state, the BRD hospital staff had been sitting on the fund release.

Last, we saw how the exemplary task of providing oxygen cylinders from his private nursing home by Kafeel Khans, the nodal officer for the Department of Paediatrics at BRD college caught the media attention as they celebrated him as a hero.

But wait what did we just say- a private nursing home? This is a perfect eye-opener to the state of health workforce in Indian public health systems. The nodal Paediatrician who is supposed to be catering to thousands of AES/JE cases being referred to the medical college runs his own 50 bedded private nursing home called the Medispring with timings “advertised” as ranging from 9 am-9 pm.

What is even more surprising is the fact that the same doctor was earlier accused of causing financial irregularities in the purchase committee that he was a part of. This is the same committee which was responsible for the purchase of oxygen cylinders. In fact, Dr K K Gupta, director general for Medical Education (Gorakhpur) and other internal sources from the BRD hospital have shared internal information on how it was, in fact, Dr Khan and Dr Mishra (now removed) who were responsible for the acute shortage of oxygen cylinders at first place.

Hence, this tragic incident of infant deaths at BRD medical college should not be dealt merely with a fire-fighting approach, as it has been claimed by most of the reactive media or attention seeking politicians. Simply offering compensation to the families of the deceased or setting up new AIIMS like institutions will not avert a public health tragedy in the future.

If we think a single medical college (in this case the BRD medical college) or an AIIMs will be able to cater to the entire case load from Easter Uttar Pradesh and Terai regions, then we are highly mistaken. Against this backdrop is the issue of un-regulated and expensive private sector, which the poor families cannot afford and of our public health workforce which is running private clinics/nursing homes despite being on government pay-rolls.

So, unless alternative models of public health delivery like public-private partnerships are adopted by the government and development partners, these issue of lack of access, quality and efficiency in service delivery will continue to plague our society.

And hopefully not, the present state of excessive demand being met by a handful of over-crowded and under-resourced medical colleges will remain, and scores of children will continue to die unheard of, in case they don’t happen to belong to the Chief Minister’s constituency.

Every year, hundreds of new health programs are announced to combat various vertical diseases (like in this case- Japanese Encephalitis.) But very little attention is paid by the governments or the international development partners to support the strengthening of health systems from within really. Today it was oxygen cylinders; it could be drug supply and the day after it could even be a pair of gloves!

The reason for such an apathy is the monopolist sate led public health systems, which by their very nature are in-efficient and slow moving.

What is not helping to know is that even the local and international development agencies are happier funding one off vertical programs where they can display success in numbers rather than take up the ownership for technically strengthening the process for public procurement and supply.

The most important area of action is to focus on urgent improvement of public health and sanitation in the endemic districts for JE/AES, especially to tide against the rise of case load during the monsoon period.

Instead of waiting for children to become terminally ill and treating them at the tertiary hospitals, a preventive and promotive strategy should be used to eradicate JE/AES in a time bound manner. This strategy should include a multi-pronged approach focused on increasing the demand for JE vaccination by conducting mass awareness campaigns, installation of toilets, provision of safe drinking water, regular fogging and strong coordination by District Health Task Force set up for JE/AES. Establishment of a Viral Research Center, especially dedicated to the prevention and treatment of JE/AES is a step in the same direction.

Thus, instead of reducing this entire issue to a particular disease or a medical college, it is pertinent that the politicians, academicians and implementing agencies wake up to the larger needs of public health and sanitation in India. What we see is the tip of an iceberg but to eradicate the cause of the problem, a serious introspection and following action shall be needed to build an agenda around public health in India.

The starting points for this national debate could be: questioning the monopolist state-led healthcare delivery systems, introducing PPP models for service delivery to improve access in under-covered areas, drastically improving financial management of health systems including those related to procurement and supply and a focus on public hygiene and sanitation for prevention of disease and promotion of public health in its true sense.