Explained: How To Read Data On India’s Covid-19 Cases In Light Of The Tablighi Jamaat Cluster 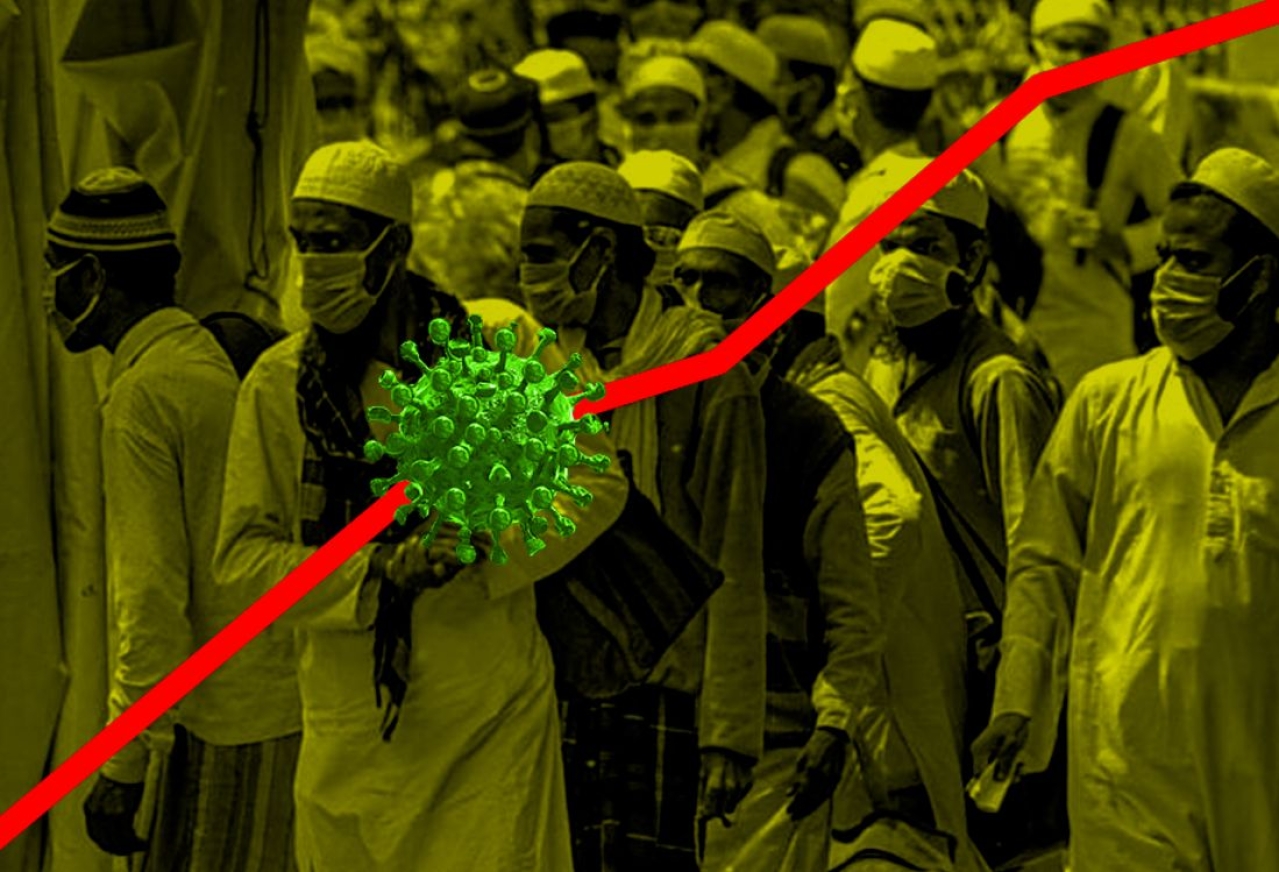 People who participated in the Tablighi Jamaat event

As India comes to terms with the mayhem wrecked by the Tablighi Jamaat Wuhan Virus cluster, uncovered at the end of March in Nizamuddin, Delhi, fears have risen on multiple fronts.

Some believe that the rising numbers, and a sharp, allied reduction in the rate at which the number of cases double, might be indicative of a fearsome spread of the epidemic.

Others fear that the lockdown might get extended on account of this development, further affecting the already heavy burden which has been placed on their daily routines and livelihood.

In this piece, we explain why such fears are baseless. Instead, it is demonstrated that far from being a reason for worry, the uncovering of the Jamaat cluster, followed by an efficient medical quarantine of nearly 22,000 individuals associated with the Jamaat, actually reinforces the government’s views that we are not into that dreaded stage three of the epidemic (community transmission).

This conclusion is based on an important distinction – between the rate at which positive cases are reported, and the actual rate at which the epidemic has spread.

It may not seem so, because the numbers are rising, and every media house worth its salt is busy publishing fancy, colourful plots, graphs, charts and graphics, showing two things – a Juggernaut ascendancy of cases, and an upward shift in case growth trends.

But very few have bothered to take a moment out, and think about the basis on which they produce such commendably attractive illustrations.

This is important, and lies at the heart of everyone’s efforts to try and understand how the Wuhan virus is spreading across India.

So, simply put, most of the Jamaat data is merely ex post facto – meaning, reportage after fact.

Meaning also, that these Jamaat numbers are being added retrospectively onto the aggregate tally, a fortnight after the dispersal from Nizamuddin happened.

Don’t forget that Jamaat attendees have been isolated by the lockdown since 23 March, along with those people they may have infected.

The dispersal event happened on dates prior to 23 March. As a result, the risk of further spread has been minimised.

What we are then seeing now, is the manifestation of the illness – in lockdown, after a period of incubation – again, in lockdown.

A good example is West Bengal. The number of positive cases in that state remained at 53 for three days. On paper, it looked like the epidemic was over. But were we actually to assume that?

Probably not, because if we did, then the mortality rate in that state (three on 53, or almost 6 per cent) would have been the highest in the country – a serious statistical anomaly, and a scientifically indigestible conclusion.

In proof, when the state’s updated numbers did finally come out late on 5 April, the tally went up to 80. It was also noted that the additional 27 cases were distributed roughly evenly, over the preceding three days of non-disclosure.

The point here is that for those three days, one set of analysts might have mistakenly assumed that there were no new cases in West Bengal.

The medical fraternity might have burnt the midnight oil, puzzling over the abnormally high mortality rates in the state.

And the authorities might have had to sit down and consider the merits of prematurely lifting the lockdown there, if indeed, the crisis was abating. And yet, in the end, these and more musings were undone by the reporting of fresh cases, spread over the three, previously case-free days.

Similarly, it is quite possible that the authorities may continue to uncover fresh Jamaat clusters for a few days. If that happens, the numbers will make the total tally bulge, and once again, it will falsely seem like the menace is only expanding.

Thus, it is precisely to avoid such logical fallacies, that the need to differentiate between reporting rates and disease spread becomes paramount.

Can we make that differentiation visually? 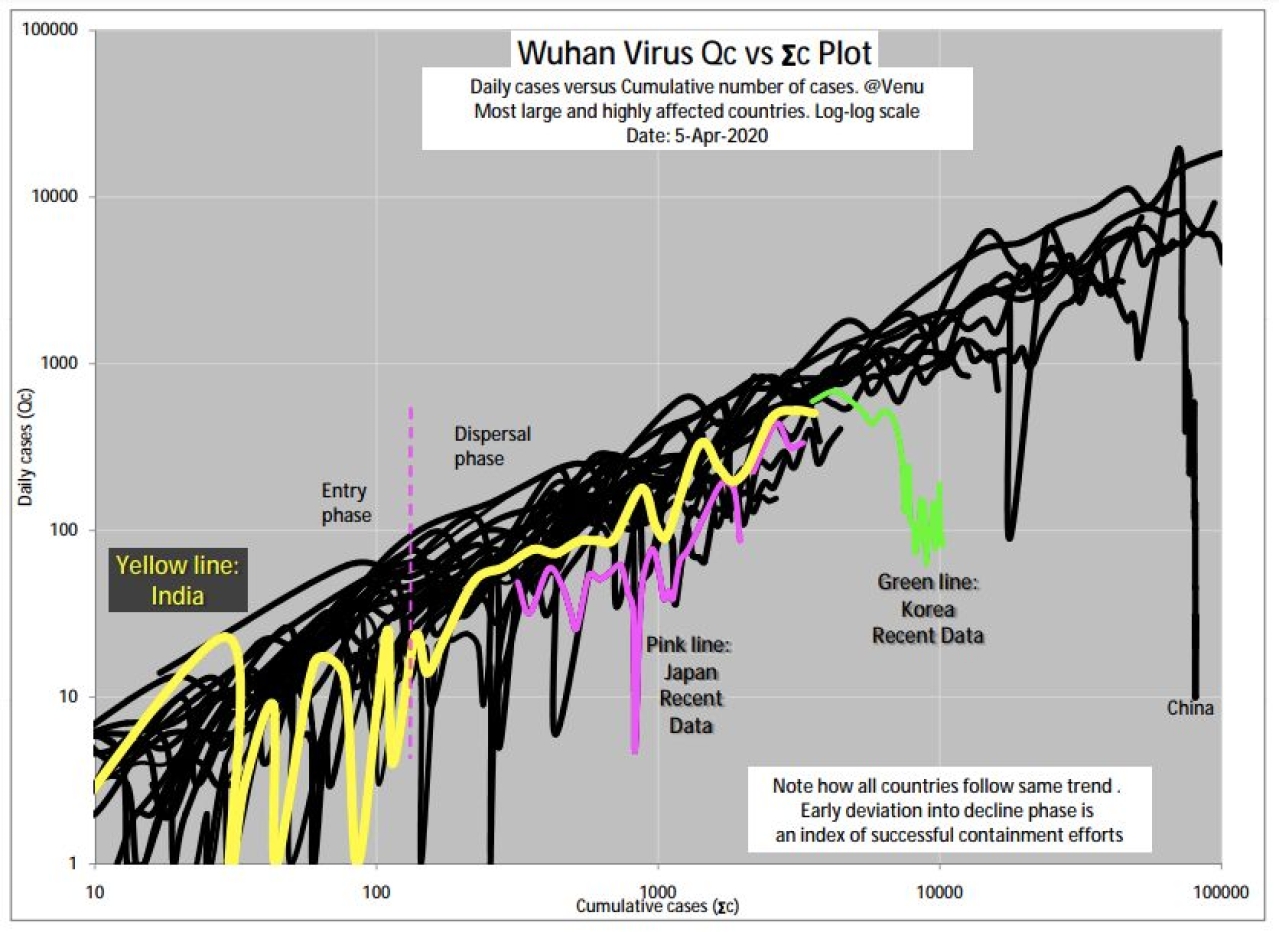 This chart highlights the India data (yellow), against the backdrop of most other badly affected countries (black lines). Note how all countries follow the same broad trend?

For comparison, Japan (pink) and Korea (green) are also highlighted.

Now, follow the yellow India line horizontally, to the right. After an entry phase marked by wild data scatter (early, sporadic identification of cases), the Indian trend settled on a low growth exponent.

It had started to cut across the global trend, when the Tablighi Jamaat cluster came to light. All of a sudden, the trend shifted visibly upwards. But also accompanying this upward shift were major fluctuations.

These fluctuations represent the disjointed manner in which Tabligi Jamaat clusters are being identified and taken into account, and serve to highlight the importance of making the salient differentiation between cases and reporting.

This pattern could continue for a few days, and it is only at the end of this massive administrative effort, of locating and quarantining the Nizamuddin attendees and their contacts, that the actual epidemic trend will start manifesting itself.

In visual terms, on a log-log plot like the one above, it will be an abrupt downward spike – as in the case of Korea (green, further to the right). This is what readers will have to wait for.

How long that will take is a guess, but if Indians continue to follow lockdown protocols diligently, then it is possible that an encouraging downward trend-shift might become apparent in a week.

But, only if all Indians continue to follow government instructions stringently.

Get Swarajya in your inbox everyday. Subscribe here.
Tags:
156 Shares