Extracts From The Arthashastra: A Mauryan Budget 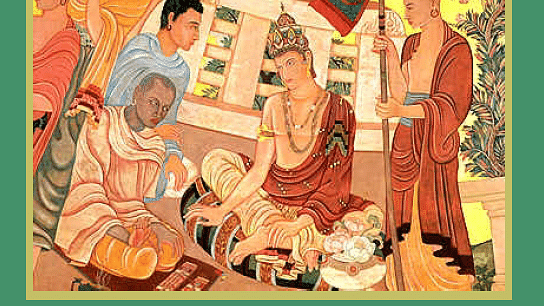 One of the most important events of the annual financial calendar in India is the presentation of the union budget in the Indian parliament, a thoroughly modern attribute of the running of a modern nation state. In actual fact a ‘budget’, leather bag of the 15th century which became a set of fiscal plans in the 18th century, in whatever form or rubric, is essential to the running of any country at any time.

And so it was for the period of the Mauryans.

The Arthashastra of Kautilya sets down a well-defined structure for the financial ordering of a kingdom. It is a theoretical treatise and cannot be taken as a manual of the financial ordering of the Mauryan state. When studied together with evidence from other sources, Greek, Buddhist, Jain and also the inscriptions of Samrat Ashok, however, it appears that Mauryan budgeting could have approximated to the theoretical structure set up in book two of this ancient compendium on politics and economics.

The budget and accounts were to be prepared annually, with the year being of 354 days. Entries were made with reference to the king’s regnal year, ‘rajavarsham’ which was made to coincide with the work year, ending on the full moon day of the month of Ashadha (June/July); what we today recognise as the day of Guru Poornima. Individual date entries were made as per year, month, fortnight and day.

The ‘Samaharta’ or the mantri whom we would call the Finance Minister today, was responsible for the preparation of the budget and accounts. He was to fix the amount of revenue to be collected from all the heads of income and then to arrange the income under the aayamukhas or sources. He was enjoined to show an increase in revenue and a reduction in expenditure and to try and address the problem of excess of expenditure over income if this should arise.

The items of revenue were called the ‘aayasharira’ or the body of income and classified under seven heads, city, country, mines, irrigation works, forests, cattle herds and trade routes.

The incomes from the city consisted of customs duties, fines, income from weights and measures department, issue of passports, liquor, yarn, ghee, goldsmiths, prostitutes, gambling, artists, temples etc. Quite a varied collection of income sources, some which would be frowned upon now! From the country came income from agriculture; salt, minerals and precious stones provided income from mines.

The irrigation-works head collected income from flowers, fruits vegetable sales, etc. and forests and cattle herds collected what we would now call income from animal husbandry. Given the pivotal importance of trade for the Mauryan empire, trade routes were a separate and important head of their own. The revenue from these heads was further classified into seven ‘aayamukhas’ or sources- price, share, tax, duty, levy, surcharge or penalty.

On the expenditure side or the ‘vyayasharira’ there were fifteen heads, including firstly, expenditure for worship of the gods, and charity.

The most important heads were those related to the armed forces, the armoury and the palace. Stores, factories, labourers, maintenance of animal wealth were other important heads of expenditure. Majority of the expenditure was on state account and only a few can be construed as part of the king’s privy purse (salaries for all the royals except the king were also fixed at a specific level).

Expenditure heads do not detail any items spent on state enterprises such as mining probably because the revenue is net income after deducting expenses.

The same principle applies to all items of revenue. Revenue estimate, accrued revenue, outstanding revenue, income, expenditure and balance were the accounting concepts used to try and present an accurate picture of the kingdom’s budgetary situation at the end of the year going forward into the next one. All these are precisely defined in the Arthashastra and it would be an interesting exercise to compare them with accounting standards today.

A budget estimate of the revenue was made at the beginning of the year with refernce to different areas of economic activity and administrative units such as the village, district, region, etc. The Samaharta (or his office) fixed these estimates and they had to be strictly adhered to by the officers responsible for rendering this revenue to the state stores.

Incomes were classified as current, outstanding and derived from other sources; daily revenue was 'current', that belonging to the preceding year or transferred from another sphere of activity was 'outstanding' and fines, compensation, take-over of property, treasure, increase in prices etc. was 'income from other source's.

Expenditure was also classified into four types, day to day, after fixed intervals of time and unforeseen expenditure arising under these two heads classified separately. After the calculation of revenue and the deduction of expenditure from it, what remained was the balance which was received and carried forward.

One should also keep in mind that most of the revenue received by the state was in kind and there was a complex establishment of state stores headed by the ‘Sannidhatri’.

Another office of great significance concerning the budget was the ‘Akshapataladhyaksha’ or the head of the records-cum-audit office, what we now know as the Comptroller and Auditor General. This establishment was completely separate from the Samaharta and the records maintained by it were to check the accounts kept by the Samaharta’s office.

A comparison with heads in the annual financial statement of the union budget for 2017 will be interesting. The receipts into the Consolidated Fund of India are from tax sources, including income tax, corporation tax and indirect taxes, and non-tax sources including fiscal services, interest dividends and profits.

Expenditure is on general services, social services and economic services. General services include the expenditure on keeping the state up and running i.e. expenses on the legislature, executive, judiciary apart from tax administration and defence. Economic services heads include areas such as disbursements on animal husbandry, irrigation, mines and minerals, industries, rural development and transport and communication.

A quick look shows the parallels- tax resources on the revenue side and similar disbursement heads on the expenditure side.

An interesting difference between Kautilyan and modern budgeting, however, is the lack of specific differentiation on capital and revenue account in the former although Kautilya is by no means ignorant of the differences in the impact and implications of the two and we do get hints of the results of different types of spending.

In the words of R P Kangle, the emphasis in modern planning and budgeting is on development but that in the Arthashastra accounting methods is on control.

The complex machinery of accounting and auditing was set up so that the fruits of economic activity accrue without fail, to the State. The modern ‘development’ mantra, for all its failings is the major thrust of budgets today but we do not, of course, hear of it explicitly in the Kautilyan budget. This is in keeping with the Kautilyan focus on getting resources so that the King can spend them on the ‘palana’ or administration of his subjects.

Which of the two led to greater prosperity for the people at large is an open question until a comparative economic study of relative prosperity in ancient and modern India is conducted.