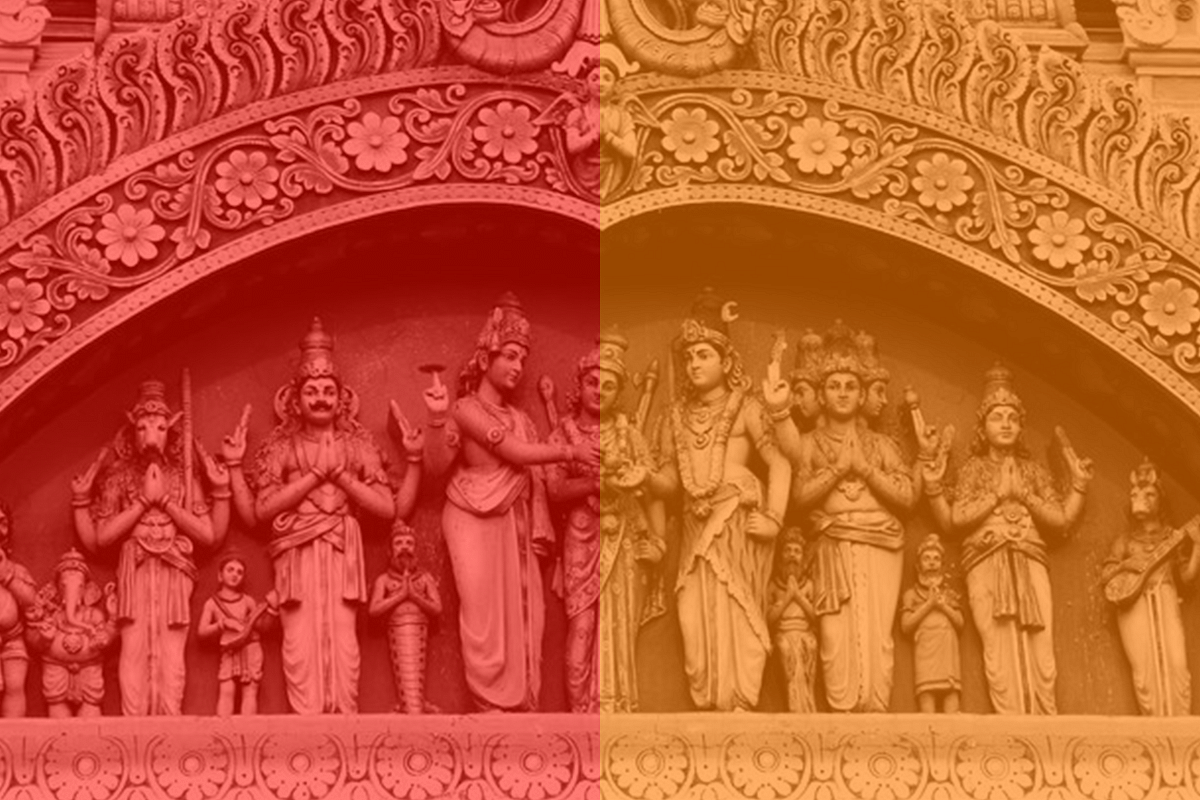 The ‘Free Temples’ movement has now reached another level of momentum.

Sometimes the ideas encapsulated in the form of slogans acquire such intensity that they overshadow every other aspect associated with that idea. This is not without reason. It’s because people are so desperate for that one thing that they couldn’t care less about other consequences.

Take L'Shana Haba'ah B'Yerushalayim (Next year in Jerusalem) — slogan of the Jews which they sung for centuries before eventually forming their own state in part of the Holy Land.

Imagining the Jewish nation without the protection of the Jewish state is unthinkable even today but it’s not the contours of the constitution of a future Israeli state but the passion for returning to homeland that finally delivered the state of Israel. Ditto for the Ram Janmabhoomi movement.

For decades, the battle cry was ‘mandir wahin banayenge’ (We will build the temple at that same place where Bhagwan Ram was born, the sacred land on which Babri mosque stood tall).

It didn’t matter what the model of Ram Mandir trust will be or how the temple will look like. (Though having a consensus on such aspects can give a big impetus to any movement). It’s the destruction of illegal structure first and building of a temple on the same site later that naturally took precedence.

For those with predilection to secular discourse and vocabulary, example of struggle for India’s freedom from British Raj is in order. The idea of independence itself was so strong as to eclipse every other consideration such as the nature of the future nation-state, its constitution or governance structures.

All successful movements flow similarly. The demand to free temples from government control is no different.

This movement, considered a fringe online campaign until recently, has become so successful that the BJP is now promising a different model for management of temples (which doesn’t involve the state) in its Tamil Nadu state election manifesto.

This is an improvement over its Karnataka election manifesto, where the party had merely promised non-interference by the government.

Of course, the BJP’s strategy is not uniform across the country.

While it’s moving in the right direction in southern states, it has been taking over temples in northern ones where it’s in power, whether it’s usurping control of 51 temples via the Char Dham Act in Uttarakhand or Haryana government’s decision to take over administration of Shri Mata Chandi Devi Temple, Chandi Mandir, Panchkula (Chandigarh is named after this goddess) and Shri Durga Mata Mandir at Banbhori in Hisar district.

Many such instances can be found in other BJP-ruled states as well.

Nonetheless, the ‘Free Temples’ movement has now reached another level of momentum, more so after Sadhguru Jaggi Vasudev took up the issue and started evangelising it with a missionary zeal.

This is not a natural, bottom-up, mass movement which the Hindu leaders are responding to but a top down one initiated by a determined minority of Hindu activists who fought against all odds and other Hindus who not only underplayed the importance of the issue for the Hindu society but also wrongly believed that this won’t find resonance among the masses.

It again proves Nassim Nicholas Taleb’s dictum that the intransigent minority, not majority consensus, drives change in the society.

But now that some solution to the temple mismanagement problem appears on the anvil, a bitter fight has broken out between well-meaning Hindus who differ on how the temples should be administered after governments exit.

The differences emerged after the BJP announced its plan of setting up a separate board of saints and scholars to administer Hindu temples.

Another round of bickering followed when former interim boss of CBI and IPS officer M Nageswara Rao (now retired) tweeted saying that "In order to make Hindus of all castes feel ownership of Temples & unite them to ward off threats to Hinduism, INCLUSIVE MANAGEMENT of Temples is extremely important, lest public Temples end up as private fiefdom of cliques as happened with Nataraj Temple, Chidambaram" (Sic).

I went through replies to his tweet and the objections can be summed up as follows.

First, the language used by Rao to refer to Dikshitars as "private fiefdom of cliques" when these priests have selflessly preserved tradition of the temple for centuries.

Second, some objected to his proposal of inclusive management of temples by roping in members from all castes. To clarify, it doesn’t mean that all traditionalists who raise this objection are necessarily casteist (many might be) but most want to continue with different communities, castes or sampradayas having their own temples.

Third, many criticised Rao for advocating to transform the nature of temples — from centres of worship to making them social justice welfare project.

While Rao could have framed his tweet better and avoided using the words he did for Chidambaram Dikshitars, he couldn’t be more on point regarding his proposals about giving representation to people of all Hindu castes in future temple management boards and viewing the temples as more than mere centres of worship and devotion.

Hindu-wadis are traditionalists who wish to preserve traditions and consider that there is no room for ‘reforming’ them because these as the very strengths of Sanatan Dharma and main reason for its survival.

Hindutva-wadis want to weaponise the religion for socio-political purposes — which may involve ‘reforming’ religion to respond to modern challenges that Hinduism faces.

At the root of differences between the two groups on their views on temple control and management is their very understanding of temples and what they are supposed to do.

Hindu-wadis can’t see them as anything other than centres of worship and devotion. On the other hand, Hindutva-wadis view temples primarily as a huge potential arsenal to not only rejuvenate Hinduism but also to fight external enemies.

Both sections of Hindus believe their way is the most beneficial for the religion. The traditionalists cite history to say that the old way has helped preserve the religion for millennia. Hindutva-wadis contend that this is not enough in the modern times.

One can’t help but agree with the latter. Hinduism today needs to do much more than simply make attempts to survive and preserve its rituals, traditions and way of life. It cannot afford to play defensive anymore. That is a sure shot path to defeat.

The geographical footprint of Hinduism has been constantly shrinking. This has not stopped even after independence. The changed demography in border areas of Jammu, Assam, West Bengal, the northeast states, Kerala and Andhra Pradesh are some of the examples that are staring in our face and calling us out for our grand failure.

The loss of Hindu population will be followed by loss of geography itself as has been the case for centuries.

Hindutva-wadis rightly see temples as a force that can not only stem this decline but also give enough firepower to Hindu society to reverse the losses suffered in the past.

This is especially true given the Hindu nation doesn’t have the backing of Hindu state, yet.

Hindu society whose culture, arts, traditions, texts, rituals and practices haven’t been funded by the state for centuries and thus have suffered huge decline can only be rejuvenated with the backing of its temples. The temples alone can emerge as a force which can match the money power of Christian evangelists and create effective cohesion to repel the street power of Islamists.

As author, historian and economist Sanjeev Sanyal wrote few years back, "a defensive tactic cannot work if the community is in a downward spiral in a particular area. It would be far better to focus on expansionary strategies to re-inflate the system. These could include intellectual and cultural innovation, social and missionary work, building alliances with other like-minded religious traditions and so on."

Hindutva-wadis are thus right to ask for a new way to administer temples as opposed to simply going back to traditional methods of management. This new way must have representation of devotees from all Hindu castes. That’s not even debatable. Hindu traditionalists should accept this. This is not the hill they want to die on.

Of course, it doesn’t mean that hereditary rights of priests or hereditary management rights of families should be done away with.

On the contrary, as far as religious aspects of the temples are concerned, they must go on as they have for centuries. The inclusivity proposal is limited to management alone which will deal with aspects that concern all Hindus of the area where temple is located in.

This will not only preserve the traditional nature of temples and maintain diversity of sampradayas, it will also allow temples to play an important role in lives of all Hindus which in turn will make them more invested in temples.

Hereditary priests/families can be given powers akin to super-delegates in future management committees. Most Hindutva-wadis have no problem in this.

Now, Hindu-wadis should also accept that temples today need to become much more than mere centres of devotion.