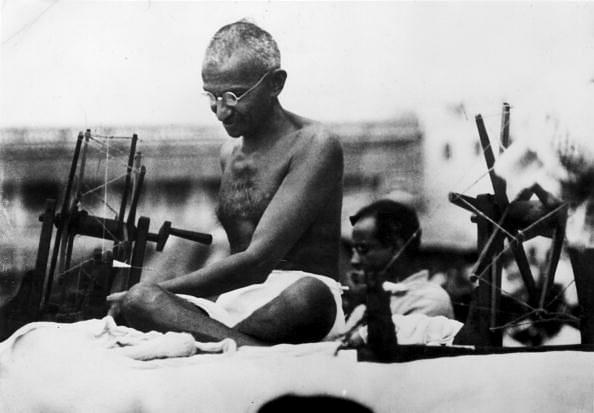 Gandhi at a spinning wheel during a ‘Charlea’ demonstration in Mirzapur, Uttar Pradesh. (Hulton Archive/GettyImages)

The worldviews of Gandhi and that of the Hindutvaites are often posited as diametrically opposite. To characterise Hindutva worldview as being opposed to that of Gandhi, one stream of neo-Gandhians say that Gandhi was actually a modern democrat in the Western sense of the term – influenced by European values and Christianity as against the Hindutvaites, who are depicted as obscurantist-fundamentalists. This characterisation is done by writers like Ramachandra Guha. Yet another stream of pop-Gandhians claim that while Gandhi was a deeply religious person, in a very non-sectarian, Eastern way, Hindutvaites represent a deep secular nation-state in a typical Western sense. Ashis Nandy represents this school of thought. In fact, Ashis Nandy (who is also critical of Hindutva), takes on forcefully the characterisation of Gandhi as being a kind of crypto-modernist, done by the previous ‘Neo-Gandhian’ school:

Many modern Indians who try to sell Gandhi as a secularist find his attitude to the separation of religion and politics highly embarrassing, if not positively painful. They like to see him as a hidden modernist who merely used a traditional religious idiom to mobilize his unorganised society to fight colonialism. Nothing can be more disingenuous. Gandhi’s religious tolerance came from his anti-secularism, which in turn came from his unconditional rejection of modernity.

But Ashis Nandy sees Hindutva as more a western influenced nation-state movement and hence positions it against the worldview of Gandhi.

This is not very correct because the Hindutva movement is perhaps the only socio-political and cultural movement that has taken forward the worldview of Gandhi and has worked on it. Purely in terms of conceptual evolution, perhaps the only political ideologue who could be seen as the inheritor of Gandhian legacy is Pandit Deendayal Upadhyaya.

Unlike Gandhi, Upadhyaya was not a religious man in conventional sense of the term. While he was steeped in the Hindu traditions, particularly Vedanta, he was not a worldly sadhu and he was not moved to act by religious percepts. However like Gandhi, he rejected post-Machiavellian trend of western thought that posited the separation of religious and political ideals. In their attempt to fuse the two concepts, Gandhi and Upadhyaya drew on the traditional Hindu concept of Karma Yoga or spiritual realization through social work. Both accepted the traditional notion that Dharma (individual and social duty) is the legitimate guide for shaping Artha (interest) and Kama (pleasure).

There are also key differences between the two, Anderson notes. While Gandhi stressed on ‘the individual quest for satya’ to inform him of dharma, Upadhyaya emphasised the collective wisdom of the nation as the authoritative voice of dharma. However, it was not majoritarianism either. Anderson quotes Upadhyaya: “The truth cannot be decided by the majority; what the government will do will be decided by Dharma” Historic example that Upadhyaya gives to illustrate this point is interesting and important:

During the Second World War when Hitler attacked France … the then Prime Minister of France, Marshall Petain, decided to surrender.  The French public supported the decision, but de Gaulle escaped to London where he declared that he did not accept the surrender. France is independent and will remain so. From London, he formed a Government of France in exile and eventually liberated France.  … De Gaulle derived his right from the fact that the French nation was above the majority public opinion.

This is a thought process that resonates well with Gandhi’s own thoughts and takes the conception of dharma forward. In the same speech Upadhyaya extends the logic to the demands ‘that the merger of Goa should be decided by referendum, that there should be a plebiscite in Kashmir etc.’ He says emphatically: “National unity is our Dharma. A decision concerning this cannot be made by plebiscite.” In a way this is also why Gandhi opposed Partition at all costs. The apostle of non-violence who was even ready to give the post of Prime Minister to Jinnah to avoid Partition when under British, did not hesitate to bless Indian Air Force in its operations against Pakistani marauders in Kashmir when the Indian State decided to carry out attacks against the raiding secessionists.

Gandhi himself carried forward the idea of Swaraj from Lokmanya Tilak (1856-1920). Before Tilak, Swami Dayananda of Arya Samaj had spoken of Vedic concept of Swaraj. Tilak also had in this the influence of Shivaji who in a letter to Dadaji Naras Prabhu delineated the concept of ‘Hindavi Swaraj’ as early as 1645-6 CE. Tilak considered Swaraj as holy as Rig Veda which he considered as the very basis from which everything Indian had sprung forth. Swadesi was derived from Swaraj just as Sama Veda was derived from Rig Veda. We see in Gandhi the continuance of the same thought process.

In 1931 Gandhi defined Swaraj as a uniquely Indic concept different from the Western conception of political independence:

The root meaning of Swaraj is self-rule. Swaraj may, therefore, be rendered as disciplined rule from within. ... ‘Independence’ has no such limitation. Independence may mean license to do as you like. Swaraj is positive. Independence is negative. ... The word Swaraj is a sacred word, a Vedic word, meaning self-rule and self-restraint and not freedom from all restraints which ‘independence’ often means.

Pandit Deendayal took the same concept further. He considered ‘Chiti’ as the Self of the nation. The democracy and culture of the nation need to be centred around the ‘Chiti’ of the nation. He stated that the loss of the ‘self’ is the reason for the downfall of the nation as well as polity.

According to Anderson, Upadhyaya was ‘far less committed to traditional institutions than Gandhi’:

Upadhyaya’s writings are sprinkled with attacks on caste system as practiced. In his view all institutions are derivative and, when they cease to fulfill the integrating function, they should be revised and abandoned. It is not surprising that orthodox Hindus were among the major critics of the Jan Sangh.

However here Anderson's assessment of Gandhi is not entirely right. Gandhi was against the evils of untouchability and gradually he came to be against the evils of caste system itself. In this he had to face bitter opposition from the orthodox heads of Hinduism. Gandhi also battled for Sharda Act, which stopped child marriage. Incidentally, the act was drafted by Hindu nationalist Har Bilas Sharda. Socially stagnant sections of Hindu orthodoxy did not hesitate to join hands with Islamist politicians to oppose the act.

Of all the sharing of core values, it is in the way they viewed economic development as well as technology for economic development that the thoughts of both Gandhi and Upadhyaya converge with perhaps highest relevance for India’s future. Upadhyaya, with the advantage of being into a few decades of witnessing Nehruvian development model, could adapt and carry forward the seed thoughts of Gandhi expressed in ‘Hind Swaraj’.

Contrary to conventional perception, Gandhi was definitely not a Luddite. Initially, he considered machines and hence technology as inevitable though ideally he considered them a hindrance to absolute freedom: “… machines will remain because, like the body, they are inevitable.” (Young India, 20-11-1924). He wrote: “I do visualize electricity, ship building, iron works and machine making and the like existing side by side with village handicrafts.” (Harijan, 27.1.1940). One can say that Gandhi’s view of technology was really Darwinian in a sense. He was against monoculture of technology just as he was against the monoculture of expansionist religions. To him, technology was inevitable ‘like our own body’. Linking technological development to Swadesi and Swaraj, Gandhi stated that ‘we need to devise our own technology to suit our requirements.’

This view of technology is expanded and presented by Upadhyaya in his Integral Humanism. He looked at the economic system and emphasised that it should not make ‘extravagant use of available resources but should make a well regulated use.’ (ibid, p.65) Technology should be evolved with this in mind. According to Pandit Deendayal, the technology developed should take into account seven factors (The 7-M model) 1. Man (human factor) 2. Material (natural resources) 3. Money (economic feasibility) 4. Management 5. Motive power (energy efficiency) 6. Market and 7. Machine. He said that we should design suitable technologies taking all these things into account and thus evolve a ‘Bharatiya technology’ (Integral Humanism. p.72) – an Indic technology for sustainable development.

In historiography, the Gandhian approach was spearheaded by eminent historian Dharampal (1922-2006) whose scholarly work was supported mainly by Hindu nationalists, from late Sitaram Goel to the Vajpayee government.

Yet another deep Gandhian and an ecological intellectual belonging to Hindutva school, was Ram Swarup (1920-1998). His seminal but forgotten contribution to Gandhian thought was on Gandhian economics underscoring the importance of innovating suitable technologies to make Gandhian economic system viable. As early as 1977, long before the terms like ‘decentralisation’ etc. became fashionable in technological circles, Swarup stated that if we cannot evolve a decentralised form of technology, ‘Gandhian economics would remain a dreamy stuff, soothing to the ear and warming to the heart but ineffective and irrelevant’. However, ‘if an appropriate Third Technology were to be developed, it could be a great constructive force.’ (Gandhian Economics A Supporting Technology, 1977: Also see: The Charkha and the Cow)

Ram Swarup carried forward not only the thoughts of Gandhi on economics but also provided a dharmic framework for a dialogue with religions without the agenda of proselytisation. One of his seminal works Word as Revelation (1980) can be seen as the taking forward of the dialogue Gandhi had with both the monotheistic religions, Islam and Christianity. The dialogues that Gandhi had with these monotheistic expansionist religions, (not always with success in terms of practical politics), had a clarity against their expansionist proselytising tendencies which the establishment Gandhians intentionally and unethically lack. Ram Swarup on the other hand provides the same Gandhian clarity, with a much detailed and deeper analysis of the problem.

Monotheism is not saved by polytheism, nor polytheism by monotheism, but both are saved by going deep into the life of the soul. In the soul, there are no distinctions between the One and the Many. Depending on the cultures in which they were born, mystics have given monotheistic as well as polytheistic renderings and interpretations of their inner life and experiences.

Unlike the ‘pub-Gandhians’ and ‘beef-Gandhians’, the so-called Gandhian intellectuals of the establishment, Hindutva ideologues have contributed significantly to take forward Gandhian thoughts to the next level, adapt them in their own ideological evolution and have spread these values to their cadre-based movements which include Swadesi movements and Bharatiya Mazdoor Sangh (BMS). Many times they even end up annoyingly opposing the decisions of their own sister-party in power – another typical Gandhian trait. In a way, one can say the government run by Hindutvaites alone has a Gandhian check mechanism. In short, Gandhi lives today, evolved and adapted to modern challenges in one or perhaps the only Indic school in Indian polity. It is Hindutva.