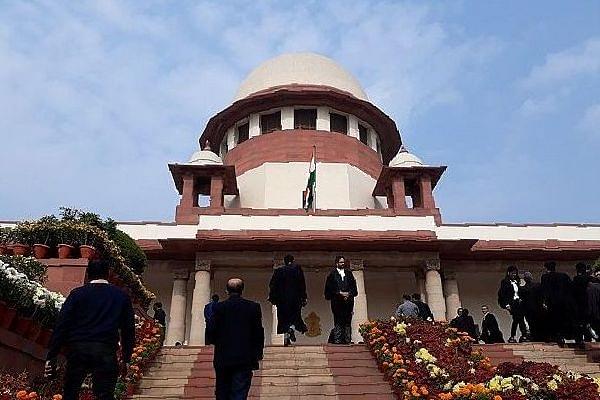 The ongoing protests by a section of farmers in Punjab, Haryana, parts of Uttar Pradesh and Rajasthan against three legislations enacted by the Narendra Modi government has resulted in the Supreme Court being flooded with petitions for and against the laws.

On 5 January, one of those opposed to the farm laws, advocate M L Sharma, startled the Supreme Court challenging the Constitutional (Third Amendment) Act, 1954.

He has claimed that the Act, which included agriculture in the Concurrent List, was not passed in accordance with the law and the subject’s inclusion in the list is unconstitutional and wrong.

Sharma has petitioned that the three farm laws have been passed by Parliament in violation of Article 246 of the Constitution, which earmarks agriculture in the State List.

The passing of the three laws, thus, violates the fundamental right of the citizens, Sharma has claimed.

The Supreme Court bench, headed by Chief Justice S A Bobde and including Justices A S Bopanna and V Ramasubramaniam, has observed that “M L Sharma always files startling petitions".

Attorney General K K Venugopal expressed surprise over the petition challenging the 65-year-old amendment that had no objections from the state governments all these years.

The petition will come up for hearing on 11 January along with other petitions challenging the farm laws as well as the protests staged by the farmers on the borders of the National Capital Region of Delhi.

All About The Three Farm Laws

The Modi government had got the three farm laws — The Farmers' Produce Trade and Commerce (Promotion and Facilitation) Act, 2020, the Farmers (Empowerment and Protection) Agreement on Price Assurance and Farm Services Act, 2020, and the Essential Commodities (Amendment) Act, 2020, — passed by Parliament in September last year.

The laws were passed as part of the government’s Atmanirbhar Bharat Abhiyan to help the economy recover from the novel coronavirus pandemic.

The act on Farmers Produce Trade and Commerce allows a farmer to sell his produce to anyone and anywhere in the country with the government saying it promotes the concept of “one country, one market”.

But the laws are now being opposed by farmers, especially in Punjab, Haryana and parts of Uttar Pradesh, as they have been led to believe by opposition parties such as Congress, Aam Aadmi Party and the Left that these reforms have been brought in to end the Minimum Support Price (MSP) system and favour a few corporate houses.

The Centre has been attempting to allay the fears raised by the false campaigns but is yet to succeed in its efforts.

These developments, together, have led to the Supreme Court being flooded with petitions.

What is the Constitutional (Third Amendment) Act, 1954

The Constitutional (Third Amendment) Act, 1954, which came into force on 22 February 1955, amended the Seventh Schedule of the Constitutions for entry 33 of List III.

List III is the Concurrent List containing 52 items with both the Union and state governments having power over these.

As per the amendment, trade and commerce in, besides production of supply and distribution of products of any industry such as food, cattle fodder, raw cotton and raw jute would come under Concurrent List.

The amendment made it clear that it had been considered expedient in public interest and passed by Parliament as law.

What Does Article 246 Say And Article 254 Remedy

Advocate M L Sharma has quoted Article 246 to say that the Centre has no powers to legislate on agriculture since it is a State subject. He is supplementing his case by challenging the Constitutional (Third Amendment) Act, 1954.

Constitutional expert P M Bakshi in his background paper on “Concurrent powers of legislation under List III of the Constitution” points out that under Article 246 (2) Parliament and legislature of any state shall have power to make laws with respect to any of the matters enumerated in List III of the Seventh Schedule.

Bakshi says that since Article 246 (2) gives power to two legislatures, a conflict can arise between laws passed on the same subject and Article 254 deals with such conflicts.

The law will prevail even if the state legislature passes the law before the enactment by Parliament or after. This will hold good even if any state passes any provision of existing law with regard to the 52 items listed on the Concurrent List.

However, if the state law on a subject in the Concurrent List that could be repugnant to provisions of the law enacted by Parliament gets the President’s assent, then it would prevail in the respective state.

Still, Parliament has powers to enact provisions of the law on the State legislation that has received President’s assent either to amend or repeal it.

The distribution of powers between the Union government and states is based on the Government of India Act, 1935.

The power distribution has been based on recommendations of a Joint Committee on Indian Constitutional Reforms in 1934 which called for the "central legislature to have legislature jurisdiction to secure uniformity in the main principles of law throughout the country to guide and encourage provincial efforts..."

The Indian constitution has undergone over one hundred amendments and the third amendment was in tune with the above recommendations.

The other significant point is that the Constitutional (Third Amendment) Act, 1954, deals with trade and commerce and includes food, cotton and jute.

If the Union government is competent to fix MSP for these crops and also procure foodgrains for buffer stocks, which are later distributed through rations shops, then the 1954 Amendment should stand the apex court’s scrutiny.

It is the Centre that formulates the agricultural policies, including deciding on fund allocations under various schemes and subsidy. Thus, it is more likely that the 1954 Act could stand the test of times.