How Modi Government Is Working To Empower Women Amidst Hate Campaigns 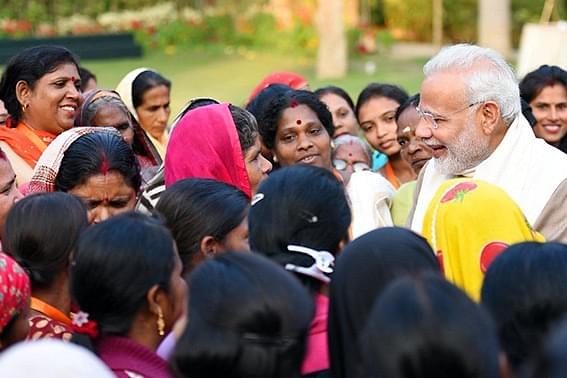 Prime Minister Modi is working with renewed vigour to empower the women of India. (pmujjwalayojana.com)

The hashtag #TalkToAMuslim is the current social media fad, started by a section of people, who supposedly stand for ‘democratic’ and ‘secular values'. Perhaps in the history of independent India, there has never been a more disgraceful chapter than this that has so openly segregated its population. The so-called liberal ‘activists’ on social media who live under the illusion of being the saviours of this country has given rise to a dangerous trend, where it has alienated an entire population of 180 million Muslims based on religion, and put them in a situation, where their very existence has been called to question.

In a country where its constitution, as well as traditions, assure equality and the right to life and liberty, a campaign like this defeats the very purpose of all that the nation has endured so far of ensuring dignity to every one of its citizens. What is ironical here is that of all the voices that were raised in support of the cause espoused by the self-proclaimed liberals, not one of them was heard talking about the real plight of the people they were fighting for.

Considering it was a campaign that stood out for the participation of women, it was disappointing to note that the situation of Indian Muslim women was lost in the din. In a survey conducted by the National Council for Applied Economic Research (NCAER) in 2010, it was found that nearly one-third of Muslims in India survive on less than Rs 550 a month. The figures are staggering and represent the miseries of those thousands of women, who have on their shoulders the responsibility of managing a household with the meagre income that the family earns.

Another instance, where the silence was deafening, was when a man forced his daughter-in-law to marry him in the name of nikah halala, the despicable custom, where a woman cannot go back to her former husband after triple talaq until she consummates a marriage with another man. If ever there was a moment to show solidarity and stand up for women’s rights, it was then. Yet the people who so passionately talk about extending a friendly hand to Muslims in the country, did not find merit in helping a 28-year-old woman stand up for her rights. Perhaps they were all engrossed in teaching a valuable lesson to the nation that shock, and empathy can be selective. Equipped with the all-powerful mobile phones in their hands, a focus on the struggles of real women would not have fetched them enough social media likes to turn them into overnight sensations.

In the midst of all the gimmicks, Prime Minister Narendra Modi and his government have been continuously striving to brighten the lives of those Muslim women, who had given up all hopes. By formulating the bill on triple talaq, the government in the subtlest manner conveyed that it will walk the extra mile to ensure that every woman in this country lives with dignity. Unlike its predecessor government, where every decision had the volatility of vote-bank politics factored in, the Modi government, without succumbing to external pressures, has given women the space that they deserve.

In 1986, when the then Rajiv Gandhi-led Congress government reversed the historic judgment of the Supreme Court in the Shah Bano case to appease a minuscule section of the country’s population, it was evident that women were still given a much lower status in Indian society. It took a leader of vision to take the bold step of providing women of all religions their rightful place.

The idea of open defecation free (ODF) villages also emanated from this idea of giving back the lost dignity of Indian women. Under the Swacch Bharat scheme, 2.5 million villages have been declared as ODF, which means a good number of women no longer have to compromise on their safety and self-respect. Under Swachh Vidyalaya programme of Modi government, many schools saw separate toilets being built for girl child, encouraging more parents to send girls to school and reduce girls dropping out of schools. The focus of the Modi government has never been on asking the women to cover up, but in making sure that women belonging to all religious groups, classes and identities get to live their lives utilising their optimum potential. It is important to note that the biggest beneficiary of the MUDRA scheme are women and religious minorities across the country.

The Congress party, which claims to be the torch-bearer of the rights of the underprivileged in India, is solely responsible for the state of those languishing in poverty. And as with any politically motivated policy decision, it is women who have been at the receiving end when vested interests are at play. It needs to be recalled that in 2012, in a keynote address by the then deputy governor of Reserve Bank of India, Harun R Khan, the importance of financial inclusion and the multiplier effect it can have on the economy were pointed out. He also brought to notice that India remains an underbanked nation due to the constraints of connectivity and spoke about the need to tap into innovative technology platforms. Yet, the great economist Dr Manmohan Singh, who was the then prime minister chose to ignore the findings and relied solely on the sops given by the government to alleviate India’s poverty.

In 2014, the Rangarajan panel reversed the follies made by the Tendulkar Committee report of 2011 which had drawn flak for inferring that households with per capita consumption of more than Rs 33 in urban areas and Rs 27 in rural areas would not be treated as poor. The findings of the Rangarajan panel suggested that in absolute terms, the number of poor in India stood at 36.3 crore in 2011-12, down from 45.4 crore in 2009-10. The statistics called for an urgent relook at the government’s approach and demanded a complete overhaul of the country’s financial system. But the Congress government sat on the report and continued with the rhetoric of inclusive politics.

The situation was reversed only when Modi government assumed power in 2014. In what can aptly be described as a never before attempted social experiment, the government facilitated the opening of nearly 32 crore bank accounts under the Jan Dhan Yojana. Financial inclusion finally became a reality and the poor for the first time became a part of nation-building in its truest sense. The next step of Aadhaar-enabled direct benefit transfer (DBT) burst the theory of trickle-down effect and gave power in deserving hands.

The people who most benefited from such a step are the Muslim women, who got financial independence and identities of their own. Coupled with all this is the Ujjwala Yojana under which 47,327,314 LPG connections were given in four years in 715 districts against 13 crore in six decades. The move liberated women from the confines of their kitchens and gave them new dreams and aspirations to contribute to the growth of a new India.

It is this renewed vigour of Indian women that will see the country progress and achieve greater heights. Modi’s government also has six female Cabinet ministers, perhaps the highest number of women in the Cabinet ever. Almost half of women Lok Sabha MPs belong to Bharatiya Janata Party. The Cabinet Committee on Security also has two women. We must recollect that nari shakti was the theme of Republic Day in 2015 and Prime Minister Modi spoke about women empowerment from the Red Fort during Independence Day speech on 15 August 2014. In the last four years, under his leadership it has been proven time and again that hate can only be answered with actions and the government continues to do it poignantly.