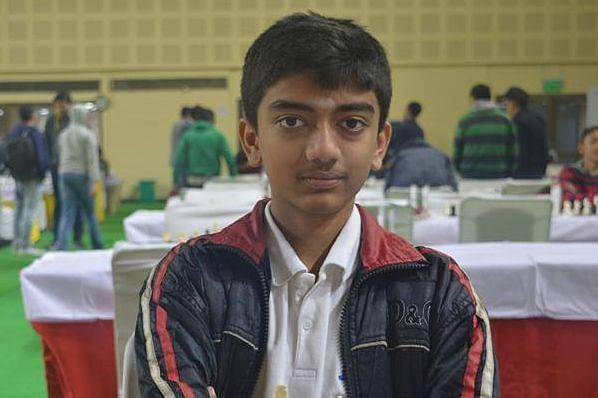 New star on the horizon. Gukesh soon after getting his GM title at Delhi International Chess Grandmaster Open on 15 January. (Facebook)

D Gukesh is not a name that many can recall, especially if they don’t keep track of India’s development in chess. The 12-year-old Chennai kid is a chess prodigy.

On 15 January, Gukesh became world’s second youngest chess grandmaster (GM) at 12 years, seven months and 17 days. He missed being the youngest grandmaster by 17 days to beat the feat achieved by Ukraine’s Sergey Karjakin.

The stupendous achievement of Gukesh has been either underplayed or just not taken note of by the Tamil media, especially the mainstream ones.

Gukesh has been making waves in the last few months. He began catching the chess world’s attention since April last year when he won his first GM norm at the Bangkok Open.

In July, the Chennai wunderkind received his second GM norm when he got seven points out of a possible eight at Paracin Oin Serbia in a nine-round open tournament.

Gukesh had an opportunity to break Karjakin’s record when he took part in Sunway Sitges Chess Festival at Barcelona, Spain, in the second week of December. Unfortunately, he could not get the required International Master (IM) rating.

The Delhi International Chess Grandmaster Open, held earlier this month, presented him with an opportunity to get the GM norm. On 15 January, Gukesh beat Dinesh K Sharma, an IM, in the ninth round to become a GM. Rest, as they say, is history.

Gukesh took up chess as a part of his extra-curricular activity at the age of seven but soon the passion for the game overtook him. A student of Velammal Vidyalaya, Gukesh trains for nearly seven hours a day.

“He began playing chess by just watching his cousins play at the age of six-and-half. He played an attacking game and it was then we thought we should train him in chess,” says his mother Padmakumari.

His first coach Vijay Anand found him to be too good that he decided that it would be better for Gukesh to move on. Then, Gukesh came under IM P Karthikeyan from May 2017. Later, GM Vishnu Prasanna took over as his coach.

Vijay Anand’s decision to let his ward to shift to another coach seemed to have come at the right time. Gukesh ELO rating (a method to calculate relative skill level of players) improved from 2,260 since then to the current 2,497.

For Gukesh to achieve this feat, his father Rajni Kanth, who is a chess player, gave up his practice as medical doctor. The sacrifice of giving up medical practice as an ENT specialist has begun to yield results. Padmakumari, a microbiologist, is the main breadwinner for the family now.

The hard work of Gukesh as well as his parents have practically gone unnoticed in the media. Why have all these achievements been underplayed by the Tamil mainstream media, which relishes the aspect of any Tamil player making it big on the global stage?

A former chess player on condition of anonymity said: “see the media, especially the mainstream ones in Tamil thought they had a story to tell when they highlighted the achievement of Praggnanandhaa. It was because he came from a poor family that was struggling to make ends meet.

“In Gukesh’s case, he belongs to a upper middle class family. The media thinks there is nothing to write home about or even a story. That’s why his achievements has been ignored.”

The chess world, however, sees Gukesh as another bright prospect from India, following the footsteps of illustrious players starting from Viswanathan Anand.