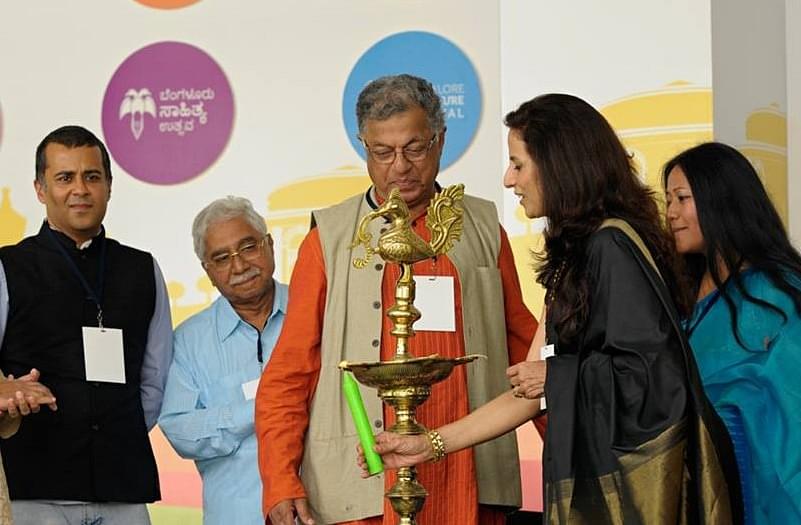 Writers at the Bengalore Literature Festival.

'Mandal' politics of 1990s, which engineered the fragmentation of Indian society and perpetuated caste fractures, created fertile ground to assert cultural/political difference and found legitimacy in that assertion. This climate provided theoretical justification of literature being overtly political; not the politics of a subtle kind, but a kind of contemptuous vulgar exhibition. Contrary to its declared objective of empowerment of the underrepresented, this new thinking literally empowered and enriched its advocates and provided opportunities to them to cash in on this new capital. While finding literature’s salvation in politics, it also created conditions wherein politicians could match authors in terms of literary sensibilities. It was not aesthetics (here literature) which became political; it found aesthetics in politics so much so that caste leaders appeared as protagonists of social tragedies. The words on the page (text of literature) were only entry points for ‘larger’ questions that were lying hidden or not articulated.

This Western academisation of literary studies (through the exposure to critical theory) also valourised a condition, where not reading a text fully or not understanding complex ideas were not impediments, because the new scholar was interested more in asking questions than finding answers. Since the very idea of finding an answer means knowledge of truth, theory-dominated academia demonised the idea of a coherent reading or understanding as truth claims.

Whether theory empowered the scholars or debilitated their experience is debatable, but it brought scores of Western scholars (including Indian-Americans who could accommodate a trip to their home-town through the travel grant) to India on fellowships or on invitation by professional associations and took direct control of literary studies by prescribing select ways of doing literature. For a new generation, given to a demand for new content, reading Kalidasa’s drama or wrestling with Coleridge’s poetry was too cumbersome; so sound bytes such as politics of representation, subjugated knowledge, microphysics of power borrowed from theory replaced literature.

What was elided in this project was the imaginative faculty of the author and the reader’s first-hand experience with the text. The value of literature was no longer in literature; it was outside it. In a politically conscious 1990s, earlier ways of elucidation of work of art and correction of taste (as Eliot eloquently articulated) were seen as too elitist. The only way the author could pass the test of success was in his ability to break the status quo, bring change, create conditions for the rise of the subalterns and their ways of knowing. Very soon this quest will degenerate into another elitist pursuit where the subaltern will be replaced by the knowledge of the subaltern. The scholar will share the subaltern’s experience, but not his wisdom, and the invisibility of the subaltern will be an adequate compensation for their conversion into objects of knowledge.

These days we hear that the role of literature lies in nurturing democracy not because the works of art induce people to think in diverse ways, but authors themselves write in a way so that it can be interpreted through a theoretical framework and go to the market announcing the same. In a session during Times Literary Festival in Delhi, author Amit Chodhuri claimed that Bharatiya Janata Party (BJP) promotes Wahabi Hinduism; another named Gita Hariharan claimed that all writers should be offenders and one Leela Gandhi called award wapsi as swarajic action.

Poetry As Politics Or Politics As Poetry

Though we cannot be sure of its origin, the idea of literature as definitionally political even to the extent of relegating story telling or character analysis to non-issues, must be fairly recent. Usually, the men of the word have a very complex relationship with the world. Though the poet as maker was held in high esteem because of his ability to create, in a politically conscious environment of post-1990s led to a situation where the only way literature mattered is to ‘speak truth to power’. Since all kinds of power (excluding the ones enjoyed by writers and intellectuals) is seen as oppressive, dissent has come to be known as the foundation of creativity in recent times.

This idea of literature as dissent has found expression in questioning Israel and US (but not Saudi Arabia or Venezuela), exposing right-wing extremism (but not Maoism or Islamic fundamentalism), challenging caste dominance (but being silent about caste corruption), demanding to ban Rushdie or Nasreen (while preaching the virtues of toleration) and the list goes on. If in earlier times, the author could be known only through his/her book that allowed divergent interpretations, the authors of the present time cover extra mile in expressing their political positions thus precluding possibilities for alternative analysis of their texts. The so called ‘author is dead’ theory is dead; now the author not only writes literature, but also prescribes pathways to read his/her literature.

Though it would be unfair to say that over politicisation is a new phenomenon, never before in recent memory we had so many authors taking political positions and making it the very reason of their creativity. The award wapsi episode that occupied most of media space is a case in point. This raises questions about the habitus authors come from, the ideas they process and the knowledge they create, which are no doubt elitist and serve to perpetuate their importance as conscience keepers of society. This consciousness raising makes tremendous sense within that habitus or norm circles because in those spaces it is the minimum requirement for such intellectual pursuits. Though literature strengthens citizenship as per this wisdom, more often than not, it creates political societies out of civil society, to use the evocative phrases of Partha Chatterjee.

Instead of creating citizens out of people/population, it often converts already existing citizens into insurgents (without a cause) and derive their creative validity from their ability to produce such mentality. Since creativity of such authors are a tad less appealing or imagination less potent, the reason why messages cannot be articulated through stories, these authors often shed their pretension and overstate politics rather than suggesting them. Taking an avowedly partisan position in matters relating to politics (including electoral politics) is not seen as deterrent, but as an expression of creative faculty.

Literature Festivals And The New Idea Of Literature

Seminars or literary festivals are those spaces, where this new elitism is produced. It is in this elite celebrity environment authors are paid and accorded importance in terms of corporate sponsorship and exclusivity, and where the audience comes to consume a bit of an aesthetic good, which is not corrupted by cheap consumerism. Such events are not about developing reading habits among people or giving them the opportunity to know how a creative mind works. Instead, it creates a hierarchy where elite audience distinguishes itself and its class by moving away from decadent movies or commercial sports. Often authors jostle for space in competition with film stars and politicians for an imaginary idea called social function of literature. The festival directors are caught between paying big authors for getting bigger audience and creating space for upcoming authors. In fact the literature festival as a practice is a misnomer as it invites politicians and other celebrities; that is to say, such festivals convert politics to literature.

Kunal Gupta, the adviser of Delhi Literature Festival, said that since everybody is interested in politics and current affairs, one must be engaged not only with literature but also what is happening around. In a way, the boom in literary festivals runs counter to the reality of book-stores closing down. Performance or 'Bollywoodisation' of literature as in literature festivals has changed the idea of literature. The real estimate today takes place when the author replaces the film star, or becomes the film star, or when the politician/star masquerades as an author. This offers no occasion for serious discussion, but to gaze the author politician/politician author, almost like a darshan.

There are about 70 literature festivals in the country, excluding those organised by universities. The very idea of literary festivals is borrowed from Europe of 1980s and so are derivative in nature. These events boast of coffee houses, restaurants, fabric stores etc, so as to create proper environment for literary consumption. Though the festivals speak of offering spaces for contrarian views, they create an idea of literature that is one-dimensional and partisan. The Jaipur Literature Festival (JLF) in 2012 had denied permission to Rushdie due to agitation by Muslim radicals. The JLF abounds in Oxbridge accents and khadi-clad activists, who gather for cocktails in flood-lit palaces. More than anything else, it offers a place to experiment to be cosmopolitan and liberal, and everything that goes with it.

At a time of deepening democracy and progressive politics that facilitate representation of the marginalised, the cultural elites (such as writers) are transforming themselves by opting to be on the side of the subaltern. If manufacture of consent is what the cultural elites interrogate as is commonsensically understood, the present time of ‘political egalitarianism’ has created an environment, which makes the cultural elite blur the difference between the elite and the subaltern.

In a way, contemporary literary elites get their legitimacy by manufacturing dissent rather than consent. Instead of perpetuating the status quo, cultural elites resist and transform the norms that sanction the status quo. In the process, they reverse the idea of elite as the epistemic and experiential opposite of the subaltern. This is something, which may be called self-othering. It involves a careful revisioning of the elite self by distancing from all insignia that confer privilege and adopting certain types of behavioural traits, clothing, public persona etc. This anti-elite elitism is the hallmark of contemporary writers, notionally concerned with the removal of a hierarchical society or giving voice to the voiceless. Over a period of time, this intelligentsia degenerates into ‘a corporate status system’.