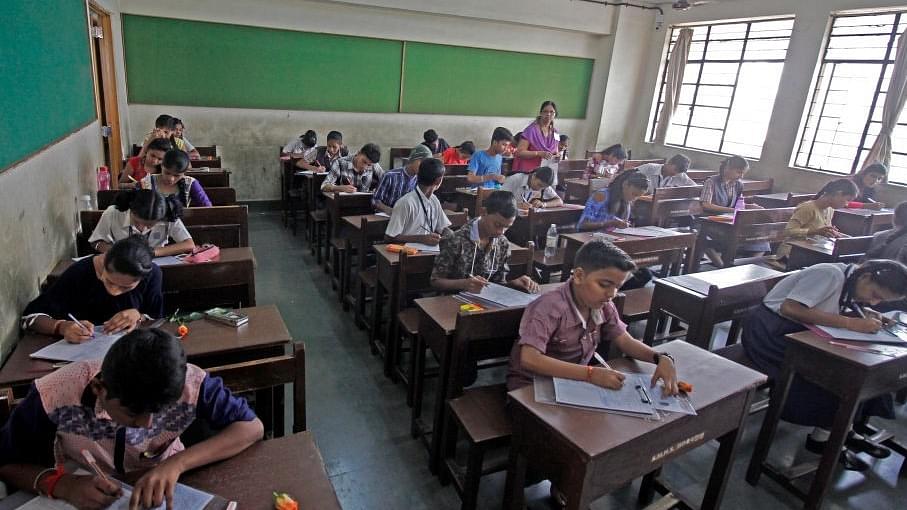 Students at a Mahim school in Mumbai. (Hemanshi Kamani/Hindustan Times via Getty Images)

The Devendra Fadnavis-led Bharatiya Janata Party (BJP) government in Maharashtra and thousands of unaided private schools in the state have been at loggerheads for the past few months over non-payment of dues under the Right to Education (RTE) Act.

According to Section 12 of the RTE, non-minority unaided private schools are required to reserve 25 per cent of the seats in entry-level grades (either primary level or Class 1) for students belonging to disadvantaged groups (DGs) [Scheduled Castes (SCs), Scheduled Tribes (STs), etc] and economically weaker sections (EWS) [income less than a certain amount]. The state in return is supposed to pay these schools, for every RTE admission, the amount equal to what it spends on every child in its government schools. However, almost all state governments have fixed a much lower amount for RTE students. The reason is obvious: per-student expenditure on students enrolled in government schools is very high.

To put things in perspective, take Maharashtra’s example. According to a study by Child Rights and You and the Centre for Budgets, Governance and Accountability, per-student expenditure in Maharashtra’s government schools is Rs 28,630. But it has fixed an amount of only Rs 17,000 a year for RTE students. It is important to note that Maharashtra is one of the better states in this regard.

But that’s not even the worst part. Schools began RTE admissions in 2012, but for five years, the Maharashtra government hasn’t even paid the paltry amount they themselves set. Last year, thousands of private schools threatened to boycott the RTE admission process if their dues were not cleared before the 2018-19 academic session. Education Minister Vinod Tawde had assured them that the government owed Rs 302 crore to private schools for the 2016-17 academic session and will pay them by 31 March. The schools were furious. Who will pay for the 2012-13, 2013-14, 2014-15, and 2015-16 sessions? They also contested the figure given by the minister for the 2016-17 session. Their estimates suggest the dues were more than Rs 1,100 crore. Even after paying Rs 300 crore, schools believe they would still be owed an amount to the tune of Rs 800 crore. This is in no way an accounting error, and points to the different methods the government and the schools employ for their calculations.

Independent English Schools Association (IESA) secretary Rajendra Singh explained to Swarajya what the real reason for the huge gap in estimates was. “The government is only considering the fresh admissions every year under RTE while calculating reimbursements. It is not taking into account the students admitted in previous years under RTE who continue to study in schools for free,” he said.

If Singh is to be believed, the Maharashtra government may be indulging in deception to avoid paying hundreds of crores to thousands of schools.

Here’s how it works (numbers are for explanation purpose only):

Every student once admitted under the RTE at the pre-primary level or in Class 1 will study in the school until they complete primary education, i.e., until Class 8. So what the state government is doing is, it is paying only for the first-year fee of the child while shifting the burden for the remaining seven or eight years on private schools. As we said in the beginning, that first-year fee amount is itself lower than what the government spends on its schools.

What happens when private schools, a vast majority of them budget schools, are forced to teach one-fourth of their students for free? Their own budgets get mangled. The honest ones speak up, take on the government, and go to court, as many schools under IESA have done. Others take the easy way out. They bribe the officials to get their dues cleared. Recently, two Maharashtra Education Department officials were caught taking bribes by the Anti-Corruption Bureau (ACB) in a trap laid by ACB and Old Sanghvi School principal Dominic Lobo. “I was following up with the education department employees about the funds, as, because of the delay, I had also decided to shut my school down. It was only after I asked these staffers if they need anything to release the cheque of Rs 2,900,000 that the duo was convinced to pay up,” Lobo said.

Many simply pay the bribe, take their cheques, and keep quiet. As Lobo’s school is on the verge of closure, it has sent school-leaving certificates to 35 RTE children whom it had admitted earlier. Now, the right to education of these poor children is in jeopardy.

That’s not all. While schools in the bigger cities like Pune, Mumbai, and Nagpur are able to fill up their 25 per cent quota, schools in small towns find it difficult to do so. Thousands of seats go vacant in these areas as schools aren’t allowed to fill these with open-category students. The government doesn’t pay for these. The Act allows for reimbursement on a per-student basis and not a per-seat basis.

The National Independent Schools Association (NISA) chief for Maharashtra, Bharat Malik, was quoted by The Hindu as saying: “It is unfair to not allow such schools to fill up vacant seats with open category students in case they are unable to find poor students.” Rajendra Singh of IESA told this author, “We are not even demanding the amount for RTE seats that we are forced to keep vacant throughout the year because it will only deflect attention from our main demand, which is to pay us reimbursements for all RTE students for each year and not just for fresh admissions.”

Adding insult to injury, the state government in 2015 tweaked the rules and decided that it won’t give RTE reimbursements for children enrolled in the pre-primary classes and will only do so for children from Class 1. “The state still has not deposited Rs 70 crore towards funding pre-primary education as ordered by the Supreme Court earlier. Why should 75 per cent of fee-paying parents bear the expenses of the 25 per cent RTE seats that the state is not paying for?” asks Malik.

Let’s return now to the government’s claim that its calculations are right. It has paid Rs 302 crore for 260,982 children admitted under the RTE in the state in the last five years. That translates to a per-student payout of Rs 2,314. According to schools’ calculations, the figure is Rs 8,483 per child, per year. Given that the state government will be paying Rs 17,000 this year for each RTE admission in the current academic session, no prizes for guessing whose calculation is closer to reality.

According to this article in MoneyLife, as much as Rs 3,634 crore earmarked for implementation of the RTE Act is lying unused since 2011. The central government alone has provided Rs 4,500 crore for this purpose. This figure is likely to account also for the Sarva Siksha Abhiyan allocation and not just the RTE. The government should tell us why it isn’t using the money allocated by the Centre properly.

In any case, for a state like Maharashtra, with an annual expenditure of over Rs 3 lakh crore, bickering over a few hundred crores and getting entangled in court cases seem irrational and imprudent. It is indeed sad that thousands of students are facing difficulties in admission as hundreds of schools across Maharashtra have boycotted the RTE process. The right to education of those who are currently studying under the RTE quota is under imminent threat if these schools close down for a lack of money.

Postscript: The reasons and figures provided in this article regarding the mismatch between government and schools estimates is based on wide-ranging discussions with various school association heads and members. To confirm the veracity of their claims, Swarajya reached out to the office of Nand Kumar, Secretary in charge of School Education, but our calls elicited a standard response, “Sir meeting mein hain (Sir is in a meeting).” We e-mailed them. No response for days. We called again, after which we were told that we should contact Suvarna Khatak, as she oversees 25 per cent RTE implementation. We did, and then got the same “meeting mein hai” response. We wrote a mail, but didn’t get a reply for days. Then we called again and we were told our mail has been forwarded to Santosh Gaikwad, who is the right person to talk to about our queries. He couldn’t be reached on phone. After playing “office-office” for the last 15 days, we decided to publish this story. If and when we receive a clarification from the government, we will update the article.