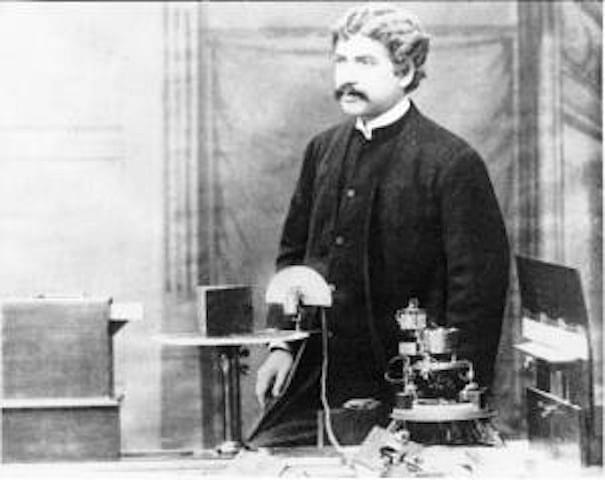 In April 2016, in the renowned journal ‘Frontiers of Psychology’, Anthony Trewavas, a molecular biologist from University of Edinburgh, who has been working on plant perceptions, published a paper in which he stated:

Environmental awareness likely indicates consciousness. Spontaneity in plant behavior, ability to count to five and error correction indicate intention. Volatile organic compounds are used as signals in plant interactions and being complex in composition may be the equivalent of language accounting for self and alien recognition by individual plants.

The paper has 96 references. The oldest reference was the work of JC Bose: ‘Plant Response as a Means of Physiological Investigation. New York, NY: Longmans Green and Co.’ 1906 – 110 years old.

Jagadish Chandra Bose represents that rare breed of scientists who belonged to the future than to the time they lived. When the world of science was totally dominated by the binary conflict between materialism and vitalism, he charted a new course that looked beyond the binaries. Today as science grows deeper and enlarges its canvas broader, Bose’s pioneering work receives more attention.

Nevertheless there is a strong tendency in the leftist circles in India and in a dominant section of old media, to label Bose as an ‘eccentric’ or ‘failed’ scientist just because, Bose is supposedly considered the ‘a hero of the Vedic science tradition’. They claim for example that Bose ‘tried to prove the existence of consciousness in plants and animals’. (Nanda, 2006, p.107). In reality Bose was far more careful and scientific in his exposition of the nature of plants being ‘sentient being’, diametrically opposite to the picture his modern day detractors try to paint through distortions. In the convocation address he gave to the University of Punjab, in the year 1924, he stated:

There are some … who without any proof, but through mere sentimentality, attribute to plants every human qualities. But these imaginings cannot in any way advance exact knowledge.The similarity if any, between plant and animal life can only be established by demonstrating the unity of physiological mechanism of all life.

A case in point is Bose’s investigation of the phenomena ‘the praying palm tree’ of Fraidpore and the ‘weeping mango tree’ of Calcutta.

A mango tree in Calcutta started 'weeping' punctually at 1 p.m. and used to shed one drop every two seconds. The drops started to slow down one per five seconds at 2 pm; eight seconds at 3 pm; fifteen at 4 pm and 150 at 5 pm and after which it ceased till the next day at 1 pm. Bose thoroughly studied the phenomena and demonstrated to the public that it was due to the variation in the temperature and its effect on the sap-pressure.

His work on 'praying palm tree' in Faridpur is even more interesting. Here was a date palm which was already inclined by 60 degrees. In the evening when the temple bells rang for prayer, the tree moved as if prostrating itself before the Deity. Far from giving any ‘mystical’ or ‘occult’ explanation, Bose conducted a rigorous study and proved that the cause of the plant movement was actually it being receptive to temperature variations and not devotion. So here you have a scientist who actually debunked a supposedly supernatural phenomenon with a scientific explanation and yet we see leftists labelling him as a failed scientist – just because he held high Indic philosophy.

In the paper presented at the 18th European Conference on Modern South Asian Studies, Meera Nanda claimed that Bose’s work on sensory perception in plants had been 'discredited' and is 'now the province of eccentric biologists like Rupert Sheldrake and the rest of the paranormal crowd'. However a study of the direction that modern science takes falsifies the claims of Meera Nanda and her tribe.

In December 2014, 'New Scientist' ran a cover story titled 'Smarty Plants'. The article claimed that it was 'Indian biophysicist Jagdish Chandra Bose' who laid the groundwork for what some today call “plant neurobiology”.' The article went on to say that Bose was well ahead of his time and that it was only in 1992 the mechanism Bose proposed—namely electrical signalling in plants—started getting recognized widely in the field of plant physiology.

So when the leftists and a section of the establishment media in India started labelling Bose as a scientist ‘whose theories were proved wrong’ and as one who is popular only in the ‘paranormal/pseudo-scientific crowd’, his works were getting revisited at least for a decade in peer-reviewed international journals on plant physiology. And the trend has been increasing.

Daniel Chamovitz, a biologist with Tel Aviv University, published in 2012 a book in collaboration with the ‘Scientific American’. Titled ‘What a plant knows’ the book explored plant perceptions and responses. Here he visited the work of Bose. Chamovitz points out that far from being falsified, Bose's work on electric signalling in plants was vindicated: '...subsequent studies in many labs have since shown that Bose was indeed correct.'

Reiner Stahlberg another molecular biologist working in the field of plant electrophysiology places Bose as one of the pioneers of the discipline along with Darwin. Famous botanist Paul Simons wrote that failure to accept Bose's experiments stalled research in plant electric signalling for many years. Yet another eminent botanist V.A.Shepherd while affirming the Vedantic non-dualist foundation of the philosophy of Bose’s science states that ‘we may find some fresh inspiration from Bose's philosophy and plant research’.

To claim that Anthony Trewavas to Daniel Chamovitz, ‘New Scientist’ to ‘Scientific American’ are all ‘paranormal crowd’ would be to put it gently, ridiculous. However the real problem with Indian leftists is their aversion for anything Indic. The colonial prejudice that Bose himself met at the Royal Society which still animates the vested powers in the citadels of Nehruvian-Stalinist academia and media.

Bose himself was interested not just in the metaphysical implications of his research. He aimed at uncovering the 'the complex mechanism of the animal' and that such unravelling would evolve 'naturally' in the solutions to be found in 'simple vegetable life'. And ultimately this would mean 'very great advance in the sciences of general physiology, of agriculture, of medicine and even of psychology...'. Amrit Bazar Patrika dated January 19, 1918 reports, how Bose demonstrated the practical utilities of his instruments: "A seedling which on account of the winter season appeared stationary jotted down by taps on a moving plate, the rate of its growth. The application of a chemical instantly arrested this growth, but an antidote timely applied, not only removed the torpor but enhanced the growth at an enormous rate. ..." Bose went on to explain how understanding the way numerous factors affect the growth so minutely and thoroughly would enable adjusting 'the strength and duration f application and that unless 'factors that determine growth are each to be studied in detail, and the laws of effect of each to be discovered, there could be no real advance in scientific agriculture until this is done.'

Bose never opted for commercialization of science and tried to institutionalize such a culture through Bose Institute which refuses patenting to this day. Thus in Bose we have a scientist-seer who resonates with Indian spirit and values in the most profound sense of the terms. Bose is to plant physiology in particular what Darwin is to biology in general. It is time India starts celebrating his birthday as ‘Bose Day’ for the holistic study of the phenomenon of life.