Jio Institute: Why The Modi Government Is Misguided In Giving The ‘Eminence’ Tag To A Select Few 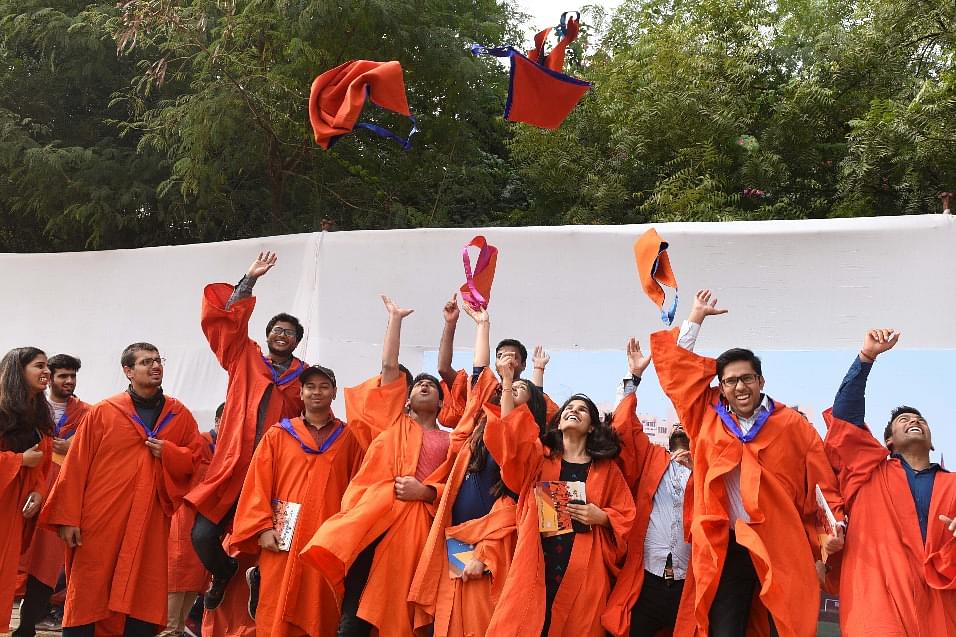 Scholars celebrate after the 48th convocation of Indian Institute of Technology (IIT) in 2017 in New Delhi. (Mohd Zakir/Hindustan Times via GettyImages)

One of the first major initiatives that the United Progressive Alliance (UPA) government undertook after taking office in 2004 was creation of special economic zones (SEZs). The laws governing land, labour, capital, taxes and other aspects of business were a nightmare. In the backdrop of this mesh of regulatory hotchpotch, conception of SEZs should be understood. One can argue, the government’s intentions were good. It wanted to emulate China’s success on this front and had little political capital to expand in reforming tough laws. So, it opted for a convenient way out. One would accept this line of reasoning if it was an exception and not the rule. Just when the SEZs were being set up, the UPA amended the constitution to introduce quotas in private education institutions but kept the ones run by minorities out of its ambit thereby creating special education zones.

Separate laws for separate groups is the core of Congressism. While the BJP is busy making India ‘Congress-mukt’, Congressism is as strong as ever. The BJP has made it bipartisan by faithfully implementing its policies in the last four years. The centre’s latest announcement to create special education zones aka ‘institutes of eminence’ (IoE) is only the latest demonstration of the BJP’s conversion to the Congress’ ideology.

Many supporters of the move say “Oh, at least, they are making a start by freeing some institutions. Isn’t it better than the current regime where everyone is worse off?”. Well, if giving the type of autonomy that comes with the IoE tag can help institutions break into club of world class institutions, why not give the same autonomy to all? Why have only six institutions in top 500? Isn’t it better to have 50? Replacing University Grants Commission with a reformed body like Higher Education Commission is the right approach which the government has already kicked off. In light of that, it sounds silly to award these IoE tags.

Also, giving IoE licenses doesn’t have simple cause and effect relationship that you give these institutes IoE tag, they become world class, then you give the license to next batch which in turn become world class and so on. Creating different rules for different players will have serious multi-order ramifications where actions have consequences which in turn have their own consequences.

The problem is most do not understand the repercussions of carving out special areas, giving some players exclusive access to ease of doing business or exempting minorities from the government regulation in education sector. When you do this, you divide the people in two blocks: one to which rules are applied and the other to which they are not. You get to pick who goes in the latter category. Then you toughen up the general rules, put more regulations and implement the laws with great force. In a short span, the winners you picked end up owning the field. You may say you wanted to make right to education a reality for all or that you set up SEZs to propel growth and investments, but all you end up doing is helping your friends beat the other side, be it in business or education. This Congressism is unethical to the core and must be opposed tooth and nail.

But how can one expect the opposition and its supporters to critique the IoE policy of the Modi government in good faith? They have cheered on this Congressism all their lives. It is no wonder then that the only criticism they have been able to muster up is outraging on giving Jio university status of ‘eminence’. Their problem is they don’t like Mukesh Ambani and he got the license. Their outrage would have been far more restrained had the corporate house they like got the IoE tag. Take the tweet of an ‘eminent’ historian. His lament is why the ‘greenfield’ university helmed by Raghuram Rajan didn’t get ‘eminence’ status. He is not opposed to the idea of the government giving unbridled autonomy to a greenfield university at par with the likes of IIT Mumbai and IIT Delhi. He just wants the people he likes to get picked.

If the sole basis of criticism is that why Jio got the tag, then it wouldn’t stand scrutiny. Out of 10 who applied in the greenfield category, only Jio qualified based on four parameters: availability of land, highly qualified team, sufficient funding and a concrete strategic plan. Given Ambani’s status of being the richest person in the country, it is not unthinkable how he could pull this off better than others. If all details are made public, it is very likely, Jio’s proposal was indeed the best.

What is needed is a principled opposition to the idea of giving the IoE status to ‘greenfield’ institutes itself. This category shouldn’t have existed in the first place. Once it gets IoE status, Jio institute won’t be competing with only those who are setting up ‘greenfield’ category of institutes but with everyone out there including numerous decades old private universities which have proved their excellence and have stellar track record. How can an upstart buy its way out of regulations that are applicable to its competition just by the might of its money power?

After the outrage over Jio ensued, MHRD issued a clarification in Q&A format. To the question “How can an institution which is currently not running be selected for the position of and institution of eminence?’, the ministry’s counter was: “because the Clause 6.1 of the UGC (Institutions of Eminence, Deemed to be Universities) Regulation provides for this”. This is typical bureaucratic non-answer. The questions is not why Jio got the tag under the rules but why there are such rules in the first place. As I said before, Jio has got the status by beating its similar opponents (fair enough) but its status puts it at great advantage vis-a-vis its competition in the market which is patently unfair.

Jio institute’s selection gets murkier when one reads how the committee couldn’t even come up with a list of 20 institutions that deserved the status. When asked why so few private institutions made it to the list, N Gopalaswami, the chairman of the selection committee, said:

Most of our universities and institutes have focussed on teaching rather than research and the latter is a strong component and parameter on global rankings. While some of the public institutions which have been set up long back had invested in research over the years, the private institutes in India are relatively younger and have mostly come up in the last two to three decade- hence they have focussed more on teaching. While about 20% universities have worked towards building research ecosystem only about 5-6% of the private institutes have done so. That is why they have a lower chance of going up high on academic rankings in a ten-year span.

As things stand, the government has made a hash of things with its ill-thought out policy.

Second, after studying the UGC regulations on IoEs, it seems the government’s diagnosis for our poor performance in global rankings is: lack of funding and lack of autonomy. If this is really the case, regulatory regime should be overhauled in toto. Autonomy should be increased for everyone and funding should be tied to results. Monetary awards can be given to private universities also (even the one run by Ambani) if it improves its performance and delivers on pre-set outcomes. That would be much more transparent and ethical than the current approach of picking the winners in advance.

After thousands of crore worth taxes foregone and precious time wasted, Special Economic Zones remain a failure today. Similar failure awaits the Special Education Zones because the government has got both the diagnosis and prescription wrong. In a critical area like education, this is suicidal especially in India where we have, at maximum, another 10 years after which the demographic advantage will be lost. If we squander the opportunity now, all we will have is repentance. The future generations will be less kind to Modi government than he, his party and his supporters are to Nehru-Gandhis for wasting decades and keeping India poor by their disastrous policies.