Labour Reforms With A Subsidy Smokescreen: A Case Of Signal Left Turn Right 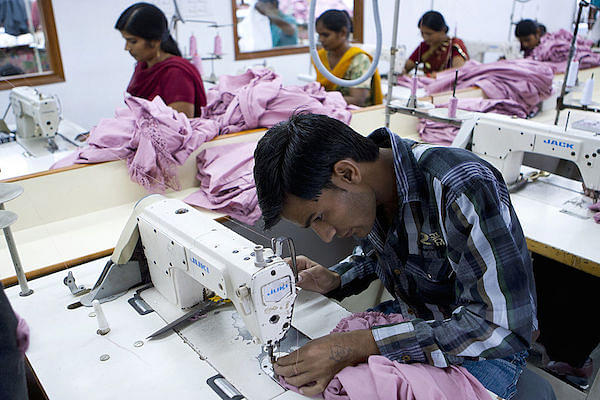 Yesterday, the Cabinet approved a ‘special package’, which is aimed at increasing employment generation and exports from the Textiles and Apparel sector. As with any government package, the usual subsidies are being offered:

One, an additional 10 percent Technology Upgradation Funds Scheme subsidy for garment factories, which is above the already existing 15 percent subsidy.

Two, an additional 3.67 percent EPF’s employer contribution (over and above the government 8.33 percent, already in place).

Every new administration thinks putting more taxpayer money into the textile sector will be a good way to generate employment and encourage more investment. The Narendra Modi government is no different. However, these subsidies are NOT the most important part of the textile package. ‘Labour reforms’ is a part that has mostly gone unnoticed by the media, except by the Financial Express.

With an eye on the elections in Uttar Pradesh and keeping in mind the fact that the BJP doesn’t have the numbers in the Rajya Sabha yet, a GoM headed by Arun Jaitley had asked the Bandaru Dattatreya-led Labour and Employment Ministry to put a brake on reforms. These changes would have enabled employers to retrench upto 300 workers (in the case of an emergency), women to work in night shifts, shops to open round the clock and much more. By stalling it, the government seems to be going through an indirect route wherein they introduce labour reforms to targeted sectors, while clubbing it with a subsidy boondoggle.

Two, introduction of Fixed Term Employment- along with parity between fixed-term and permanent workers.

Three, employee’s contribution to EPF will be optional if they are earning less than Rs 15,000 per month.

T N Ninan points out in The Turn of a Tortoise: The Challenge and Promise of India’s Future:

‘…India’s labour laws come in the way of flexible manning. Nor does the law allow freedom to operate longer shifts (as an exporter explained, workers are more productive towards the end of the day than in the first hour or two). Whatever the reason, buyers surveyed by McKinsey, the consulting firm, said that while the majority were planning to shift some of their sourcing away from China, they favoured Bangladesh, Vietnam, Indonesia and Cambodia as new destinations. India did not figure in the list.’

Increasing the overtime limit by 156 percent will certainly help increase the productivity of labour in the textile sector. The change, along with the introduction of Fixed-Term Employment, will contribute to bringing in flexibility in manning decisions and will go a huge way in increasing employment in this sector. The lack of flexibility in manning decisions is one of the important reasons that textile units stay small.

As the Chief Economic Adviser Arvind Subramanian and Rashmi Verma point out: ‘...an estimated 78 per cent of firms in India employ less than 50 workers with 10 per cent employing more than 500 workers. In China, the comparable numbers are about 15 and 28, per cent respectively.’

Large textile units are more productive and efficient than the smaller ones. Indian labour market regulation forces companies to stay small so as to escape the onerous regulations they will have to follow, if they become significant. These actions impact our competitiveness in international markets. As of now, much smaller countries like Bangladesh and Vietnam contribute a much larger share than India. One should think about how effective government subsidies for this sector have been over the years.

The third part of the labour reform is yet to make the employee’s share of EPF contribution optional for workers earning less than Rs 15,000, will primarily help the unskilled textile workers. They will now have the option of taking home a greater pay (e.g., women in families migrating from villages to cities). Given all the above, employers will now have an incentive to ramp up the size of their operations by increased investment. The ratio of jobs to investment in the textile and apparels industry is the highest among all Indian industries, at 31.1 jobs per million investment. It is rational to expect a strong employment growth in this industry. This helps to increase the competitiveness of the industry at a time when we will soon face relative tariff disadvantages in key export markets.

Finally, the most significant aspect of yesterday’s decision is that the Union Government has succeeded in pushing a right amount of labour reforms through special packages for targeted sectors, without much opposition. We will most probably see more such reforms, aimed at other areas like food processing and steel.

It is pertinent to note that NDA states other than Rajasthan, Gujarat and Madhya Pradesh, like Haryana and Jharkhand, have taken up the fight concerning labour reforms. Gujarat also allows relatively relaxed labour regulation in National Manufacturing and Investment Zones. As @centerofright points out, they can also allow relaxed rules in Coastal Economic Zones. The government seems to be interested in labour reforms but doesn’t want to say it openly.