Lending A Helping Hand To Farmers: How Art Of Living Is Giving A New Lease Of Life To Water Sources 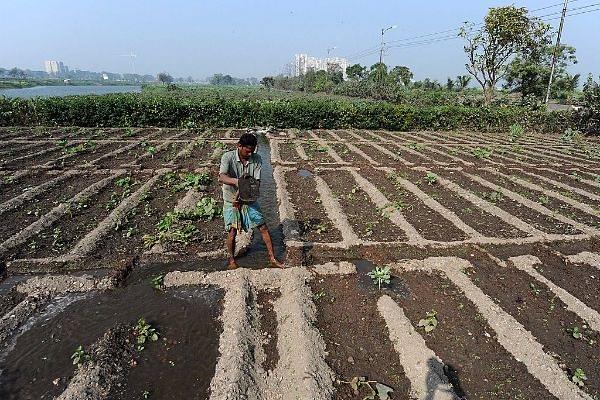 About 70 per cent of the world’s population or about 4 billion people live in areas that suffer at least a month long scarcity of water, according to National Geographic data. Fourteen out of 20 major cities in the world are staring at more punishing droughts and floods that are getting worse and more frequent.

So we have a situation where due to climate change, poor water management, industrial pollution and indiscriminate abuse of resources and borewell drilling, more cities including Bengaluru could see their ‘zero day’ or ‘peak water’ soon, like Sao Paulo and Cape Town. Zero day is when the city has reached its usage limits of usable water drawn from an area. But experts say solutions exist.

B K Thimagauda, a farmer in Chikmagalur, throws a stone into a borewell and listens to the reassuring sound of the stone hitting the water so near to the ground. “I had sunk a borewell up to 450 feet to irrigate my farm which had gone dry but after the rejuvenation work done, I get water at 10 feet itself,” he said. Chikmagalur had been in the throes of water scarcity since 2009.

“My farm is next to a lake which has been dry for two decades and my borewell used to have only 1.5 inches of water with which I could only irritate 1 acre of land,” says Muniyappa, a farmer in Thyamagondlu.

“Thanks to Art of Living, the lake is now restored, my borewell now has 3 inches of water and I can irrigate twice the amount. There are eight villages around us that have no water and rely on us for water supply. To help, every day for 1.5 hours I give them free access to water, and despite this, our village is still water abundant,” he said.

Under the guidance of Sri Sri Ravi Shankar, founder of The Art of Living, the organisation has been similarly working in many Indian states, reviving 40 rivers and tributaries, including five in Karnataka, using the mix of technology, building recharge structures, desilting, agro forestry, introducing natural farming practices (different from the more expensive organic farming model) and community empowerment.

A team comprising geologists, hydro-geologists, environmentalists and agriculturists is working alongside the rural community leaders. Bringing a spiritual awakening in these communities to build youth and community leadership stands at the core of these efforts and is the key to the successful implementation so far.

In Karnataka, Kumudvati, Vedavati, North Pennar and Cauvery (tributaries) are being revitalised under the expertise of Dr Lingaraju Yale, the national project director for river rejuvenation, The Art of Living. In the three river basins of Vedavathi, Kumudawathi and Palar alone, 24,000 structures covering 6,314 sq km in 1,500 villages and 230 gram panchayats have been built which has benefited an estimated 2.5 million people.

The wells, which were dry for many years are now again filled with water and villagers have easier availability of water for drinking and farming. Overall, more than 5,000,000 people across 3,000 villages have benefitted from the river rejuvenation projects of The Art of Living.

“The government cannot be everywhere and the collective effort put by the Art of Living team has got us this wonderful result,” says Munesh Mudgil, Commissioner, Rural Development and Panchayat Raj, Karnataka government.

“So far three zillas, 50 villages and 500 gram panchayats have been benefitted by the Vedavati river rejuvenation project. The revolutionary work has changed the lives of people of this district, and job card holders have got work under the MNREGA scheme.”

In reviving rivers, the first step entails identifying the long-buried rivers of the past. With the help of modern technology such as remote sensing and satellite maps, experts plot the once flowing and thriving rivers deeply buried under silt. Factors like slope, drainage network, soil texture, land use, Geomorphology, lineaments, groundwater prospects, are studied and analysed.

The scope was eventually expanded to include ponds and wells. In addition to these geographic information system or GIS based thematic maps, long-term rainfall patterns are also analysed to approximately estimate the availability of surface water for groundwater recharge. This holistic understanding of the project area enables in the identification of the suitable locations for constructing artificial recharge structures.

After identification, the task involves empowering the local communities and inculcating a sense of ownership in them for the project.

Scientific studies reveal that deforestation is the cause for dry riverbeds and wells. Without tree roots to hold and store water, sediments are easily washed away by flowing rainwater leading to erosion and silting of river bed, flattening cavities that store water.

The Art of Living team has planted millions of trees of different varieties including banyan, peepal, tamarind, Indian gooseberry, jamun and neem along the rivers. Hardy and drought-resistant, these endemic trees need less water to grow.

Making water available has a direct financial outcome. Nagagowda, another farmer in Chikmagalur, is now growing betel leaves and vegetables. “I earn a profit of Rs 1.50 to 2.50 lakh. Earlier, I grew ragi and groundnut that fetched me Rs 20,000 to 30,000 only.”