Let’s Stop The RTE From ‘Doing An RTE’ On India 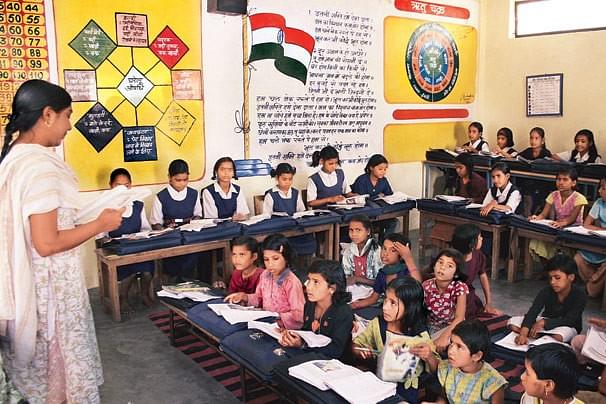 Students at a classroom in a government-run school.

There is no single word or phrase, at present, in the English language that can accurately describe such a behaviour or effect – wherein, the result yielded is the exact opposite of the one intended. But thanks to RTE (Right to Education Act), which is having a similar effect of destroying education instead of improving it, we might soon be able to describe all such contrarian effects with a simple phrase – “doing an RTE!” For instance, it may be fair to say that “the hair oil did an RTE on its user” to indicate that the hair oil caused hair fall instead of hair growth or that the “potency drug did an RTE on the patient”, to indicate that the potency drug increased impotency instead of curing it.

The present write up, seeks to capture the some of the dangerous implications of RTE and thereby justify the usage of the phrase “doing an RTE!”

The RTE Act was passed by Parliament in 2009 with the ‘intended’ objective of providing ‘free and compulsory education to all’ children between the age of six and 14. Let us evaluate how ‘successful’ RTE has been in achieving exactly the opposite. Let’s look at its impact on a few of the critical parameters:

1. Has RTE Succeeded In Providing “Free Education For All?”

The answer is a big no.

- At the time of enactment of RTE in 2009-10, around 5.73 crore children were studying in private schools but they were all left in the lurch, with RTE having nothing positive to offer them.

- A huge 13 crore plus children were studying in government schools but surprisingly, RTE offers nothing positive for them too.

So, if RTE totally ignores all the 19 crore (approximately) school-going children, who on earth does it seek to benefit?

- RTE seeks to benefit only a tiny fraction of these 19 crore students, based not on any ‘economic’ criteria, as is made out to be, but on the criteria of sheer luck (lottery conducted to give RTE admissions) or rampant corruption (rigging of RTE lottery).

- This tiny fraction of students, who are said to be benefitting from RTE is as tiny as 0.31 per cent or just 6.71 lakh students (for the year 2013-14). Sadly, even this number is found to be highly over estimated in several studies.

Another critical question to be asked is – what if most of the beneficiaries, who are now said to be getting the benefit of free education under RTE, would already have been getting the same benefit in government schools under the non-RTE regime?

2. Has RTE Improved The Condition Of The Nearly 12 Crore Students Studying In Government Schools?

The answer again is a resounding no.

- RTE gives the government a great excuse to not do anything significant for the government schools and dangle the carrot of RTE to anyone who complains.

- Telangana Chief Minister Chief Minister K Chandrashekar Rao has in fact cited the same reason, on the floor of the state assembly, for not implementing RTE in the state. He termed RTE as a “durmargamaina chattam” (a draconian act).

3. If The Government Wants To Shift More And More Children To Private Schools, Has It Enabled A Rapid Expansion Of Private Education Capacity?

The answer, yet again, is no.

Look at the table below, clearly showing the decreasing trend in the number of schools:

- While the number of government schools, as expected, continued to decrease, the rate of growth in private schools also registered a rapid decline from highs of 13.1 per cent in 2011 and 12 to just around 1.2 per cent in 2015 and 16.

Let’s look at it realistically – who in the right frame of his/her mind, would want to open a shop (read school) where 25 per cent of the goods (25 per cent seats reserved under RTE) have to be sold at a huge loss – that too in a market where this rule applies only to his/her shop (Hindu-run schools) and not to the shops of others (minority schools)?

4. Has RTE Succeeded In Educating More Children By Bringing More Of Them To Schools?

The answer, once again, is no.

This is the stark reality of RTE – it seems to have ‘successfully’ managed to reduce the number of school-going children. Look at the trend of enrollment in Classes I to V.

The population of India, for sure, has not declined. What then could have led to the reduction in the number of school-going children?

5. Has The Condition Of More Than 7 Crore Children Studying In Private Schools, Improved?

The simple answer is that – it has never been worse!

Ironically, while these 7 crore plus students are totally excluded from benefits of RTE, they are covertly included while sharing the costs of RTE.

- People have been falsely led to believe, by the government and by most prominent RTE activists, that the government reimburses, to the schools, the full amount of fees for the 25 per cent seats allotted under RTE.

- The fact is that the government reimburses only a fraction of this fees and not the full fee charged by the schools. Look at the amounts reimbursed in some states and compare them with the fees charged by private schools in these states:

- The amount of reimbursement varies from a low of Rs 5,400 in UP to a high of Rs 18,311 in Uttarakhand. Sadly, even these amounts are rarely paid on time and some never paid at all.

- Who is to foot the bill for the difference between the amount paid by the government and the actual fee charged by the schools? Who, for instance, is to pay the deficit of Rs 90,000 per RTE seat in a school, that may be charging 1 lakh as its fees but would be getting only Rs 10,000 per seat as the reimbursement?

- This deficit, unfortunately, is being paid by common folks – the worthless “unreserved” category – making their children study in private schools.

Hope that the deceit, sham and irony of it all sinks into the peoples’ minds – that the government, vide RTE, has fixed, for itself, an MRP (maximum retail price) on school fees when it ‘buys’ education from the private schools but refuses to similarly fix any MRP for private citizens when they buy the same education from the same set of schools.

6. Has RTE Succeeded, At The Very Least, In Improving The Overall Quality Of Education?

The answer to this too, unfortunately, is no.

Look at the trend of learning outcomes given in the ASER – Annual Survey of Education Report 2016:

Look at the data on the level of math that the students can do:

Just like in basic reading, a drastic drop can also be seen in the number of students who can do basic division – all thanks to this great panacea for all education ills of India – RTE!

Thus, the summary of this remarkable legislation called RTE, is that:

1. It will never ever succeed in achieving its stated goal of providing ‘free and compulsory education for all’ because it is just not designed to do so.

2. It completely neglects the nearly 10 crore students studying in government schools and provides the government a great excuse to not do anything much for them.

4. It seeks to give the benefit of ‘free education’ to around five to 10 lakh students (most of whom might already have been getting free education in government schools) by making nearly 19 crore other students suffer.

5. Even these five to 10 lakh students don’t really benefit because of the drastic drop in the quality of learning and education of all students.

6. It has, additionally, made education so unaffordable for more than 8 crore students studying in private schools that the school fee has now become a top means of birth control and is even leading to suicides of parents and students. (Read for more details)

With ‘achievements’ as great as the ones listed above, what other than destroying India and its education, can we say, is the objective of RTE?

One can only hope and pray that all the learned souls of India – in the media, in the think-tanks and in the government – see through this charade of RTE and immediately stop RTE from “doing an RTE” on India.