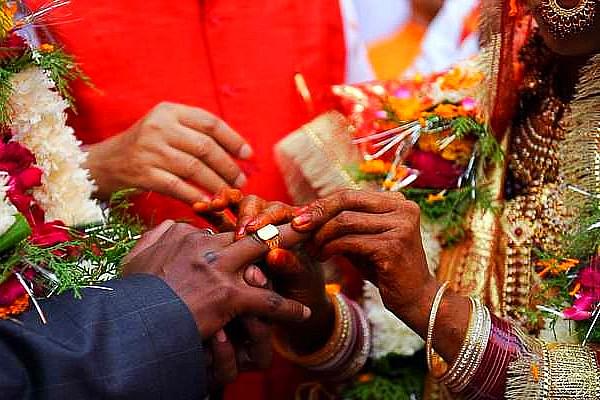 A marriage in India. (Burhaan Kinu/Hindustan Times via GettyImages)

When a trial court in Tirupur awarded death sentence to six people in a case of 'honour' killing, it seemed like justice has finally been delivered to the victim – a youth from Scheduled Caste (SC) who married a girl belonging to the Thevar (OBC) community. Among those who received death sentence was the father of the girl. It is too early to celebrate this as a victory for social justice. From the trial court the judgement will now have to receive a mandatory confirmation by the Madras High Court. It will be only then one can be sure that the justice has been done to the victim of this dishonourable 'honour' killing.

Tamil Nadu has been seeing such horrid instances of inter-caste rivalry and ‘honour’ killings – particularly when the man belongs to the SC community. In 2013, the body of Illavarasan, an SC boy, who had married a Vanniyar girl was found on the railway tracks. Earlier, after the marriage took place, the father of the girl had committed suicide, which led to mobs ransacking SC households.

There are many more such incidents. The reason is not far to seek. Those behind the so-called social justice movements in Tamil Nadu are more interested in deriving a perverted pleasure in blaming all caste problems on one single community – Brahmins. The dominant land holding castes, rather misleadingly referred to as other backward class (OBC), whose conflict with SCs constitute the vast majority of caste-related violence, are mostly let off the hook.

While violently positing themselves against the SC, the land-owning castes and those who style themselves as erstwhile ruling castes, blame the Brahmin community as the reason for their downfall. The elusive 'Brahminism' becomes the villain and the real perpetrators of atrocities can always hold 'Brahminism' as the reason and escape any responsibility.

This was a tactic perfected by none other than E V Ramasamy (EVR), the original Dravidian demagogue when he blamed every one from Gandhi to Manu to Communists, except the perpetrators, for burning to death SC landless labourers including women and children at Keezhvenmani. That was in 1968. Since then whenever there had been killing of SC people, either because they dared to defy the political authority of the dominant castes or defy the ultimate barrier of marriage, both the politicians and the media blamed it on ‘caste Hindus’ and in majority of the cases even refrained from mentioning the castes explicitly.

During Illavarasan-Divya marriage and subsequent problems, the Paatali Makkal Katchi (PMK) leader Dr S Ramdoss ridiculed the love between SC and non-SC partners as ‘drama-love’. His cadre mostly Vanniyars picked it up. Soon a lot of rumours and urban legends started to flood the social space creating an extremely volatile situation. ‘Kaduvetti’ Guru, one of the lieutenants of Dr Ramdoss, gave provocative speeches in which he stated that their readiness for social harmony with the Dalits does not include SC boys trying to marry their girls.

The so-called Dalit leaders also do not help much to improve the situation. Viduthalai Chiruthaigal Katchi (VCK) leader Thirumavalavan in a speech that went viral said the inter-caste marriage of non-SC girls with SC boys is “proof" that the "men of these castes (read OBC) are good for nothing". "Your own women reject you and you should be ashamed,” he said to the thunderous applause of his party workers. He pointed out how in his own community the parents of girls who go away with their lovers, simply do the ‘last rites’ for the girl symbolically and sever all connections with her. “On the other hand these shameless castes call their girls back even after they had eloped with our boys and lived with them,” he says.

In other words, the love marriages which have great potential to bring two communities together have become symbols of patriarchal conquest of women of the other castes.

The judgement has definitely made the ‘Dalit’ organisations happy. And a punishment of this sort is welcome because the dishonourable ‘honour’ killings have to be stopped. Along with this, the mindset of the people too need to be changed. What the state needs is the healthy departure from the caste-politics discourse, which centres around women as the prized possession of the community. The communities need to come together and evolve strategies to counsel youths and more importantly their parents so that the love marriages become vehicles of inter-community dialogue and creation of bridges of goodwill rather than sparks of war.

Most of the SC-non-SC love marriages are done by educated youths mostly against the wishes of their parents and communities. So naturally they have to face hardships. The usual emotional support a couple gets when they are newly married from their parents and in-laws which usually buffer the period of initial adjustment is absent for them. So the initial hard period is also utilised by the vested caste interests to break the marriages, often resulting in the complete destruction of the people involved if not physically, but surely, psychologically.

In this situation, the announcement by the Narendra Modi government in increasing assistance to inter-caste marriages involving a SC partner is a welcome move. It will definitely help the young couple face life with more determination. Along with this financial assistance, the government should also educate people, particularly the parents, that inter-caste marriages are not only inevitable but also healthy for building social harmony. There is no community based winner or loser here, but all communities are winners and they advance the cause of humanism when they endorse and make an inter-caste marriage a success.