Modi Government Has Not Done Much To Correct Civilisational Issues 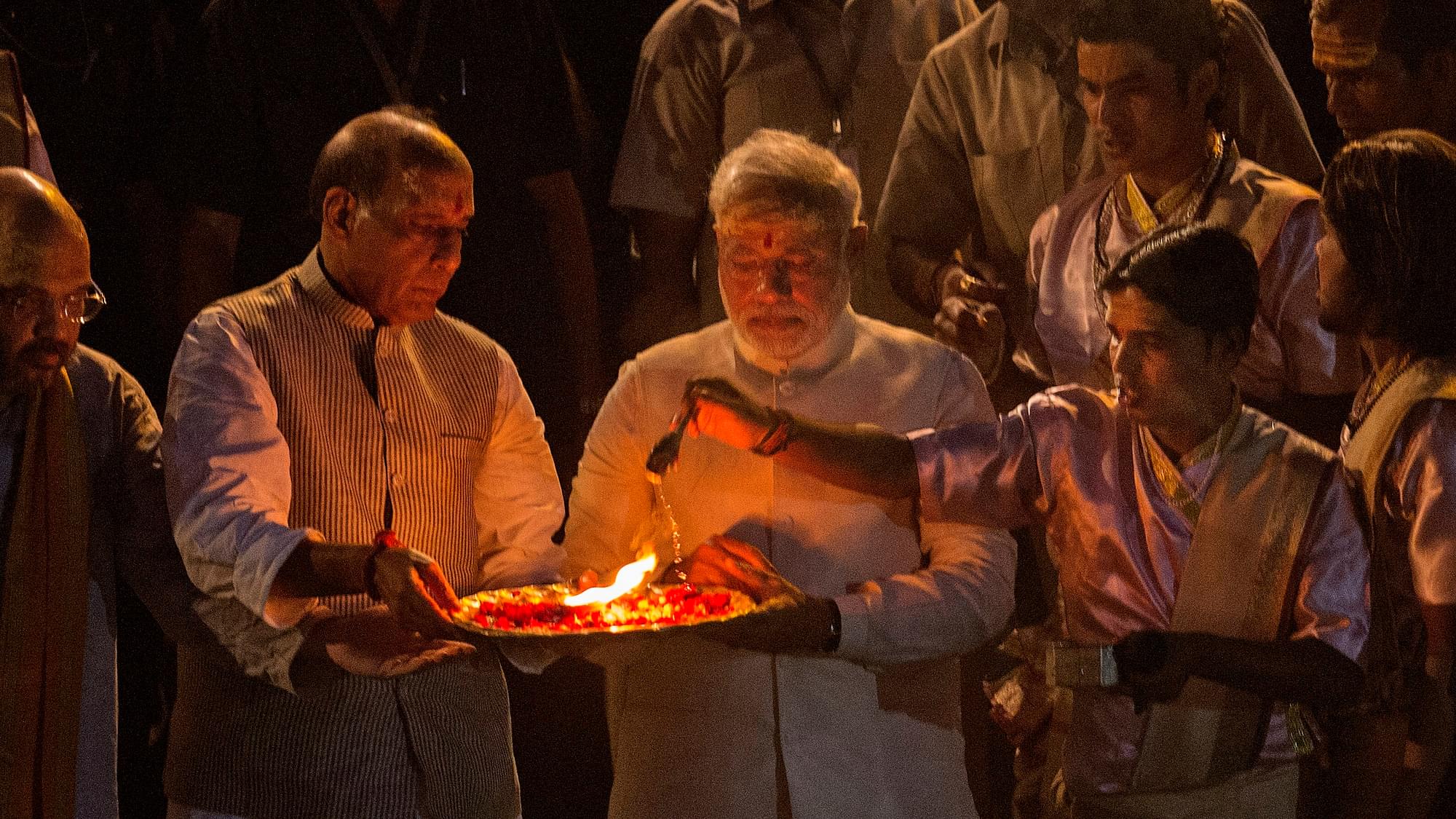 Report cards on Narendra Modi’s two-year-old government are all over the place. But, hardly anyone has looked at its performance on civilisational issues. True, there has been some sniping from usual suspects on so-called incidents of intolerance, but these have nothing to do with government actions or policies.

Enclosed is my list of critical civilisational issues for the government to address. Most of these are not issues that BJP had on its manifesto. Hence, some would say it is unfair to judge it on this criterion. However, this is a party that claims in its manifesto “(civilisational) roots provide sustenance to its people” and the need to pick up the civilisational threads.The BJP 2014 Manifesto stated:

What is needed is to take lessons from history, recognise the vitality and resilience of India, the power of its world-view and utilize its strength, which drove it to glorious heights and analyse its weaknesses, which led to this abysmal fall. Pick up the thread from the point where the continuum of our civilisational consciousness was lost and reorient the polity in consonance with those strong points of Indian psyche which will be the engine for our future glory.

For such a grand goal, the manifesto itself is sparse on how to get there. So I’ve put forward my own list of issues that are minimally necessary for civilisational aims:

One of the legacies of partition and the constitutional debate that followed was the insertion of articles that safeguarded the rights of religious minorities. This is natural; rights of minorities should indeed by safeguarded. What this means in a secular state is that minorities would have same rights as that of the majority, without discrimination.

However, through successive interpretation and consistent encroachment by the state on the private domain, this right became one where religious minorities in India came to enjoy special rights, the right to non-interference by the state, that the so-called majority did not. The constitution became communal. The RTE act, with its draconian interference in the private domain, made this situation worse.

As a result Hindus, and only Hindus, don’t enjoy the right in India to run their own educational institutes without interference. Besides cutting the civilisational roots, this provision also leads to cutting of branches.

Since being declared a minority became the only way to safeguard rights, it created a centrifugal force with more and more groups wanted to be “declared non-Hindu.” Sikhs groups called it discriminatory to be clubbed with Hindus, and even the Ramakrishna Mission tried to declare itself non-Hindu to preserve its independence.

State discrimination based on religion on the right to run educational institutions would be completely illegal in a secular state such as the US, which India claims to be. Indeed even now, many European countries, such as Germany, continue to favour the majority religions and collect taxes to pay (majority) Christian Churches.

The BJP has often labeled Congress’ practices as “pseudo-secularism” but dismantling this religious discrimination forms no part of its charter. The BJP could argue that it does not have the requisite numbers to make changes; it should ponder how the UPA managed to pass the RTE act, with BJP support.

There was a time when India was the top of the education world, when Chinese travellers like Hiuen Tsang spent years gathering its knowledge riches. We need to decontrol and end educational discrimination to restore our place.

Article 26 of the Constitution allows every religious denomination to manage its own affairs in the matter of religion. However, here too the state intervened by taking over major Hindu temples.

The government confiscates the donations that Hindus make to their temples. In effect it’s a Hindu tax, a neo-jaziya. To add salt to the wound, state governments fund the repairs of Churches and other religious places through these funds.

Again, this interference, state discrimination, and state funding of “minority religions” would all be illegal under the US constitution. No tradition can flourish if its own government doesn’t allow control of its institutions. Temples are the center of Hindu cultural life and traditions. They must be restored to the community.Modern systems can be setup for community-based controls of the temples.

India faces a multi-billion dollar conversion war that seeks to erase its traditions. Tehelka documented how the Joshua project, a sophisticated operation had been setup to target India for conversion.

...a large-scale intelligence operation that brought together American strategists, theologians, missionary specialists, demographers, technologists, sociologists, anthropologists and researchers to create the most comprehensive people group profiles in the 10/40 window…

This conversion war is asymmetric in nature. While Baptists sent mission upon mission to convert Nagas, no Nagas would convert the Baptists. The asymmetry manifests in religious doctrine, in intent, and in funding. It is not a level-playing field and the state must step up to protect is indigenous cultures.

The human rights regime that enables the conversion war is also asymmetrical and must be contested. As African scholar Makau Mutua pleads:

The rights corpus not only forcibly imposes on African religions the obligation to compete—a task for which as non-proselytizing, noncompetitive creeds they are not historically fashioned—but also protects the evangelizing religions in their march towards universalization … it seems inconceivable that the human rights regime would have intended to protect the right of certain religions to destroy others.

The BJP government has done some generic work on sending notices to NGOs who were in violation of FCRA laws, but is otherwise oblivious to this issue.

I also hear from the grapevine the BJP is kowtowing to the Vatican faction of the Catholic Church and ignoring clergy and laity groups that want more local accountability and control. The Church manufactures local saints to aid in conversion. The PM’s proposed Vatican visit for Mother Teresa’s sainthood can hardly help.

As I set out in my book “The English Medium Myth”, no major country has become developed on the basis of a foreign language. Of the 20 top countries in GDP per capita, each of them has science, technology, medicine, business and law in the languages spoken by the masses. Of these only four are English-based. Yet the entire higher education and professional setup in India is English-medium. This discrimination extends to law courts where most Indians cannot even plead in their own languages in state High Courts, let alone the Supreme Court.

This English apartheid is a huge barrier to development for the majority of people in the country. Every child should be able to study to the highest level in their own mother tongue. I have set out a clear policy proposal for this. This is the only way to have Skill India, or Digital India work for the masses. Enabling Indian language ecosystem will catapult our economic development and civilisational rejuvenation.

I have put this on the list because they form part of BJP’s manifesto. However, though they have emotional and symbolic value, they are unlikely to make a major difference in terms of civilisational trajectory. As far as I can tell, nothing has been done on the Ram Temple issue and Ram Setu is in abeyance.

The government is too apologetic to charges of ‘saffronisation’. Those who either have little civilisational appreciation, or would even like to see it completely erased, use the charge to stymie change. Don’t fall for it.

The government should unapologetically saffronise. Contrast with the actions of the UPA or the Communists in power. They steam-rolled on with their agendas, denigrated our civilisational roots and produced extremely toxic textbook material that whitewash all other crimes but those of despicable Hindus. Some of this was tracked in SM with the Twitter tag #SaveOurChildren.

The UPA and communists also stuffed institutions with their ideological cronies, some of this within months of coming to power. BJP has been lackadaisical in this regard. We must not suffer from the Prithiviraj Chauhan syndrome of letting go with the upper hand.

There are other initiatives of the government that are civilisationally relevant. Ganga Rejuvenation has a capable minister in charge, Yoga Day has also been a successful initiative of the government though it seems too willing to water it down and “secularize” it rather than stick to the authentic tradition. The setting up of the Ayush ministry is also a good step, though I view the Ayush ministry’s collaboration with WHO for certification a complete disaster. India should retain certifying authority internationally, as China does for Chinese medicine and Japan for many martial arts. Further, within India, it is important that certification does not kill the traditional ecosystem of Ayurvedic and natural practices.

The government has made economic growth a priority. Indeed, its biggest action has been its steps to clean up governance. The feedback I hear from the business community is that, for the first time, there is a policy-driven and business-friendly government, where you do not have to give bribes to get things done. This is commendable.

However, as the government is heads-down on economics, it has taken the view that growth will solve all problems, including that of the conversion war. I believe this view is naïve, and not based on a comprehensive study of the issues and the resources deployed against small communities. The conversation must start today.

It would be too much to expect the government to tackle all these issues in two years that it has been in power. However, in most cases, it hasn’t even understood the problem or even started a dialogue towards a solution. Often it has taken steps in the exact opposite direction. Overall, its civilisational grade is barely a D. Is it assuming it will work on civilisational issues in its second term? That would be a mistake it’s made before. Can we expect any real action from it in the remaining time?