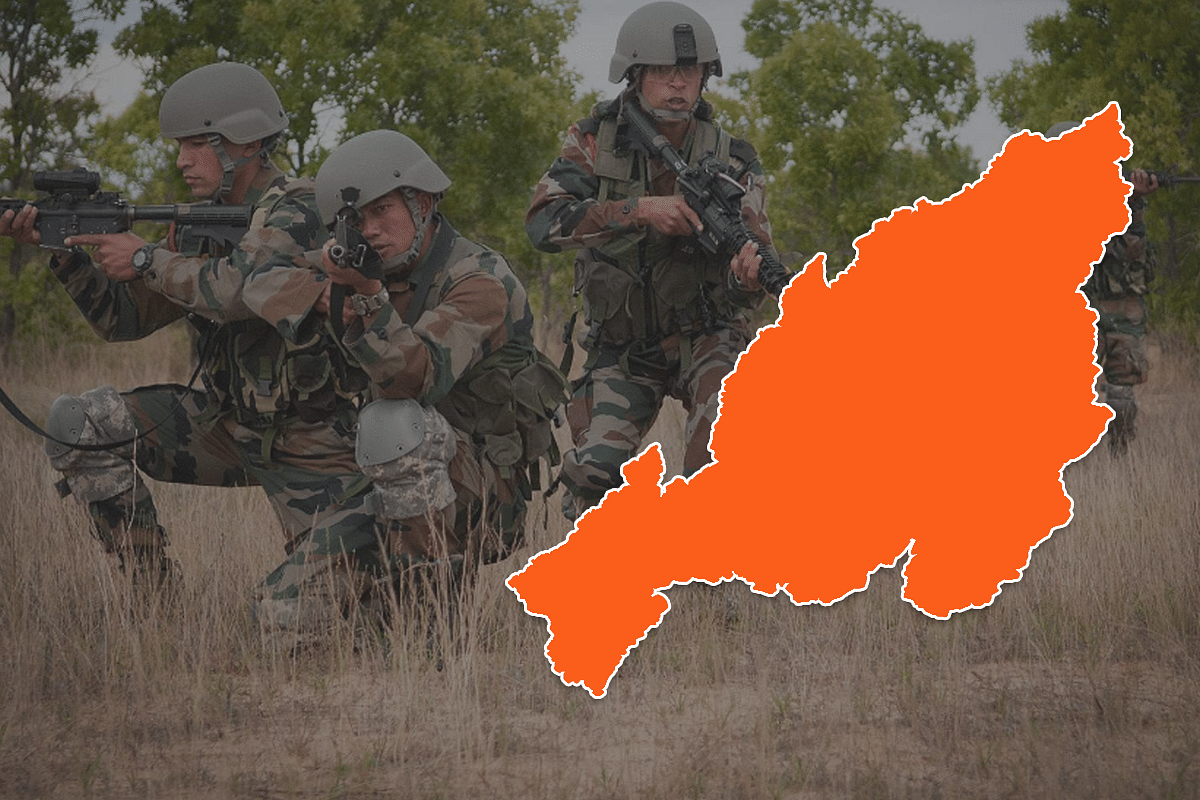 There cannot be any doubt that the army’s special forces officer who ordered the men under him to fire on a pickup truck carrying a group of coal miners returning to their homes in Oting village of Mon district in western Nagaland bordering Myanmar on Saturday evening has to be cashiered.

There was another attack by enraged locals on another Assam Rifles camp in Mon town (the headquarters of the district) on Sunday morning resulting in troops opening fire once again and killing yet another civilian. The death toll, so far, is 15 (including one Assam Rifles soldier).

It is not only that particular officer’s head that should roll, and roll immediately. The heads of his immediate superiors, including the commanding officer of the 21st Para (SF) unit the offending officer was posted in, have to roll.

The man commanding the army’s 3 Corps based at Rangapahar near Dimapur (Nagaland) — its GOC, Lt Gen J P Mathew — should be asked to take responsibility for this unforgivable, and completely unacceptable, lapse that led to what was nothing short of a horrific massacre.

What Could Have Gone Wrong

A statement issued by the army’s 3 Corps (which is headquartered at Rangapahar near Nagaland’s commercial capital Dimapur) read: “Based on credible intelligence of likely movement of insurgents, a specific operation was planned to be conducted in the area of Tiru, Mon District, Nagaland. The incident and its aftermath are deeply regretted. The cause of the unfortunate loss of lives is being investigated at the highest level and appropriate action will be taken as per the course of law”.

The operative part of this statement was that there was “credible intelligence of likely movement of insurgents” between Oting and Tiru villages (a distance of about 20 kilometres). The Yung Aung faction of the Naga insurgent group NSCN(K) operates in that area.

Based on that ‘credible intelligence’, the SF team laid out an ambush and when the pickup truck approached, the officer commanding the team ordered it to open fire, thus killing six and injuring others.

Even a cursory examination of this version would throw up glaring violations of SOPs and an unpardonable lack of judgement on the part of the officer.

It can be assumed that the army received an intelligence input that militants would be travelling on that road in a pickup truck. That is why, presumably, the troops laid the ambush.

But such intelligence, by no stretch of imagination, can be labelled as ‘credible’. Militants don’t move around in pickup trucks, definitely not a bunch of them. And more so in an area that has a sizable presence of security forces.

Militants would always move on foot and keep off the roads. And they always move in ones and twos.

But even if one assumes that the militants disregarded their own SOP and a dozen-odd of them got into the back of a pickup truck, did the SF ambush team have to open unprovoked fire on them?

According to survivors’ accounts, corroborated by some locals, the group of miners travelling in the pickup truck was merrily singing songs. That in itself should have alerted the SF ambush party because militants never sing songs while travelling.

The SOP — considered inviolable — in such operations clearly states a vehicle suspected to be carrying militants or contraband should be first immobilised. There are many easy ways of doing so — laying improvised spikes to puncture tyres is one commonly used tactic.

The ambush party, if nothing else, could have shot at the tyres of the pickup truck. Only, and only, if the passengers in a vehicle fire at the security forces can the latter retaliate. And then, too, every effort has to be made to capture the militants alive by shooting at them below the waist. After all, a militant who is captured alive is much more precious than one who is dead.

But the SF team did not, ostensibly, make any effort to immobilise the pickup truck and when it came within range, the troops opened fire on the occupants of the vehicle. That was completely unjustified and unpardonable.

The officer who ordered the men under him to open fire deserves no mercy and has to be prosecuted for murder. If the jawans opened fire on their own — a highly unlikely scenario because they were not fired upon by the unarmed miners — then they also should faced murder charges.

The officer’s, or the soldiers’, conduct is inexplicable. The only explanation is that the men in uniform may have felt trigger-happy and thought they could get away with murder.

Only the court of inquiry ordered by the GOC, 3 Corps, and the Special Investigation Team (SIT) formed by the state government will establish the exact sequence of events. But on the face of it, the SF team stands guilty of an indefensible and reprehensible violation of SOPs.

This is the second time in exactly three weeks that violation of SOP by the security forces in the North East has had tragic consequences.

On November 13, similar disregard for SOPs led to the killings of the Commanding Officer of the Assam Rifles’ 46th Battalion, Colonel Viplav Tripathi, his wife and five-year-old son, and four other soldiers in Manipur’s Churachandpur district.

Colonel Tripathi and his family had gone to a village near the India-Myanmar border and were returning when the convoy he was travelling in was ambushed. The SOP is to send a road opening party (ROP) to sanitise a route a senior officer will be taking.

That ambush was also considered to be the result of a major intelligence failure of the force. Incidentally, one of the jawans who was killed in the Manipur ambush — Khatnei Konyak — hailed from Tizit village that is barely 12 km away from Oting village where the miners killed on Saturday evening hailed from.

Another major failure on the part of the army was its inaction after the so-called ambush that resulted in the deaths of seven miners.

Senior army officers based in Nagaland should have foreseen that residents of Oting would get furious and attack the Assam Rifles camp located there. Immediately after getting the news of the botched ‘ambush’, reinforcements ought to have been rushed to Oting.

The police and civil administration, as well as the state’s political leadership, should have been informed immediately and asked to help defuse the anger that would inevitably be triggered by the massacre.

The army should have immediately got in touch with local political leaders as well as the influential church leaders and taken their help to control the fallout of the botched ‘ambush’. All that could have prevented the subsequent deaths of seven more civilians and one jawan on Saturday night and Sunday. But nothing was done and it appeared that the army was paralysed into inaction.

Why Heads Must Roll NOW

This completely unacceptable and unpardonable massacre of innocent civilians has, understandably, triggered outrage across Nagaland. People of the state, and the entire North East, are angry.

The massacre has negated decades of painstaking good work done for local communities by Assam Rifles and army units stationed across the region. The force’s ‘civic action programmes’ (read this, this and this) had been well received by and had benefited local communities, and also helped build good ties between security forces and the local people.

All that is now threatened by last weekend’s horrific incidents. There is the imminent risk of Nagaland, which is now experiencing fragile peace after many decades of bruising insurgency, slipping back to its earlier ‘disturbed’ status.

The massacre can imperil the protracted and delicate negotiations between the NSCN(I-M) and the Union government with the former hardening its stance and demanding the lifting of the Armed Forces (Special Powers) Act.

This massacre can also drive a number of angry young men and women into the ranks of the insurgents. The entire region is backward and desperately poor, and that results in many frustrated men and women joining the insurgent groups.

If anger against the army, and by extension the Indian state, is added to this mix of poverty, unemployment and backwardness, the insurgent groups will find it very easy to recruit more men and women into their ranks. And that can not only destabilise Nagaland, but the entire North East.

That is why it is necessary to immediately assuage the anger and hurt sentiments of the Nagas. The best way to do so is to take stern action against those responsible for the massacre.

Simply assuring that the incident is “being investigated at the highest level” and that “appropriate action will be taken as per the course of the law” is not enough. And this statement is being construed by the people of Nagaland as indication of a likely cover-up.

The outrage in Nagaland will not be mitigated if heads do not roll right away. The army and the Union government need to tell the angry and hurt people of Nagaland that the officer and men responsible for the incident and their superiors have been removed from their posts.

If civil and police officers can be suspended following even minor incidents to assuage public anger and pending detailed investigations, there is no reason why the SF men and officers should be spared similar action.

Also, the GOC, 3 Corps, needs to issue a very sincere apology right away. His silence on the tragic incident has been deafening and has not gone down well with the people of the region.

He has to come out and own responsibility for the terrible mistake that officers and men of the force he commands made. Lieutenant General Mathew has been found wanting in displaying this ‘officer-like’ quality. That is also unacceptable.

Perhaps even the Prime Minister ought to issue a statement and reach out to the anguished citizenry of Nagaland.