Nutrition, Gender And Height: Why Indian Children Are Short 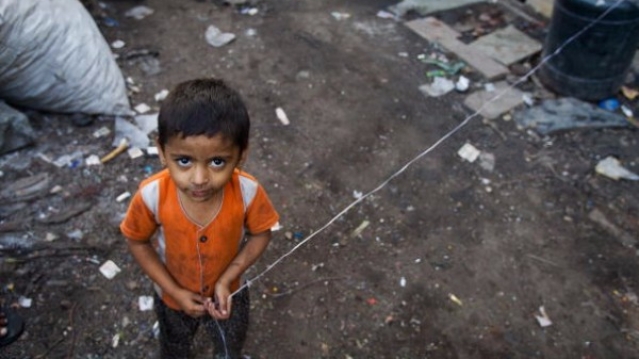 A young girl looks upwards as she plays with a piece of string in Mumbai. (Daniel Berehulak/Getty Images)

There’s often talk about how over the last 50 years the Japanese and Koreans have grown taller on average. But have you noticed how short Indian children are? Or, how first-born children tend to be smarter than their younger siblings?

A couple of data-happy economists, Seema Jayachandran and Rohin Pande, have studied just that. Their findings were published a couple of years ago in a paper titled ‘Why Are Indian Children So Short?’ They say the preference for sons ensures that the gradient from the first to the last child is steeper than in other comparable regions of the world.

In most of the developed world, economic growth has been associated with an increase in the height of the population. This trend, however, has failed to establish itself in India and Africa, the two regions under consideration in the study. The paper finds that between 1992 and 2005, India’s economic growth was higher than 6 per cent per year – resulting in a higher per capita GDP than over 100 countries; yet the rate of stunting among children in India in 2005 was a shocking 40 per cent, the fifth-highest rate in the world.

According to the paper, this could in large part be due to the preference for sons, the desire for that son to be healthy, and the consequent inequity in resources allocated between the eldest son and the subsequent siblings, whether boy or girl. If a family’s first-born child is a son, then the family will spend a large proportion of their resources in keeping that child healthy and well-fed, and will naturally have fewer resources for the subsequent children. This follows the hypothesis that first-borns are taller and healthier.

However, the stark preference for a boy over a girl has an interesting – if unfortunate – effect on this trend. If a family expects to have two children and the first happens to be a girl, then the paper hypothesises that the parents will allocate fewer resources to the girl in the hope that the next child will be a son. They also tend to conserve their resources because they feel that, with the first child being a girl, it is increasingly unlikely that their desire for a son will be fulfilled within their target of two children.

Now, if the second child is also a girl, then she receives even fewer resources because not only is she not the eldest, but now the family will have to try for three children in order to have a son. And once the son is born, he is showered with all the resources the parents can afford to spend as he is considered an asset, while the girls are viewed as a drain on the resources.

The paper states, optimistically, that “one might expect unequal allocation in the household to matter less as India develops”, but then goes on to find that when households are compared by wealth, the birth order gradient is actually relatively large among wealthier households.

“Thus, India appears to still be far from the level of wealth at which, despite unequal allocation, children are all sufficiently nourished.

“This implies that even as India develops, the problem of malnutrition might be slow to fade, unless policies are put in place that influence or counteract the intra-household allocation decisions that parents are making,” the paper says, which is a sad commentary on the current state of India.

Quite apart from the differences in allocation of food within households, about which Amartya Sen had written in 1983, India faces a much larger problem of malnutrition. The average IQ (intelligence quotient) in India is now below 90, which is a significant challenge for developing a properly skilled workforce.

It is not clear if there is enough awareness of the problem that this creates because the dependency ratio will increase not only because of demography but also intelligence. There is an urgent need to address this problem by ensuring enough supply of protein to children between the ages of one and 10. Just a glass of milk and a banana or an egg every day will do. Perhaps this should be made a compulsory element of corporate social responsibility. Agencies like Akshay Patra can be entrusted with the task.