One Guru, One School At A Time; The Story Of Ekal Vidyalayas 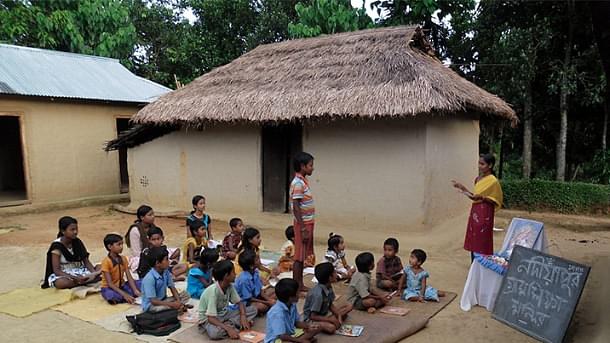 Ekal Abhiyan, a movement to take education to the poorest of the poor, and to penetrate into the remotest villages of the rural and vanvasi India. (Ajaey Sharma)

In his letter, dated 20 June 1894, to Haridas Viharidas Desai – the famous diwan of Junagadh, Swami Vivekananda wrote about his life’s mission and the primary purpose of his visit to America.

He wrote, “primarily my coming has been to raise funds for an enterprise of my own.”

“Now lecturing for a year in this country, I could not succeed at all (of course, I have no wants for myself) in my plan for raising some funds for setting up my work,” he wrote further.

What was his plan? What enterprise was Vivekananda talking about?

He explained this in the letter itself:

The higher classes in India and America are the same, but the distance is infinite between the lower classes of the two countries… A nation of 300 million has the smallest field of recruiting its great ones compared with nations of thirty, forty, or sixty millions, because the number of educated men and women in those nations is so great… Educate and raise the masses, and thus alone a nation is possible. (emphasis added)

About his plan to achieve the above, he wrote:

“If the poor cannot come to education, education must reach them at the plough, in the factory, everywhere. How? You have seen my brethren. Now I can get hundreds of such, all over India, unselfish, good, and educated. Let these men go from village to village bringing not only religion to the door of everyone but also education.” (emphasis added)

Swami Vivekananda wrote a similar letter to the Maharaja of Mysore on 23 June 1894.

[..].This requires an organisation, which again means money. Men enough there are in India to work out this plan, but alas! they have no money. It is very difficult to set a wheel in motion; but when once set, it goes on with increasing velocity.

From the letters, it is clear that Vivekananda dreamed of an organised effort to take education to the poor children living in the villages and forests of our country. His visit to America was an effort to mobilise funds for such an organisation. He wrote in his letters that he didn’t succeed in this: neither in America nor in India.

...some heroic soul would arise some time or other in India, far abler than myself, and carry it out.

Years later, after his death in 1902, his words came true. A movement was started to take education to the poorest of the poor, and to penetrate into the remotest villages of the rural and vanvasi India. It was named ‘Ekal Abhiyan’ after its famous ‘one-teacher schools’ (OTS) or ‘single-teacher schools’, or ‘Ekal Vidyalayas’.

The concept is to provide holistic education to the children hailing from rural and forest villages by a well-trained teacher (preferably a young woman of the same village). The curriculum includes not only basic literacy, arithmetic, science and languages but also includes topics on health and hygiene, physical activities and yoga and introduction to local skills. The content has been developed in a very organic way and is taught in the local language using local stories of the region. With more than 50,000 Ekal Vidyalayas at present, it is the most unique and largest organisation working in the villages of India.

Ekal is run by thousands of selfless and motivated volunteers, just as Vivekananda had once dreamed of, and is a silent revolution changing the face of Indian villages.

Ekal’s journey has been a remarkable story. In the early 1980s, some social dreamers started experimenting with ‘single-teacher schools’ in the vanvasi villages of Gumla district (presently in Jharkhand). The group included Dr Rakesh Kumar Popli, Dr Rajneesh Arora, Dr Mahesh Sharma and Ashok Bhagat. Something interesting was going on in parallel in the district of Fulbani, Odisha. Shyam Gupta, a social activist working with the vanvasi communities, was able to establish 400 night schools. These schools would teach adults and children who worked in the fields in the daytime.

The experience from Gumla and Fulbani ultimately helped to evolve the concept and model of Ekal Vidyalayas. Formally, the concept was conceived in Gumla in June 1986 in a seminar organised to find out the solution to the problem of illiteracy in tribal villages. Models from Jharkhand and Orissa were discussed and seen as a way forward. Bhau Rao Devras, a renowned social activist, had outlined the concept of the one-teacher school. Dr Popli helped in refining the concept and wrote the book Khele Kude Nache Gaye about the non-formal method of teaching.

Since its inception, Ekal has put efforts to imbibe in its models the philosophy of local participation. One can see this; for instance, a new vidyalaya can only be started if there is a demand for it from the local people of the village. A village committee is formed which forwards a demand for a vidyalaya in their village. Ekal initiates its processes only after receiving such a demand.

Localised curriculum is another example of this practice. Continuous training of acharyas (teachers) is one of the most important aspects of Ekal’s eco-system. Ekal has evolved its methodologies to work and manage activities on such a huge scale. These models can easily inspire students of organisational behaviour. Thousands of Ekal volunteers and acharyas are engaged in achieving something incredible that others can only dream of.

The whole Ekal Movement is a volunteer-driven model. In its journey of more than two decades, Ekal hasn’t taken any help from the government. With its highly cost effective and transparent model, Ekal has built its own pool of supporters. Ekal’s expenditure on administrative activities is approximately 9 per cent only. Ekal does not build or purchase any buildings; the vidyalayas are run in panchayat buildings or in volunteers’ homes. If nothing is available, Vidyalaya is run under a tree.

This commitment to educate the unreached children of the remote villages has inspired innovative and creative support programmes like ‘$1 a day’ where a person donates $365 per year to Ekal which is sufficient to run one Ekal Vidyalaya. The idea of such volunteering based approach is to make society more conscious about the challenge our nation and society face. Recently, in one of the programmes, Prime Minister Narendra Modi pitched the idea of having 100,000 Ekal Vidyalayas by 2022. Ekal volunteers have taken this as a challenge and have started putting efforts to mobilise resources.

In recent years, Ekal has also started working on the next stages of the movement i.e. economic empowerment and better healthcare for rural and vanvasi brothers and sisters. Ekal Gramothan Foundation and Arogya Foundation of India are two initiatives launched under the umbrella body of Ekal Abhiyan. Resource-cum-training centres called GRCs (Gramothan Resource Centres) are being established in the heart of remote regions of our country. These centres provide training, resources and handholding to the village microentrepreneurs.

Innovative solutions such as mobile skilling centres being launched to take skills and training to the remotest villages. Organic nutrition gardens called Poshan Vatikas are being established on a massive scale. Unreached children from the remotest villages are touching computers for the first time. All these initiatives are a result of Ekal’s commitment to strengthen the poorest of the poor and to reach the remotest villages. Ekal Movement is all about putting people at the centre of the development. It is an organic bottom up movement. Ekal is a faceless movement with thousands of faces and a people’s movement in a true sense.