Open Defecation-Free Life: What This Can Really Mean To A Village And Its Women 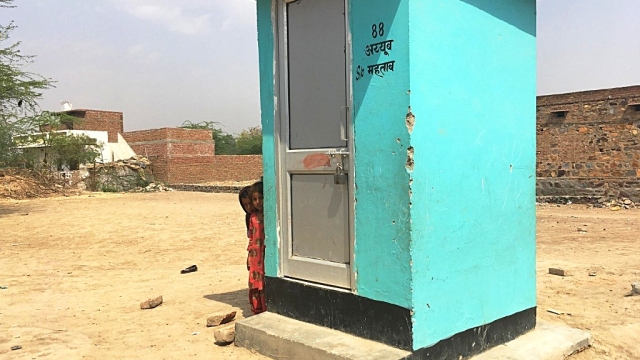 A magical structure with walls and door that has changed lives.

Before her house got a toilet last year, this was the morning routine Shabnam followed for 21 years: she would be up by 4am, "before azaan". She would throw a dupatta around her shoulders, fill a lota with water and step quietly out of the house. Within minutes, neighbouring girls would join her. Except on days when they didn't turn up, Shabnam would walk towards the field and squat in a corner for her morning ablutions. It would still be dark by the time she returned. She would go lie in the bed again, until her day officially began about an hour later.

But it went this smooth only on lucky days. On others, she would encounter water snakes or wade through muck thanks to rains. Sometimes, she would spot a man lurking around. She would hurriedly get up and march towards her house, a brisk walk of about 500 metres.

Did she ever dream of a life without this arduous ritual, when she could sleep until she wanted and didn't have to put her life and honour at stake every morning? She didn't. Shabnam had known no other way. The ritual was a part of her existence that she couldn't stop or even tweak. Like menstruation. Which added its own set of miseries every month.

Imagine her surprise last year when she saw toilets at homes for the first time. Those magical structures with walls and door where nobody could invade her privacy, and that too within the safety of her house. That's also when she first discovered soap. She took an instant liking to it. Its use washed away the stink and made her hands "smell like flowers".

It's not like Shabnam's village Marora in Haryana's most backward district Mewat, located some 50 kilometres away from New Delhi, did not have any toilets. But seven years ago, when she shifted out of the village after marriage, most didn't. At least she never used any. Her marriage took her from one toiletless village to another. But over the last year, her visits to her now toilet-equipped maiden home has changed her. She is revolting. She has just told her husband in neigbouring Rajasthan that she wouldn't return until they too get a similar toilet constructed in their house.

Not just Shabnam's, life of all residents of this tiny village of about 150 families has undergone a sea change with the addition of toilets. It has been massive and sudden. Two-third of all families got a toilet only in November when Sulabh International made 95 of them. Today, every house has a functional toilet, says Monika Jain, vice-president (rural) of the social organisation that adopted this village.

Marora is now an open defecation-free (ODF) village. The government defines ODF areas as ones where there is no faecal-oral transmission, that is, no visible faeces and every household and public institution is using 'safe technology option' for disposal of faeces. Technically speaking, 'safe technology option' is one where there is no contamination of surface soil, ground water or surface water, excreta inaccessible to flies or animals, no handling of fresh excreta, and freedom from odour and unsightly condition.

A walk in the village didn't throw up repelling sights of faeces. Mukesh Kumar, the village lambardar (an honourary post) testifies that residents don't go to fields to relieve themselves anymore. As someone who owns large tracks of agricultural land, he can't be happier.

It was always annoying to spot squatters in his field, he says. "I hated beginning my day with the stink they left. I had to always watch out against stepping on shit. All this is thankfully a thing of the past now. Some people still come to fields out of habit. But I can say it has almost stopped. It's reduced to, say, five per cent,” he says.

To ensure proper disposal of excreta, the Sulabh toilets are made with twin-pit technology that doesn't need a sewerage line and use only one litre of water for flushing. The excreta is collected in an underground pit to be composted into manure, said Purushottam Sharma, project officer with Sulabh.

It's taken well over Rs 40 lakh for Sulabh to achieve this. Each toilet costs Rs 40,000-45,000 and some 30 men laboured for a month to make them, said Jain. The organisation is carrying out similar projects in adjoining villages of Mewat such as Hirmathla.

Jain said that while Sulabh has been working for better sanitation for a decade, it was Prime Minister Narendra Modi's historic call to make India open defecation free (ODF) by 2019 that gave their mission a boost. Stung by the dubious reputation that India was home to 58 per cent of all the people in the world practising open defecation, the government made constructing toilets a key part of its ambitious Swachh Bharat Mission (SBM) in 2014.

Over 320,000 villages have achieved this status so far, says the government’s SBM rural portal.

But as is typical of government projects, the claims on the website aren't always consistent with ground reality. There have been reports of officials hurriedly fixing toilet seats in houses and declaring villages as ODF just to meet targets. In many villages, toilets have come up that aren’t connected to anything, no sewer system or septic tanks.

Even Marora was declared ODF by the Haryana government months before Sulabh actually helped turn it into one.

But now that it has, people in this Muslim-populated village, most of whom work as construction labourers, are determined to keep it that way. Harchanda Kumar, an 80-year-old, recalls how police would catch men squatting in the fields in the past. They would scold the offenders and threaten them with fines. However, cops would leave them after realising that the destitute families could not afford to spend Rs 7,000-8,000 on a toilet.

"But now we have a sakeem," says Harchanda, referring to SBM as a scheme. He is thrilled that his sons and grandsons won't have to bear this humiliation anymore. The police don’t come to catch men in the fields now. They don’t need to.