Power From Biomass, Bio-Energy, Compost: How Other Countries Manage The Issue Of Stubble Burning 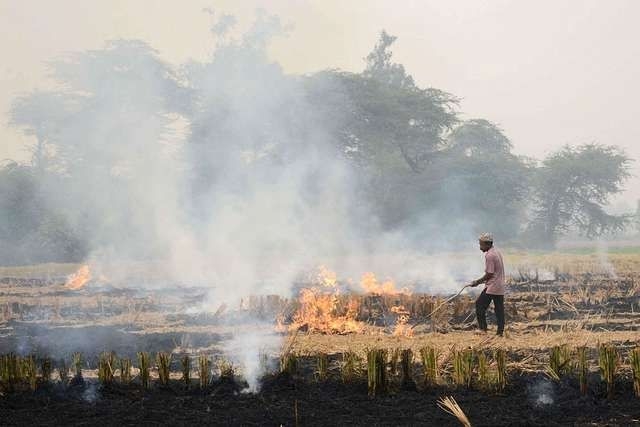 The problem of stubble burning on paddy farms continues this year too despite various measures being undertaken by the Union and state governments.

In fact, the number of cases this year is higher than last year despite the Union government and Delhi government pointing out to the dangers that such pollution could cause to novel Coronavirus patients, especially those whose lungs have been affected.

As the stubble burning leads to air pollution and affects the national capital Delhi badly, the issue has assumed global significance with many embassies of nations such as the US, UK and others taking note of it in view of the health hazard it causes to its staff.

The Supreme Court of India appointed a one-man commission of retired Justice Madan B Lokur to look into the issue.

Estimates peg rice stubble in Punjab alone at 20 million tonnes, and 80 per cent of it is burnt.

The Ministry of Agriculture has attributed the reason for the burning of the stubble and residue to lack of farmhands. Most of the burning takes place after harvest (April-May and November-December).

There are a couple of reasons why the stubble burning takes place and why it has become a tough problem to hand.

With farmers looking for higher returns, there is limited time for them to clear the field of the residues. Second, the usage of machine harvesters, which does the job quicker compared to manual labour, has also led to a higher percentage of residue on farmlands.

Third, states such as Punjab and Haryana have banned farmers from sowing paddy before the onset of the south-west monsoon on 1 June. The ban came into force as early sowing of rice in May led to the depletion of groundwater resources, thus forcing the states to crack down on it.

When the paddy crop was sown in May earlier, the stubble burning took place in September and there wasn’t much of a problem.

The crop residues burning not just leads to air pollution but also results in people developing health-related issues. A study conducted four years ago in Bathinda in Punjab showed that smog resulted in 84.5 per cent of people suffering from health problem with many reporting irritation in their eyes, nose and throat.

Nations such as China, the Philippines, Thailand, Malaysia, Japan, Indonesia, Nigeria and even Nepal use the stubble and other crop residues to produce bio-energy and compost.

The residues are also used as animal feed, composting, and even for mushroom cultivation.

In countries such as Australia and the UK, stubble burning is totally prohibited.

Data show that 62 countries produce electricity from biomass, using these crop residues. In China, the agricultural biomass helps to produce over 70,000 MW of power.

Biomass accounts for the entire power generated in China’s Jilin province since 2015.

Rice straw or stubble is also used to produce bio-ethanol which also ensures additional income for growers. In some countries, the stubble is retained on the farm for soil management and improving soil fertility.

In countries such as the Philippines, non-governmental organisations and growers have joined hands with the National Rice Research Institute to spread the awareness on the harmful effects of stubble burning and suggest alternate ways at local festivals.

But these are still not foolproof. In China, especially in the Hunan, Hubei, Anhui, Jiangxi and Jiangsu provinces, growers continue to burn stubble.

In order to get away from the prying eyes of satellites and authorities, they chose foggy days or nights for burning the stubble making it difficult to detect the culprits.

The Indian government does offer options to farmers to manage the crop residue problem but growers either lack the time or find them a little costly.

Options offered are machineries such as Happy Seeder that helps sow the next crop among the stubble, and rotavator which aids land preparation incorporating crop stubble.

Other solutions are the zero-till seed that encourages direct sowing in the stubble-filled farm, baler and reaper binder — both of which collect the stubble and bundle them into bales, paddy straw chopper which can cut paddy stubble and mix it easily in the soil.

As the machines are costly, the growers are offered at least 50 per cent subsidy to procure them, at least through farmer cooperatives.

In 2017, Union Minister of Road and Transport Nitin Gadkari suggested that rice straw could be used for manufacturing second-generation ethanol or bio-ethanol, which could be mixed with petrol, thereby, reducing fuel costs in India.

In September, the Department of Food and Public Distribution invited applications from entrepreneurs to set up ethanol manufacturing units and avail of the interest subvention scheme.

According to D K Sharma, Wholetime Director, Awadh Sugar and Energy, the ethanol scheme would stand in good stead for all sectors.

“Even if the Centre achieves its target to run the specified number of electric vehicles on Indian roads by 2030, the ethanol programme will have its utility since vehicles manufactured now would required fuel,” he said.

Rahil Shaikh, Managing Director, MEIR Commodities, said that the ethanol programme was a good one in the short and long-term.

While the sugar sector looks to the programme with hope, for the government worried over the stubble burning the ethanol plants would serve a good option, particularly when there could be a shortage in sugarcane supplies.

Experts also point to the Uttar Pradesh government’s initiative to barter the stubble for bio-fertilisers to encourage farmers to stop burning it. They say that the Union Government can come up with similar schemes to prevent the burning of stubbles.

With the Supreme Court directly monitoring the stubble burning issue, experts feel that is just a matter of time before all stakeholders find more than one solution.