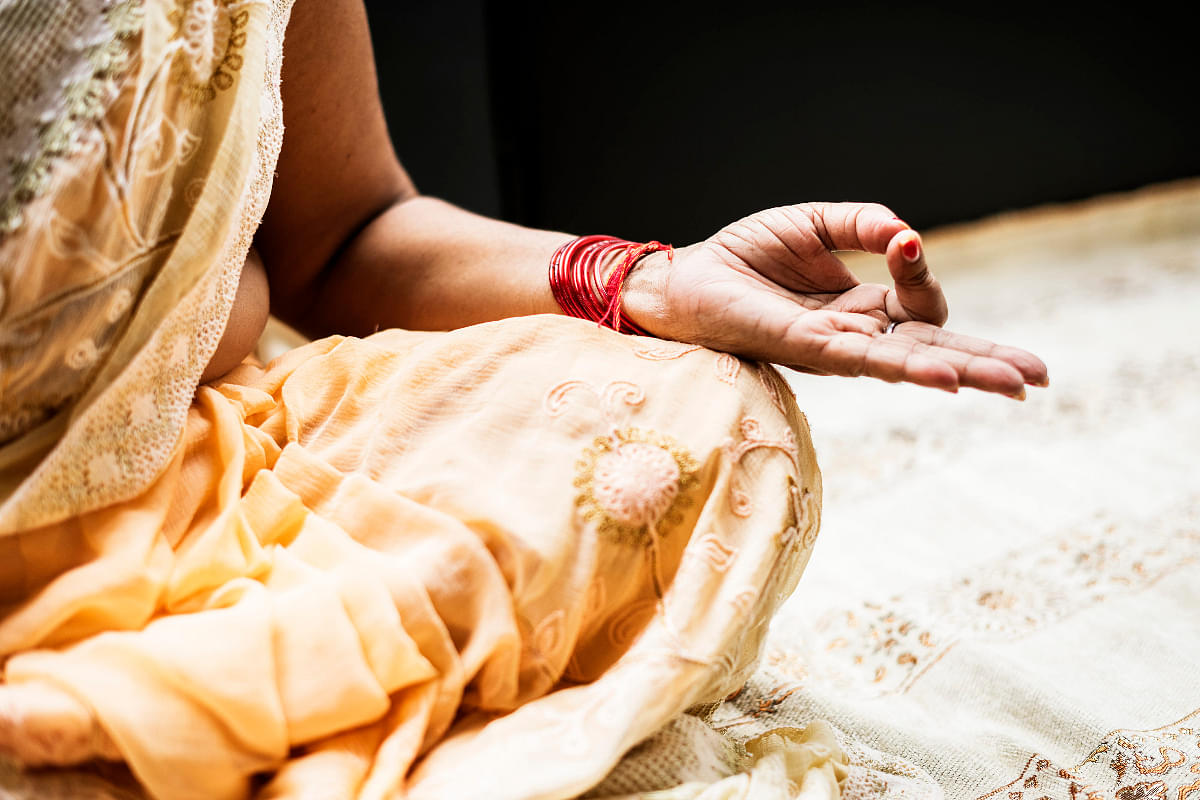 As the world braces to face the Chinese Virus using 21st century tools of science and public administration, there is an inner field of knowledge and action, created in ancient India and perfected over millenniums, that is equally important for recovery.

Part psychology, part yoga and part spirituality, this inner journey can be encapsulated in three words: quietude, silence and stillness – three forgotten words, three ideas being washed out of our current context, three forces lying latent. And three armours that could help us fight the ongoing pandemic.

As homo sapiens faces what seems like a new apocalypse, there is no inner protection as strong as the troika of quietude, silence and stillness.

This is not a replacement for preventive actions such as quarantine or live access to modern healthcare and medicines. But these provide the underlying strength in every being, especially in times of crises.

The crisis could affect an individual or a collective. It could be natural or manmade. But when Black Swans are the new normal and serial crises management the new routine, our outer solutions need inner strength. One individual at a time, they become the collective voice of the planet.

While managing the outer world through techniques that ‘flatten the curve’, we also need to work within ourselves such that both our outer as well as inner worlds come together to fight this Made in China malaise.

The inner aspects of our lives comprise several tattvas, traits. These include, but are not restricted to, conviction, discipline, action, inaction, self-control. But in our current world, where every human is bound together by screens and the constant flow of information overload they offer, we need to focus on this troika to strengthen ourselves from within.

There are two streams of thought that are dominating our conversations with ourselves around the virus from Wuhan.

The first is panic, the other inertia. Both need to merge at the intersection of quietude, silence and stillness.

The passive inertia needs to give way to a more living action. Burying our heads in the tamasic sands of hope or faith, for instance, will not prevent the virus from attacking us.

Likewise, the hyperactive rajasic panic too needs to be stilled – tracking every death, in every country, minute to minute, will not vaccinate us against the virus. Science or spirituality, there is no space for panic.

What happens to patients with panic disorder expands to include those without any such condition. “Panic attacks are characterised by a fear of disaster or of losing control even when there is no real danger,” according to the US-based National Institute of Mental Health.

The ongoing panic buying of toilet paper can be seen in this light. A related problem is hoarding, a brain disorder that prevents people from taking decisions to keep or throw.

Apply this individual problem to a mass panic situation and what we will get after toilet paper and sanitisers would be hoarding groceries.

Even though we live in the age of the mind, we remain rooted to instincts that belong to a bygone era. The evolution of homo sapiens from matter to life to emotive to mental has been one process of moving forward through absorption of new traits, not discarding old ones.

Dead matter turned into life body. The body sheath adapted and got vitalised to express feelings and emotions, which these merged into the body.

Finally, came the thinking mind, merged into the body-vital and now dominates the being.

At the peak of the mental age we live in today, man functions under the government of the mind, an abstract idea that rules over emotional expressions and physical body.

The three – body, feelings and mind – coexist. Our evolutionary traits, from matter to mind are now integrated into a unity.

Our past is captured in geographies, food chains, communities, civilisations, organisations, nations.

Our future will be determined by artificial intelligence, robotics, neurosciences. The mind has and will underline each.

Beneath this dominance, however, lies a state of constant treason. Forces may lie dormant until the mind is lulled into a routine. And when a crisis arrives, as it inevitably will, these forces rise to bring down the government of the mind and replace it with the anarchy of the vital.

An event such as the China-manufactured virus crisis or the US-created financial crisis of 2008, for instance, allows the sleeper cells of chaos to awaken and wreak havoc by turning the event into panic.

The fear of death and disease, poverty and its innumerable pain points, force the vital beast, generally caged by the mind, to flash its teeth, create dissonance, growl, attack and sometimes overcome the being by gouging out quietude, silence and stillness.

For a culture that is always on the move, and survival in which is through constant and intense engagements, quietude is smothered. Quietude, writes Sri Aurobindo in Letters on Yoga – II, is of three types – ordinary, calm and peaceful.

Quietude can segregate information about fighting the Chinese Virus from panic.

Once the protection of quietude is breached, the anarchic forces infiltrate the mind, weaken us. We need to snatch it back and bring ourselves back to a peaceful state where we can reach and take considered decisions.

For a society that demands a high-decibel shrieking to be heard, silence pays the price.

Silence lies one step beyond quietude; it is the absence of all motion — neither in thoughts nor in emotions.

Quietude can be a difficult idea to work with. The moment the mind is quietened, for instance, the vital cold rushes into the vacuum and create the old movements of fear and trembling.

So, even if we are able to be mindful about protection, the primal fear residing in all of us could fill the gap, affect the mind, scatter our energies. Silence provides us a distance from all these, a safe haven. The silent mind is one that is free from disturbances. It is calm. And it is open to forces of nature, and actions them.

“He has learnt the secret of restraint, he has controlled himself. He goes through the streets of a big city with all its traffic, and his mind is as calm as if he were in a cave, where not a sound could reach him; and he is intensely working all the time.”

For an ecosystem whose currency of discourse is success, which in turn is dependent on movement, stillness is the cost.

In the helpless, tamasic stillness we have no interest – that is the face of inertia. It is the active inner stillness that gives us spiritual sovereignty over our being. We become masters of our actions, and inactions, when we act from the point of stillness; otherwise, we allow nature to ride roughshod over our will.

As the Bhagwad Gita tells us through the analogy of the ocean and the incessant flow of waters from rivers merging into it, he who remains still despite movement attains peace. In that state, the need to overstock masks or antiseptic solutions vanishes.

“To be capable of silence, stillness, illuminated passivity is to be fit for immortality—amritatvaya kalpate,” wrote Sri Aurobindo in Essays in Philosophy and Yoga.

But don’t confuse this with lethargy. “The inaction of the tamasic man is a stumbling-block to the energies around him, the inaction of the yogin creates, preserves and destroys; his action is dynamic with the direct, stupendous driving-power of great natural forces. Infinite is the strength of the stillness and the silence, in which great forces prepare for action.”

Finally, it comes to tackling fear, of which there are four methods, according to Sri Aurobindo’s spiritual collaborator Mirra Alfassa, and popularly known as The Mother.

First, appeal to reason the inevitability of death or illness. Use science to prevent or cure it, but know that both lurk around the corner, within us.

Second, seek the inner light that lies “in the silent and tranquil depths of our being.” That light awakens us to the sense of immortality.

Third, use the mystic method; if we are believers, or follow religions, surrender to our God of choice.

And fourth, if we feel within our being the right to immortality, as some do, fight the battles on the mental, vital and physical planes and overcome fear, illness and death.

Conquering fear needs the tools of quietude, silence and stillness. These may be difficult ideas to comprehend, leave alone practice. But they are the essence of who we are.

In the world that has been neutered by hyper information and constant action, how do we engage with them?

At a point where everyone and his dog is shuddering in the expectation of uncertainty, how do we embrace this vastness within?

Perhaps, this coronavirus could be a practice session. We could support all our efforts such as social distancing, washing hands, shutting down, preparing the workplace, or working from home with a commensurate inner effort by wearing these three armours – the armour of quietude that works to prevent fear and panic; the armour of silence that powers solitude; and the armour of stillness that helps flatten the curve.