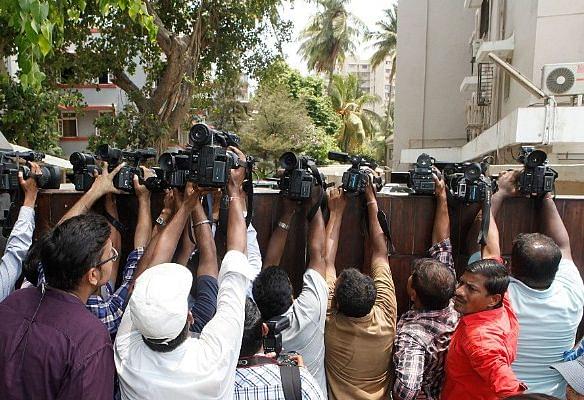 The day Big Media respects its footsoldiers, who are the real news collectors, their credibility will be restored. (Pratham Gokhale/Hindustan Times via Getty Images)

No matter who comes to power, Big Media always wins! This has been the state of play over decades in India. If their favourite political party is in power, they reap the benefits of the friendly regime.

If not, they ride the moral high horse and become the de-facto opposition, becoming a thorn in the flesh of incumbent governments. Weaker the political opposition, greater their power. They face no popular mandate, they take no feedback and unlike political activists, they get their salaries.

These days, ideologically animated journalists follow the 100-100 model. 100 people create trouble and 100 journalists amplify it with all instruments at their disposal. Connected with other left-liberal media outlets abroad, these stories provide a distorted version of events at home, thereby allowing them to flex their political muscles.

Not only is the image of the ruling dispensation tarnished, the country’s brand is damaged with implications on foreign relations and investments.

While it is unfair to paint all Big TV channels and newspapers with the same brush, I am clubbing mostly the left-liberal media in India as “Big Media” to make a limited point.

Also, by Big Media, I refer to the superstar editors, anchors and senior pros that have arrogated to themselves the task of safeguarding “democracy”, while employing patently undemocratic means and running undemocratic setups.

Recently, senior journalist Rajdeep Sardesai wrote a blood-curdling piece on the state of affairs and predicting that in 2029, India will transmogrify into some sort of a dystopia.

The irresponsibility and moral bankruptcy of the piece was so large that it did not elicit serious follow-up discussions.

Being one of the pioneers of TV journalism, it would have been productive had he taken the opportunity to ruminate on the state of affairs of his own profession and offered sage advice to the industry and the next generation of journalists.

In fact, saving Big Media from egomaniacal editors and superstar anchors will be their biggest challenge of the decade. These sensationalists rake in the moolah for their organisation, but the casualty is sobriety, sanity and moderation.

They refuse to come out of the hyper mode, appealing to baser instincts of society rather than pursuing the cause of educating and informing and thereby contributing to good citizenship.

Though the table-thumping model ruled the previous decade, it has lost its novelty. Slanging matches do no good and have only descended to become entertainment for the masochists.

The big churn in public discourse affected during the last decade by the expansion of social media. An industry that had so far faced no serious feedback, was smothered with quick fact checks, rebuttals of blatant distortions and many a times outright falsehoods.

Their feet were held to fire and they were unwilling to face the heat. Some reputations were buried; ask Barkha Dutt. Big Media failed the challenge badly.

They vilified social media as some sort of “deplorables”. Instead of taking feedback as opportunities to improve, they doubled down on brazenness.

It can safely be said that social media won the battle. In fact, at the turn of the decade, they are calling the shots. With clear metrics such as retweets and “likes” stories get the feedback, Big Media superstars now pontificate on Twitter and many times, social media stories find their way to the mainstream.

The question now is how can Big Media play the role adequately as the fourth pillar of our democracy. How can they differentiate and stay relevant in the public discourse given the chaos of social media?

If they maintain status quo, a full amalgamation with social media is inevitable resulting in serious consequences for public discourse.

Social media can be watchdogs. But we need solid Big Media to set the course of debate and provide authentic first drafts of history. We need the swarm of hard working reporters gathering news painstakingly, holding governments accountable.

Social media is sensationalist and is incapable by design to hold the centre. It is thus important that the few thoughtful Big Media honchos get their acts together and think things through deeply about how they can become beacons of sobriety and impartiality.

This author was privy to the work of such journalists when he was in the HRD Ministry. Except for a few sensational stories here and there, the work was solid.

It is time they come to the limelight. If there is virtue in the media, it is exemplified by beat reporters. Social media too has to somehow learn to meaningfully and respectfully engage directly with the beat journalists, bypassing the sensationalist brokers.

In fact, many beat journalists themselves find their uppity bosses and show-offs cringe worthy, and find the fame and big money earned on the back of their hard work unfair.

Every crisis is an opportunity. Big Media needs moral leaders who can drink the poison coming out of the churn and still be able to not lose sight of the bigger role of media in a democracy. Truly open and democratic systems always throw up leaders.

In our political history, it is apparent that time and time again, great sons and daughters emerge to provide succour to the society. There is no reason why we should not expect the same from the media.

While it is a moot point whether Big Media is truly meritocratic and open, the opportunity for someone to lead the decade is too inviting to pass up. There is no fun in Big Media being reduced to a few twitter handles.

Citizens never hear a good analysis/conference/talk show on the state of the media organised by the Editors Guild, Press Club or any such media organisations. Though they are quick to pontificate with faux morality on every other issue under the sun.

The dilemma and challenges facing Big Media are not unique to India. This has been the trend world over. Deep polarisation has left Big Media fraying at it seams. India’s Big Media should show leadership and set an example for the others to follow. They can teach the world how it is done. The onus to do this lies with the largest and noisiest media houses and journalists.