Private Schools In India Must Profit, Not Profiteer 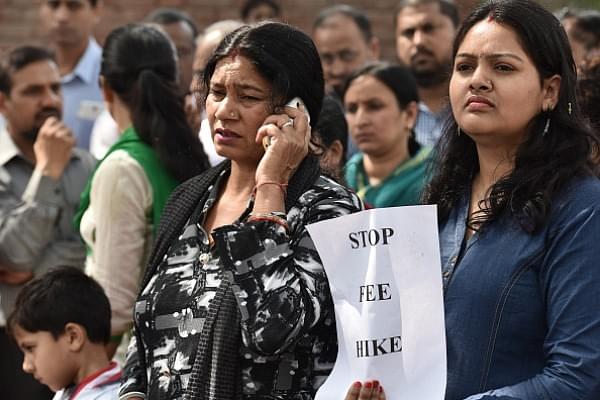 So, where did the students go from government schools?

Across India, leaving out the states in the North-East for lack of data, between 2010 and 2015, government schools lost 13,117,470 students while private ones gained over 17,518,00 students. However, the enrolment in private schools was less than 50 per cent of what it was in government schools.

Thus, while the private players had disrupted the market for education in India, they haven’t yet covered the entire population.

The National Achievement Survey conducted by the Ministry of Human Resource Development covered over 2.2 million students across 100,000 schools in over 700 districts. Across states, there is a visible performance decline in government schools as students move from Class-3 to Class-8. While a significant part of this outcome can be attributed to the flaws in the ‘Right to Education’ (RTE) Act, it also does showcase the falling standards of education in government schools.

With India moving towards becoming an upper-middle-class economy, the shift from government to private schools is explainable. One, in cities like Gurugram, Bengaluru, Chennai, Delhi, Noida, Chandigarh, and Pune, increased urbanisation and enhanced income levels have facilitated a higher number of enrolments in private schools.

Two, the infrastructure offered in most of these schools is far superior to what is being provided in government schools. Until the Swachh Bharat Abhiyan came into play, many government schools in urban areas lacked proper restroom facilities for girls.

Three, the importance of languages and science subjects has enabled parents to consider private schools as an option for their children, as evident by the enrolment numbers.

The shift is going to continue in the coming years too as India moves towards being a $5 trillion economy while doubling its per capita income. Therefore, for people across states, the affordability of private schools will be necessary, given the accessibility part has been sorted with the current and projected rise in private schools.

First and foremost, the government, through any law or policy, cannot dictate the fee that is to be charged by these schools. Yes, as a market solution, private players will and should commercialise their educational entities to ensure their sustainability, but it should be without government dictatorship on fee.

However, commercialisation must not amount to crony capitalism, as evident in some private universities today. In TMA Pai Foundation vs. State of Karnataka (2002), the Supreme Court stated that there was a need for the states to ensure there was no excessive profiteering while allowing for a ‘reasonable surplus’ in revenue.

The ruling was further affirmed in Islamic Academy of Education vs. State of Karnataka (2003) and Modern School vs. Union of India (2004) where the court allowed a reasonable surplus for private players to further develop and expand their entities.

However, this has not stopped certain states from engaging in regulatory activism. While RTE prohibits the capitation of fee in private schools, Karnataka requires the fee to be declared at the beginning of the academic year. Uttar Pradesh restricts the fee increase to 10 per cent for three years. In Andhra Pradesh, the fee charged cannot be utilised for any other purposes than prescribed. In Haryana, some rules provide for the regulation of fee that varies across school levels. Karnataka has an upper limit when it comes to the fee that can be charged by private schools. Some other states are also considering their versions of regulatory laws to curb the fee charged in private schools.

Regulation without diktat is an idea that cannot be entirely dismissed. However, it cannot be denied that crony capitalism in the private school realm can hurt the prospects of aspiring urban Indians. Thus, while there is a genuine need to ensure that the revenues of individual players are not curbed or regulated in a manner that harms their development and expansion possibilities, states must engage with both parent bodies and school managements to strike a balance to understand the fee that is to be charged.

Today, a certain school chain in Gurugram charges more than Rs 10 lakh as a one-time payment for students when they begin with Class-1. The fee covers their education till Class-10. In other urban pockets, the fee for any good school ranges between Rs. 60,000-Rs. 150,000 annually. The variation in fee depends on the infrastructure being offered. However, does good infrastructure necessarily amount to a good school?

All private schools, irrespective of their infrastructural superiority must be evaluated from a set of learning outcomes that include academic, cultural, sport, and other curricular activities. The regulation should not amount to restriction, and while parental concerns must be taken into account, the priorities of private players cannot be ignored.

The government is not the ideal option when it comes to management of expenses on education. In 2010-11, the government spent a staggering Rs. 480 crore on the salary of over 14,000 teachers in 4,400 government schools. Ironically, the number of students in these 4,400 schools was zero.

Urban India needs private schools for two major reasons. One, our government schools are in a mess, which will take at least another decade to be sorted out. Two, the urban aspirations for education can only be met through private players. Thus, there is a case for curbing the crony capitalism of private players, but it should not come at the cost of the players itself.

The fine line between commercialisation and crony capitalism is what a state or government regulation must be when it comes to school fee in the private sector.