Rabbits, World Maps And Mahabharata: Seeking The Truth Through Tradition And Science 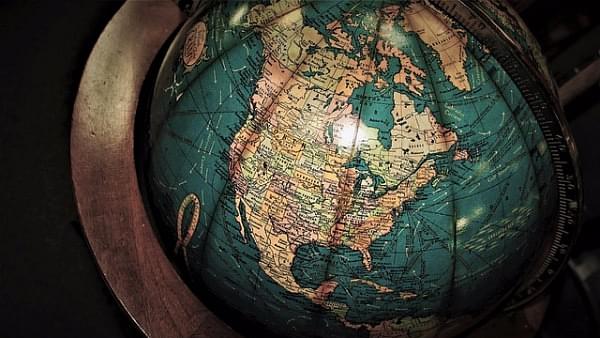 The Earth’s geography is described in the Mahabharata, reported here, as looking like a rabbit and the sacred peepal tree leaves (ficus religiosa). Then, a claim is made. If the conventional modern world map is rotated 180 degrees, it looks amazingly similar to what the Mahabharata has said about Earth’s shape as seen from space.

This story has been repeated in many other websites which propagate Hindu dharma and culture.

The same claim has been made by His Holiness Tridandi Chinna Srimannarayana Ramanuja Jeeyar. In a lecture from 2011 delivered at the Indian Institute of Technology (IIT) Madras, with a benign smile, Jeeyar asked the audience if they knew when the modern map of the world was made. He then asked his audience if they think a fairly accurate map of the world could have been made without help from the views from above – like from satellites. Then he pointed out that in the Mahabharata it was said in one place that “the picture of the Earth was reflecting on the moon and there it looked like as if a rabbit is standing on its legs trying to catch hold of a big bush in front of it”. He then proceeded to show the rabbit and the big bush. When the rabbit, poised to jump on the bush, was morphed into the conventional map of the Earth, the audience broke into a tremendous applause.

Now many Hindu websites have repeated this claim but after adding their spin to it. ‘First ever World Map was sketched out based on this Mahabharata verse!’’ This ‘first world map’ is attributed to none other than Sri Ramanuja, the great egalitarian Vaishnavaite seer who practised Vedantic humanism.

Between that lecture and the claim on the website, we have two peepal leaves instead of a bush. So, then, what is the truth?

Let us first look at what the Mahabharata verses actually say. The verses are from ‘Jamvu-khanda Nirmana Parva’, which in turn is within the Bhishma Parva book of the Mahabharata. Here, Sanjaya explains to the blind king Dhritarashtra thus:

O son of Kuru’s race, I will, however, describe to thee the island called Sudarsana. This island, O king, is circular and of the form of a wheel. It is covered with rivers and other pieces of water and with mountains looking like masses of clouds, and with cities and many delightful provinces. It is also full of trees furnished with flowers and fruits, and with crops of diverse kinds and other wealth. And it is surrounded on all sides with the salt ocean. As a person can see his own face in a mirror, even so is the island called Sudarsana seen in the lunar disc. Two of its parts seem to be a peepul tree, while two others look like a large hare. It is surrounded on all sides with an assemblage of every kind of deciduous plants. Besides these portions, the rest is all water.

As anyone who has read the passage can see, what the verses describe and what the purported morphing of the nineteenth-century world maps to that imagery suggests need a tremendous volume of suspension of disbelief.

In the Indic tradition, the puranic geography is often pointed out to be the symbol of inner cartography. A good example is the work of Nilakantha Chaturdara of Maharashtra who lived in the second half of the seventeenth century. He collected manuscripts of the epic from different parts of India and brought out a comprehensive version of it. He also wrote a famous commentary on the Mahabharata, which in itself was based on previous traditional commentaries. This was named ‘Bharata-bhava-deepa’ (‘Light on the Inner Significance of the Bharata’). In this commentary, he says these specific verses have an inner meaning – thus Sudarsana becomes the mind.

The map in question was not drawn by Sri Ramanuja (1017-1137). It was actually drawn by Sriman Thiruvenkata Ramanuja Jeeyar (1806-1877). The first world map showing both the Americas and, fairly correctly, other continents had come into existence by the nineteenth century itself.

So by the time of Thiruvenkata Ramanuja Jeeyar, the Western maps showing Asian, European, African and American continents had arrived in India. All that the nineteenth-century Jeeyar did was, to take the Mahabharata verses and do some ingenious, meticulous manual morphing of the map to fit the verse.

Yet this nineteenth-century attempt by Jeeyar is important only because it shows one way in which Hinduism faced the challenge thrown to it by modern science and missionary propaganda. It shows the way that should be avoided. At least Jeeyar was perceptive enough not to challenge the map but tried to integrate it into his scriptural knowledge.

Though Christianity itself had a confrontation with the natural sciences because of its adamant literal and fundamentalist adherence to Biblical mythology, by eighteenth and nineteenth centuries, the missionaries had started using the knowledge generated by then modern cartography to challenge the puranic geographical descriptions of both Hindus and Buddhists. While we need to do the necessary research for what transpired in such confrontations between Hindu scholars and missionaries, in the case of Buddhists we have some well-preserved documents of such debates.

For example, in 1873 in Sri Lanka, a Wesleyan missionary, David da Silva, held up a globe during a debate with an audience of 5,000 people and asked Buddhist monk Gunananda to locate Mount Meru. If it was 80,000 yojanas high, 80,000 yojanas wide and 80,000 yojanas long and at the centre of the Earth, how was it that, asked the Christian preacher, it could not be seen by the humans? According to one report, an irritated Buddhist monk yelled from the audience, asking the reverend to climb on top of the tree of knowledge in the Garden of Eden and then he would be able to see Meru.

Interestingly, a Japanese scholar of the eighteenth century, Tominaga Nakamoto (1715-1746), who was perhaps the first scholar (whether Asian or European) to study Buddhism in a historical context, provided a Hindu-Buddhist interpretation to such cosmologies. In a passage that is relevant even today, the Buddhist scholar first acknowledged that such imagery had been borrowed from Vedic religion and went on to call those who wanted to find empirical “rights and wrongs of such things” as “small-minded people”. He cautioned against “people who have indulged in taking this up again when putting together theories about the universe” and said “it is extremely squalid, indeed ridiculous”. Then he concluded: “Teachings about the cosmos are in actuality quite vague and do no more than tell us of the inner workings of the mind. There is no way of knowing whether they are right or wrong. Hence I say that the cosmos arises on the pattern of people’s minds” (‘Emerging from Meditation’, 1735-1737).

Unfortunately in India, despite traditional commentators clearly providing the inner significance of such map-making in the language of Puranas and Itihasas, the emerging scholars tended to dismiss them. For example, Kisari Mohan Ganguli, who did a meticulous translation of the Mahabharata into English (1883-1896), calls Nilakantha’s interpretation as “seeking to put sense in non-sense”. Naturally, one can understand the socio-cultural context in which Thiruvenkata Ramanuja Jeeyar was trying to invent in the verses of the Mahabharata the world map of his century. However, the development of inner sciences and a deeper understanding of world mythologies have shown that the Indic tradition of cosmologies and puranic sacred geographies were created consciously to serve a deeper purpose. Even Western Indologists are beginning to acknowledge this aspect. Dr Ariel Glucklich points this aspect out:

The narrator (suta) of this vast cosmography was both a realist and a rationalist. He prefaced his geography lesson with a reminder to his audience that the true divisions (dvipa) of the world added up, in fact, to thousands, and that both his seven- and four-part schemes were only simplifications. Only reason, he added, should be used to explain immensities or realities that extended beyond common experience. His maps, in short, were representations of something greater—mere facsimiles, however reasonable. He seemed to be urging restraint among his listeners when they considered comparing what they heard in his narration to what was truly out there in the world.

Dr Glucklich says it “is still good advice for modern readers of the Puranas”. As ever, however, it was the great seer-poet Sri Aurobindo who provides (as early as 1920) a holistic way of looking at Puranic cosmology while warning about the pitfalls. The passage below from Sri Aurobindo’s Foundations of Indian Culture, though a bit long, provides the key to understanding the ‘fantastic geography’ of Puranic and Itihasic lore:

The so-called fantastic geography of the Puranas, as we are expressly told in the Puranas themselves, are a rich poetic figure, a symbolic geography of the inner psychical universe. The cosmogony expressed sometimes in terms proper to the physical universe has, as in the Veda, a spiritual, and psychological meaning and basis. It is easy to see how in the increasing ignorance of later times the more technical parts of the Puranic symbology inevitably lent themselves to much superstition and to crude physical ideas about spiritual and psychic things. But that danger attends all attempts to bring them to the comprehension of the mass of men and this disadvantage should not blind us to the enormous effect produced in training the mass mind to respond to a psycho-religious and psycho-spiritual appeal that prepares a capacity for higher things. That effect endures even though the Puranic system may have to be superseded by a finer appeal and the awakening to more directly subtle significances, and if such a supersession becomes possible, it will itself be due very largely to the work done by the Puranas.

So we have on the one hand the traditional and yet scientifically sound way of approaching the poetic language of ancient Indic literature. We can understand what psychological and spiritual dynamics were at work in creating these cosmologies and sacred geographies. To proceed through this path, one needs an in-depth study of our tradition as well as of modern sciences, particularly psychology. It is to walk in the path of Patanjali, Thirumular, Nilakantha and Sri Aurobindo.

It requires from the seeker hard work, lifelong perseverance and intelligence of high quality. To make it a discipline, we also need to build institutions. On the other hand, we can do a demonstrably wrong, laughable Zakir Naik-type of science-religion mapping to humour our petty egos and, in the process, become a laughing stock of any intelligent mind that seeks truth. And Zakir Naik is a terrible tragedy that can befall any religion.