Random Meditations Through Her 1000 Names - XII 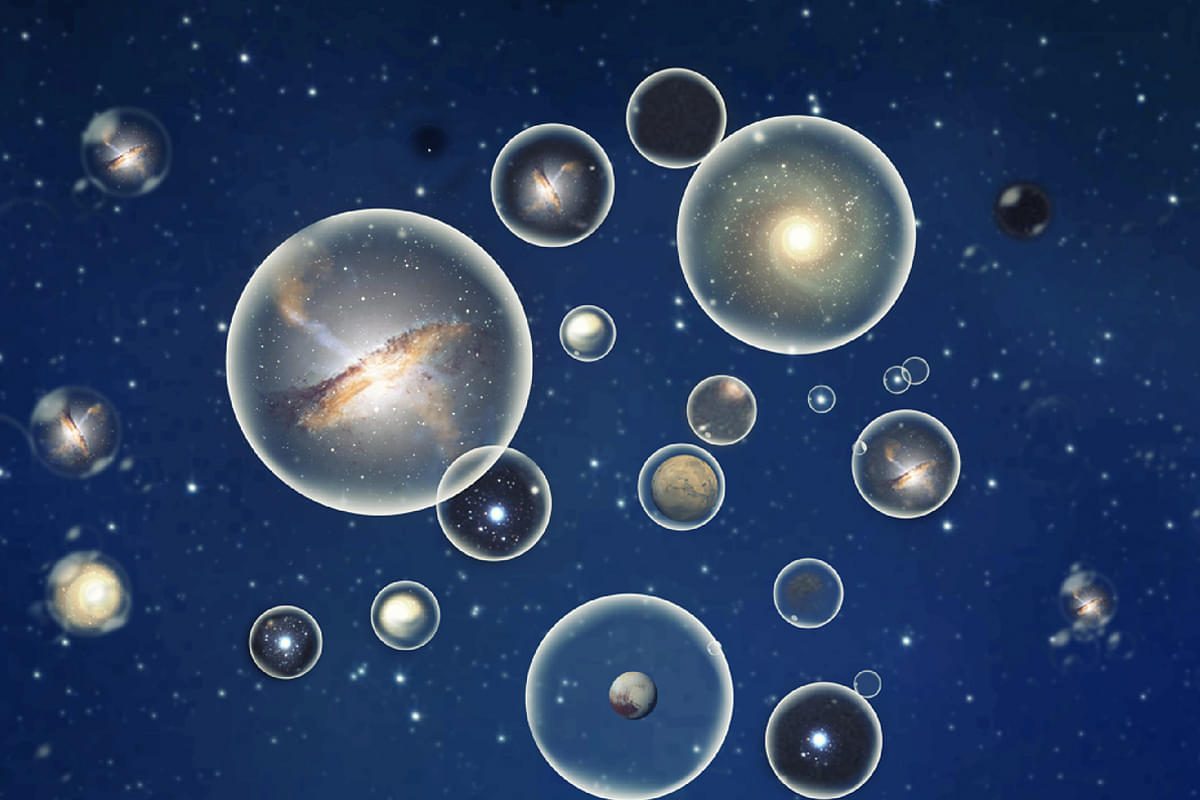 Nijarunaprabhapuramajiiadbrahmandamandala - She who immerses all the universes in Her true red effulgence of the dawn.

This name is the start of the description of the form of the Goddess in all its glory from Her tresses to Her feet. It connects to the sixth name - Udyadbhanusahasradbha through the symbolism of dawn. As seen already in the meditation on Her sixth name, the dawn is the vimarsa form of the Goddess. We have also seen that Kshemaraja, the disciple of Abhinavagupta, calls vimarasa form as 'the non-relational, immediate awareness of ‘I' and hence ‘the self-surveying of self’ which he also calls as 'Parasakti, Paravak, Svatantrya, Aisvarya, Kartriva, Sphutatta, Sara, Hrdaya, Spanda.’

Combined together, these two names mean that She not only gives birth to countless universes but also that She immerses all the multiverses in Her true (Nija) red (aruna) effulgence (prabha) of the dawn.

Why is the true or ‘Nija’ nature of the dawn effulgence emphasised in the name? What Sri Aurobindo explains in his commentary on the Vedic hymns on dawn, holds true here as well. He points out how Vamadeva, the Vedic seer, ‘not only does ... speak of the Dawns “encompassing the worlds immediately with horses yoked by the Truth,”… (RV. VI.65.2) but he speaks of them as “happy, and true because they are born from the Truth”; and in another verse, he describes them as “the goddesses who awaken from the seat of Truth.”’

What Sri Aurobindo highlights as the relation between dawn and truth becomes very relevant to the use of the term ‘Nija’ as used in this name:

In our psychological interpretation of the Veda, we are met at every turn by the ancient conception of Truth as the path to Bliss. Usha, the dawn of the illumination of the Truth, must necessarily bring also the joy and beatitude. ... Dawn is sometimes described as rtavari, full of the Truth, sometimes as sunrtavari. She comes uttering her true and happy words, sunrta irayanti. As she has been described as the leader of the radiant herds and the leader of the days, so she is described as the luminous leader of happy truths, bhasvati netri sunrtanam (I.92.7)

The Secret of the Vedas

With the term brahmandamandala, we move beyond the manas. The previous names describe the raga, krodha, manas and tanmatras as weapons in Her arms. Here, the term brahmandamandala refers to the buddhi in its macrocosmic aspect, which is also the Hiranyagarbha. The andas or eggs of brahma which form the brahmanda include Virat, Hiranyagarbha and Isvara. They all originate and are immersed in Her effulgence.

Indologist Dr George Feuerstein explains the relation between the buddhi and Hiranyagarbha from the point of view of Vedanta:

In the Vedanta tradition, the buddhi in its macrocosmic aspect also bears the designations of “golden germ” (Hiranyagarbha) and “lord of creatures” (prajapati); ... (I)n Vedanta, the buddhi also designates the higher mind, or reason. It knows things only by virtue of having the Self’s Awareness illuminating it, whereas in reality it is an insentient principle evolving out of the ground of prakriti. This illumination is often explained as the Self being mirrored in the higher mind (see, for example, Upadesha-Sahasri 18.70). It is this reflected consciousness that wrongly presents itself as true Self-Awareness.

The Psychology of Yoga, Shambala, 2013

Again, despite the forms and names attached to Hiranyagarbha/Isvara, the principle should not be taken in a fundamentalist literal way. Indologist Paul Deussen (1845-1919) explains this aspect of Hiranyagarbha, particularly with respect to the physical universe, in a passage that can be construed as anticipating John Wheeler:

On other lines ... just as the “pure knowing subject” (the eternal eye of the universe) of the philosophy of Schopenhauer, corresponds to the cosmic intellect as sustainer of the universe (Hiranyagarbha, Mahan). For the metaphysical comprehension of the universe, this idea is indispensable. We know (and the Indians knew also as early as Brih.2.4.5) that the entire objective universe is possible only in so far as it is sustained by a knowing subject. This subject as sustainer of the objective universe is manifested in all individual subjects, but is by no means identical with them. For the individual subjects pass away, but the objective universe continues to exist without them; there exists, therefore, the eternal knowing subject also (Hiranyagarbha) by whom it is sustained. Space and time are derived from this subject. It is itself accordingly not in space and does not belong to time, and, therefore, from an empirical point of view, it is in general nonexistent; it has no empirical, but only a metaphysical reality.

The philosophy of the Upanishads, 1906

There is a possibility of buddhi at the psychological level and Hiranyagarbha at the cosmological level being misidentified with the ultimate reality. The idea of a monotheist deity develops at this point and this deity in turn can be used as a tool to further explore deeply the reality and understand it as an evolute from mula-prakriti. There is also a possibility that the form, Isvara, can be a devolution into an ego-god – then it verily becomes Hiranyakasipu, the Asura who imposed his own cult worship on all, destroying theo-diversity. Hence, it is important that the monotheist god is understood in the context of the larger matrix of Divine Consciousness from which he/she (it is seldom a she though) emerges. Once again, here, the statement of Michio Kaku would not be out of place: ‘Genesis occurs repeatedly in a timeless ocean of Nirvana’.

This aspect of ego-god/creator has been brought out in the gnostic tradition where the creator-god, bereft of the light of Consciousness, declares himself ‘the god’. The passages from different gnostic texts are striking.

According to ‘Hypostasis of the Archons’, the creator deity proved himself blind with this declaration: "It is I who am god; there is none [other apart from me]." Another Nag Hammadi text 'On the Origin of the World' depicts the creator-deity telling the angels thus: "I am god, and no other one exists except me." Yet another book in the same codex titled Secret Book of John has the creator god say that "I am god, and there is no other god beside me" and then the text explains that the creator so spoke 'for he is ignorant of ... the place from which he had come.' The creator, however, goes on and declares, according to the Secret Book of John: "I am a jealous god, and there is no other god beside me." Sophia, the goddess of wisdom, now calls him the blind god. This tradition, now lost to the monotheist West, perhaps, may have evolved independently or may have Indic influences. The founding fathers of the church did find in what they called gnostic heresy the influence of Brahmins who saw ‘that god is light, not like the light one sees, nor like the sun nor fire, but to them god is discourse, not that which finds expression in articulate sounds, but that of knowledge (gnosis) through which the secret mysteries of nature are perceived by the wise'. (Elaine Pagels, 1989)

In Hindu Puranic tradition, there is a similar anecdote. The creator-deity Brahma became conceited and Muruga punishes him. Muruga or Skanda carries the spear of jnana, he gets from the Goddess. He makes Brahma realise that the creation actually projects out of the pranava, which is the sound symbol of Consciousness.

In Sahasranama, there is yet another name which keeps us away from the lure and pitfall of anthropocentrism and creationism (including the so-called intelligent design) - that She is one who makes these multiverses with all the implicit orders in them in the form of respective cosmological constants emerge as Her play- Leelakluptabrahmandamandala (648).

Nijarunaprabhapuramajiiadbrahmandamandala through Isvara also takes on the meaning that Isvara-hood, which is the illumination of Consciousness, permeates and immerses all the universes - brahmandamandala. This is exactly what the first verse of Isavasya Upanishad says: Isavasyamidam sarvam yatkinca jagatyam jagat - that godhood permeates all the ever-changing existence - which is the red illumination of the Goddess immersing all the universes.