RCEP A Medium-Term Option, India Can Start Preparing By Declaring Its Intent To Be An Economic Power By 2050 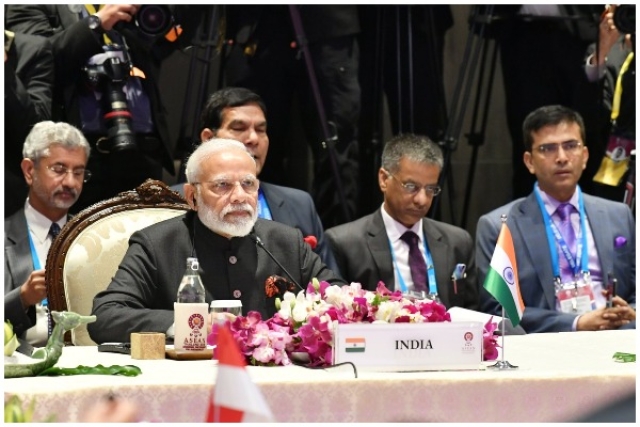 The debate over RCEP (Regional Cooperative Economic Partnership) is one of those controversies that lends itself to shades of grey.

I am in a dilemma.

As a free trader, I find it hard to support protectionism of any kind. Not that RCEP is perfect: it is criticised for potentially hurting India’s generic drugs industry, and making IPR (intellectual property rights) thefts easier.

On the other hand, there is the (correct) argument that India has not matured as a manufacturing power, and that it would be swamped by imports from others who have.

The latter, of course, is a negative argument based on fear and insecurity, which led to the Nehruvian Stalinist License Raj, wherein we infamously got lousy goods at inflated prices.

So we must compete where we are strong. But how? Even in areas where we once had an advantage, we have lost it, for e.g., in garments.

How? Through bad policies, and perhaps an inappropriate Constitution, which had ‘cut and paste’ ideas from constitutions of rich nations, before we became rich ourselves. And social justice warrior memes that have had no discernible value for the poor.

The fact is that Indian industry cannot compete, and it has no real core competency. It is tragic that we are at this juncture in 2019, 28 years after Narasimha Rao opened up the economy.

In a corresponding time frame, 28 years after they opened up, China had done much better than India has. Why? It is because of core competence and strategic intent.

China declared its strategic intent in unmistakable terms: it will strive to be Number One in the world in everything: economic power, military power, soft power, literally everything, by 2050.

Where has India articulated its strategic intent? Why doesn’t India boldly declare that it intends to be the #1 economic power in the world by 2050? It is not laughable. Admittedly, it is a stretch, but all worthwhile things are.

If Indians believe they can be #1 in the world, they will come up with brilliant ideas to make it happen. Yes, instead of just sniping about ‘The Establishment’, Indians will invent new things. And no, not jugaad, which is not scalable. Real ingenuity, brilliant innovations.

Consider what happened, as the late C K Prahalad pointed out in his seminal article in the Harvard Business Review, when tiny Canon decided to take on the superpower in the world of printing and copying, Xerox.

Step by step, Canon acquired the core competences to get there, and by reinventing printing (the desktop printer), it defeated Xerox. Canon is a world leader in opto-electronics, while its erstwhile foes Xerox and HP are trying to merge to survive in a shrinking market for printing.

India doesn’t have any idea of what its core competencies should be, although here’s my belief on what those competencies could be: agriculture and intellectual property. These are what we were good at throughout history: the respect for the cow and the Brahmin are indirect indicators.

Not for us large-scale manufacturing behemoths that poison the land (as the Chinese are now finding out, to their chagrin).

Let’s take a look at the core competence of the few countries that are ahead of India in the world GDP figures: the United States (US), China, Japan and Germany.

What is the US’ core competency? It is marketing. They are champs at selling dreams; plus they have the immense resources of a continent-sized land, and highly innovative people.

As for China, a friend, who competes with them, said it is tooling; that is, the ability to quickly do the mechanical engineering design to mass-manufacture. Plus subsidies, thus zero-cost capital.

With Japan, it is miniaturization, packaging. And perhaps fermentation technologies. They also have excellent organizational skills and a high level of integrity.

And finally, Germany excels in precision engineering and bulk manufacturing, as in chemicals. Their many rivers lend to ease of transport; and they possess a high level of integrity.

This is the competition. How can an India -- lacking organization, adherence to contracts, speedy legal recourse and infrastructure -- compete with these people? It has to be through ingenuity, changing the playing field, and innovation.

Can India do it?

Probably not with the current education system, extremely low investment in R&D, and an inefficient bureaucracy.

We need a quantum leap, and part of that comes from believing in ourselves and having an unabashedly nationalistic, even jingoistic curriculum in school. A narrative that drills into the heads of Indians our manifest destiny to be world leaders.

And the ejection of English, which automatically makes us second-class, from its pride of place.

When we have reached a stage of comparative advantage in certain areas, then we can sign broad free-trade agreements. In the meantime, more narrowly-focused, bilateral agreements may be the answer.

This is especially because, let’s face it, China has been known to cheat on a grand scale on its commitments in trade. They will dump products; they will play games with country of origin by marking their products as “Made in Laos” or “Made in Macau”.

As for agri-products, nations do subsidize them heavily. I hear every cow in Japan is subsidized to the tune of $7 per day. Surely Australia and New Zealand do the same. This can’t drive Indian farmers out of business, just as the US Farm Bill already leads to cotton farmer suicides.

There is absolutely no room for complacency, or a return to the fat, dumb and happy crony capitalism of the past. But until we fix structural deficiencies, RCEP would devastate small Indian producers.

Taking the example of Germany’s mittelstand, our MSMEs need to be supported.

Thus RCEP, or for that matter the rival TPP (Trans-Pacific Partnership) is a medium-term option for India. However, by showing no deference to China on both RCEP and on BRI (Belt and Road Initiative), India has done some signaling: we are not your vassals.