Scientific Studies Are Shrinking The Gaps Between Plants, Animals and Human Beings 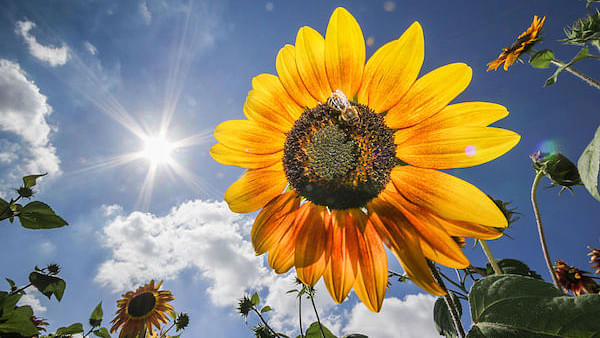 Consider the following: A coin is thrown and as it falls you are given a choice. Either you make no guesses, or you make a guess as to head or tail. In the previous instance, you stand to get Rs 5000, irrespective of the outcome. But in case you choose to make a guess, then if you win you get Rs 10,000 and if you lose you get not a single paise. So which option you will prefer? Either make a guess and win Rs 10,000 (and in case it is wrong, get nothing) or do not make any guess and make the safe Rs 5000? Mostly people opt for the safe Rs 5000 than take the risk.

Now consider the following situation. You are in a town without any money. And it is confirmed that the town is going to fall prey to an invading ISIS army. You are bound to die within the next 24 hours unless you flee the town. To escape, you need Rs 8000. The rescuer tells you strictly: “No. Rs 5000 will do no good. It is either Rs 8000 or you stay here and meet your doom.” Now you are approached with the same game, and that is the only way you can have any money at all. Now what will you do? Go safe with Rs 5000 or take the risk? Of course, most people will take the risk. But is this mindset limited to only human beings?

Recently in their paper published in Current Biology, researchers from Israel and England have detected similar context-sensitive “risk-taking” abilities in pea-plants. Pea plants had their root systems split into two pots. One pot soil gave the plants the needed nutrients in the required quantity in a constant way. In the other pot, the supply was inconsistent. So the plants developed more roots into the pot with the regular nutrients. Then the scientists decreased the nutrient availability in the constant nutrient pot to levels lower than the needed quantity for plant growth. So the nutrient supply was consistent in the pots but lesser than the minimum required quantity for plant life processes. The other pot was as ever inconsistent— the nutrient levels fluctuated— no guarantee that the nutrient levels would always be sufficient, but there was the possibility. So now the plants started increasing the roots in the pots with fluctuating nutrient availability. In other words, plants seem to exhibit the same “risk-taking ability” which has been hitherto explained only in “higher animals.”

Hagai Shemesh who is with the Department of Environmental Sciences of Tel-Hai College, Israel, is one of the co-authors of the paper. He is careful not to attribute any idea of self-awareness to plants based on this study alone. “I would not call it ‘thinking’” he said, answering queries about the experiment from Swarajya: “One would have to carefully define thinking and its link to consciousness before it can be decided if plants think or not.”

Even if he would not go so far to say that the plants were self-conscious, he answered in affirmative to the question of science taking the direction of being more and more empathetic across the species boundaries: “Yes, in the sense that we are slowly acknowledging some of the creatures that were previously underestimated.”

He thinks that the correct way to see this is that things that we once thought could be done only by organisms with complex brains are now shown to take place in more “simple” organisms. “I think it shows that simple mechanisms can create complex behaviour.” At Tel Aviv University is biologist Daniel Chamovitz, Dean of the George S. Wise Faculty of Life Sciences and author of the famous book What a Plant Knows: A Field Guide to the Senses of Your Garden- and Beyond (2012). To the question whether plants “think”, he answered to the Scientific American, that plants exhibit only “elements of anoretic consciousness” which do not include the ability to think.

In a remarkable passage that anticipates the views of Dr Shemesh and Dr Chamovitz, Sri Aurobindo wrote in his Life Divine (1914-21)—

“the seeking and shrinking of the plant, its pleasure and pain, its sleep and its wakefulness and all that strange life...is then a sub-mental...has precisely the same initial reactions as the mental, but is different in the constitution of its self-experience..”


Sri Aurobindo’s spiritual collaborator was Mother— Mira Alfasa— a Sephardi Jew and initially a disciple of Max Théon (1848–1927), a Polish Jew and Kabbalist seer. She considered that there were ways humans could communicate to plants: “They speak to us if we know how to listen to them— it is a subtle and fragrant language.”

In her notes dated 7 April 1917, she recorded how, through sitting still, she could identify herself with a single cherry-blossom: “I became suddenly cherry tree itself”, she wrote,“..now the blood of the cherry-tree flows in my veins and with it flows an incomparable peace and force.”

The reader may view this as a mystic or new-age vision, and not science. However, such feeling of oneness with plants has been the way of the shamans in many cultures. Anthropological literature overflows with such accounts where shamanic traditions have their seers become “one” with plants and communicate with them to learn how they can heal humanity or bring visions to them.

Science may tentatively touch this aspect of knowing as well. Professor Anthony J. Trewavas at the Institute of Cell and Molecular Biology of the University of Edinburgh is well known for his work on plant physiology. He has been a champion of plant intelligence for many years now. He considers the phenomenon “as an emergent property resulting from interactions and communication of the component tissues.” It is by studying the intricate molecular signalling network in plants that Trewavas came to the conclusion that there is intelligence in plant behaviour.

Interestingly, anthropologist Jeremy Narby— who studies both shamans and scientists in their interaction with plants— describes one of the ways Trewavas gets insights about the plant molecular pathways, which is “sitting in an armchair, not moving, thinking about plants.” Narby adds, “He was acting like a plant to understand plants and attributing intelligence to them. Like a shaman, he identified with nature in the name of knowledge.” (Intelligence in Nature, 2006)

Is it possible that even as science is making us realise more and more that other species are not qualitatively different from us in their essence and actions, the methods of science are themselves evolving to make us a more empathetic species? Interestingly, a new paper is being published that shakes another basic foundation of human uniqueness: dogs process the meanings of words that human utter, in their left hemispheres, while processing the intonation of the words of the human language in the right hemisphere— just as how we humans process language.

Empathy No Longer Divides Humans And Chimps. What Now?

Do Insects Have Feelings?