Shiv Jayanti: How Subramanya Bharathi Saw A Symbol Of An Awakened And New India In Chhatrapati Shivaji 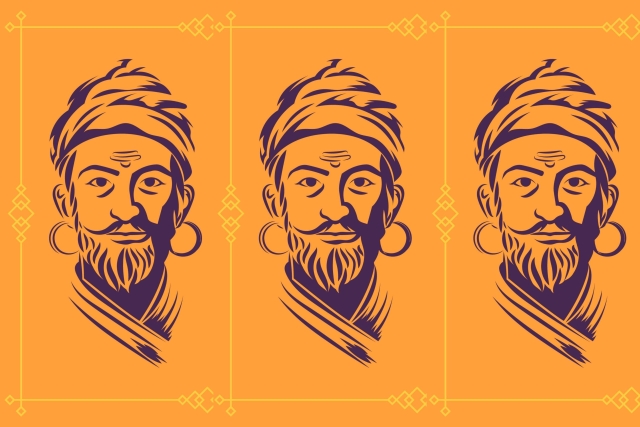 Chhatrapati Shivaji (1630-1680), also called Veer Shivaji, should be considered as the one who envisioned India as a modern united nation-state founded upon the principle of Hindutva.

Hindutva, which has been maligned in the parlance of today’s pseudo-secular polity, is the fountain head of modern India. The conception of Veer Shivaji’s Hindavi Swaraj was at once rooted in ancient tradition and also in his future vision of Bharat as a free sovereign nation-state rooted in Dharma, in the most expansive meaning of the term.

Therefore, it is no wonder that the term he used, Swarajya, defined the freedom movement of India.

It is an interesting phenomenon that two national poets of India, Rabindranath Tagore and Subramanya Bharathi, both sang of Veer Shivaji.

For Bharathi, there was also another intimate connection with warrior-king – Mother Bhavani.

Just like Shivaji, Bharathi too was divinely intoxicated in his devotion for the Mother Goddess.

Whenever he found the pain of the nation unbearable, he would run like a child to the Divine Mother and burst into soul-wringing poetry, which has been inspiring generations since.

His poem on Veer Shivaji consists of 190 lines.

It was serialised in the magazine India in the year 1906 in four issues from the middle of November to early December.

The last part came in the magazine dated 6 December 1906, with a 'to be continued' announcement but it was not continued for some reason.

In this poem, Bharathi shows Shivaji giving an inspiring and motivating talk to his troops.

At the outset Shivaji points out that when in her pristine glory, Mother India would not even tolerate the feet of aggressors who despise the Vedas. Alas what had we become!

And by inserting Vande Mataram, the chant of the resurgent India most feared by anti-India forces then and 'Breaking India' forces now, the poem transcends historical time.

Then, Shivaji describes the glories of Bharat—geological, geographical, natural, civilisational and spiritual.

'This is the land of Himalayas and surrounded on three sides by the ocean.

This land is rich with fruits and streams.

This is the land of sacred perennial rivers.

This is the land where women who do not bear valorous children consider themselves as having no children at all.

This land is the very embodiment of Dharma. Dharma itself is this land.

Devas live here. Seers and seekers world over reach this land with insatiable thirst for enlightenment. This is the land of true gnosis.

Who am I to even state the greatness of this land!'

Each stanza here ends with the exhortation: ‘Such a great nation thou art the children of: never dare you forget this even for a second!’

Then, the atrocities of the foreign rule are enlisted in a moving way.

Such a great land is today ravaged by the invaders. They had managed to capture power. They are destroying our valour. They are rapacious.

They demolish our temples; disparage our sacred texts;
They are killing the helpless-children, old people and the cows
They are raping our women and harming the Vedic sacrifices
Our indigenous knowledge they demean and destroy.

They are denying our basic human dignity. They are making our heroic youth submissive serfs. Oh! We the Aryans have become the slaves of the lowly aggressors!

Here the term 'Aryan' is used in the traditional Indian meaning of noble and not in ethnic terms (Bharathi has written an entire essay on what the term ‘Arya’ really means, condemning the Aryan race theory).

Then, Shivaji tells his army men that they are free to choose to fight. It is not compulsory. Those who want to desert the battle can do so.

'Even as one’s brethren get destroyed by the foreigners, those who desire to lead a happy family life can get out of the army.

As the nation goes to the alien rulers, with no thought of that, if one wants to retire into the comfort of his own house, let him leave the army and go.

As the nation suffers and decays, he who thinks of his own children’s comfort, let that person get out of here'.

Then who should remain in the army?

Shivaji says that only those who want to fight for the Mother should remain.

And they will be showered with blessings from Sri Rama and Bhima and every hero of our national epics. Victory alone shall be the destiny for us.

Now Shivaji describes the battle that awaits the soldiers of Mother Bhavani.

'If we win then we liberate our Mother and if we die then we attain the fame-filled heaven that awaits only the heroes. And this is not just war. This is verily yajna itself'.

Killing the sheep and goats a few perform sacrifice for Moksha.
But pouring out our very heart’s blood and Motherland as our yajna vedi
We do this yajna – the Yajna that annihilates the evil suppressor
Can there be a yajna greater than this?

Shivaji describes the Kurukshetra scene of depressed Arjuna and the clarion call of Sri Krishna to make Arjuna fight.

Even if your relatives are there against you, you have to fight and make their bodies the feed of the earth.

'It is your great tapas that you are lucky to have made the choice of fighting for Dharma today in this land of Vijaya and remember (unlike for Arjuna who had to fight his own brethren for Dharma), you have to fight the foreigners who are alien to you in every respect!'

'They not only are foreigners, they give scant regard to our own greatness and they rule over us!'

It is clear if one reads the poem that the Mughals morph into the British.

The passionate appeal to the soldiers of Shivaji is actually to the youths of then Madras.

All the atrocities that British did, including emasculating our civilisational spine through their education as well as evangelist onslaught on Hindu society are implied in the address of Shivaji to his soldiers.

There was also a class of educated Indians who were satisfied with their career, their salaried government jobs and considered the participation in the freedom movement a dangerous, self-destructive venture.

When Bharathi's Shivaji asks the selfish and the weak to get out of the army, the target was this educated class of Indians.

Thus, the poem sees Shivaji as the symbol of an awakened new India.

They should make sacrifices and fight. It is their sacred duty and chosen destiny.

Blessed are such chosen soldiers of Mother India and to them ever eternal is the arousing call to the battle filed - in whatever domain it is.

Why did Bharathi, a Tamil poet, have such love for Shivaji?

There are historical reasons.

He was aware of the nascent slave trade that was beginning to be developed by the European trade-military lobbies.

He had warned the Europeans sternly of indulging in slave trade of any sort.

The earlier Islamic rulers had given the concession of slave trade to select European companies. Shivaji would have none of this. He decreed:

Under the Moorish government it had remained lawful for you to buy and transport from here men and women slaves without hindrance from anyone. But now, so long as I am master of these lands, you should not buy or transport any men or women as slaves. And if you happen to do so and convey them to neighbouring lands, my people will set themselves against it, hinder it in all manner of ways, and will not allow of their being brought back to your factory; this must you observe and fulfil in the prescribed manner.

This instruction is with respect to the Dutch establishing trading posts at Porto Novo (Parangipettai, Cuddalore district), Tevenapatam and Puducherry. All these are Tamil provinces.

In effect, it is clear that the European powers could not indulge in large-scale slave trade, as they did elsewhere, because of the fear of the Marathas, and due to the explicit decree of Veer Shivaji.

Shivaji had consciously saved the Tamil people from a humiliating misery that would have befallen on them.

Transcending language differences and even barriers of sovereignty as of then, Shivaji Maharaj could see the barbarism and inhumanity of slave trade and protected his people, irrespective of what language they spoke or under whose rule they lived.

Such prohibitions of slave trade would arise in the West only in the nineteenth century.

By the mid-17th century, the British were establishing themselves as a power in Madras. They had erected the St. George Fort.

In this fort area was a goddess temple. The name of the goddess is Kaligambal. Fortunately, it was not destroyed.

The merchant community got it shifted to another place in Chennai.

Shivaji was monitoring this situation amidst rumours that he would invade Madras.

Just three years before his untimely death, on 3 October 1677, Shivaji Maharaj is said to have visited Madras surreptitiously and have a special darshan at the Kaligambal Temple.

Is it possible that his worship, offered at a temple relocated from St. George, was an indicator of his plans to liberate southern India from the British encroachment? We can only guess.

When Bharathi worked in the magazine Swadesamitran, it is said that he used to come and worship at Kaligambal and his famous Kali Stotra is said to have come from his devotion to this Goddess:

All that is, is Kali You! Permeating all You!
Actions beneficial and harmful Your deeds all!
Enough had I of the falsity people live in
Primordial Goddess You protect me with your Arul

No wonder Bharathi could see Chhatrapati Veer Shivaji for what he really was, his Viswarupa, the chosen warrior of the Mother whose vision is all things good in today’s India.