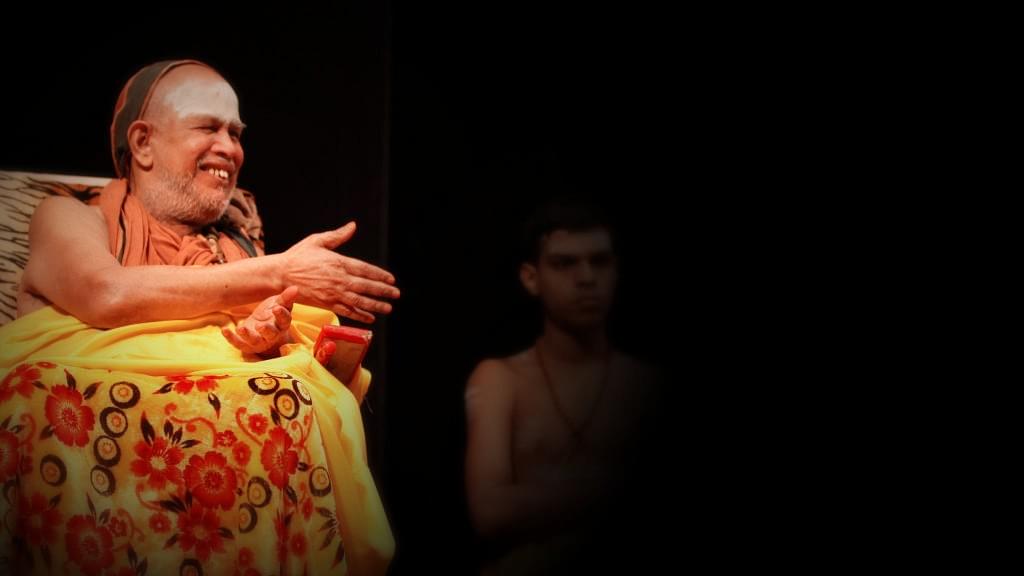 The Shankaracharya of Kanchi (Sattish Bate/Hindustan Times via Getty Images)

My earliest memory of Sri Jayendra Saraswathi was when he visited our town soon after the Mandaikaadu riots of 1982. Hindus of Kanyakumari district were living under fear and a sense of siege. Whenever the church bell tolled the mobs would assemble and begin a systematic attack on Hindu villages. This itself was preceded by years of hate propaganda against Hindus and attempts to change the names of villages and towns. Christian clergy conducted themselves almost like extra-constitutional rulers. There was even an attempt to change the name of Kanyakumari into Kanni Mary (Virgin Mary). Almost no traditional Hindu head came to the rescue of the Hindus. Kundrakudi Adigal - an Adheenam close to Dravidianists came and visited the church officials and in the name of peace spoke almost like the spokesperson for the Christians. He even refused to hear the grievances of the Hindus.

It was at this time that Sri Jayendra Saraswathi, then junior pontiff of Kanchi mutt, came to our district. He visited the distraught Hindus who were almost refugees in their own district. He talked for hours with them. He talked with various Hindu community leaders - most of them were not Brahmins. But the significance of those things never registered then. What we felt as Hindus then was that we were not left alone to the predatory elements of a foreign-funded aggression but that we have seers who would come and stand by us. Since then under his guidance Kanchi mutt assisted many Hindu activities in the district. To us, in Kanyakumari district, Sri Jayendra Saraswathi became a beacon of Hindu solidarity. As I grew up, I started understanding that the Advaita of Sri Ramakrishna-Vivekananda tradition as well as the Hindutva of Deoras cannot exactly be comfortable with the worldview of Kanchi mutt.

Yet, Sri Jayendra Saraswathi will always be a critically revered figure in the heart of an average Hindu in Kanyakumari district who grew up in the 70s and 80s - not for his perceived or real failures but for his courageous attempts to create an all embracing Hindu view. He stood by us when entire array of traditional Hindu pontiffs kept silent. How much he succeeded in his endeavour to create a pan-Hindu fraternity, time will tell.

Whether the charges against him were conspiracy of the missionaries or political vendetta of an egoistic ruler and a mud slinging media filled with anti-Brahmin hatred, or true - the future generations will know. Just to sample one such hateful propaganda against the seer. There is a photo meme showing the Union Minister Pon Radhakrishnan sitting on the floor in front of the seer. And the accompanying propaganda lines of the memes say that a Sudra even if a minister should sit on the floor in front of a Brahmin. At the same time, there is a video which shows the maestro Illayaraja and the seer both sitting in the chairs and the maestro singing a song with a visibly moved seer. The meme creators represent the popular misconception that if a person sits before a revered figure then that is because of caste. The video exposes the hateful-lie of the meme-mindset of Tami Nadu.

After 2004 he was easily the most vilified person in the media history of Tamil Nadu. Anyone could write anything about him. This is in a state where even a known forest smuggler, murderer and poacher could not be called a criminal without facing abuses from certain political circles. There were allegations and accusations against him of all sorts. If true, then he had failed in the ethical dimension, and if the accusations are false, a great injustice has been done to him.

But now as he has moved into the great silence, let us remember Sri Jayendra Saraswathi for his attempts to reach out to the scheduled communities in Tamil Nadu and abroad. He was ready for course correction too - something really brave in the orthodox circles in which he moved. The previous pontiff had strongly opposed the entry of Scheduled Communities into the temples including those in Madras and Kerala, following the Pune accord between Gandhi and Ambedkar. But decades after, it was Sri Jayendra Saraswathy who issued certificates to trained priests of Sri Tantra Vidyapeetham, who hailed from all communities for Kerala temples. If today in Kerala we find priests from all communities without the discrimination of birth in Hindu temples, let it be known that Sri Jayendra Saraswathi has contributed to it more than the state’s Chief Minister Pinarayi Vijayan. Long before Dalit Indian Chamber of Commerce and Industry (DICCI), Sri Jayendra Saraswathi envisioned a programme for entrepreneurial development as a means to social harmony. How much effectively the vested interests around him would have allowed him to function in these kind of innovative lines is anybody's guess. But at least he dared to think and make the crucial first move in this direction.

Today, Kanchi mutt is at the crossroads. Sri Chandrasekara Saraswathi showed the world how a seer should be in his personal life. Even those who could never accept his social views, held him in high reverence for his transparent and simple life which even seemed humanly impossible. Sri Jayendra Saraswathi showed courage to move out of the restricting social view of the mutt. It was a very bold and even dangerous move. He got himself into the web of deceit filled with back-stabbings, betrayal and power mongers and manipulators. But this too should be taken as a phase in the growth of a Hindu traditional institution into modernity. His suffering and pain should be translated into lessons for the next pontiff.