Tarring Hindutva With The Oak Brush 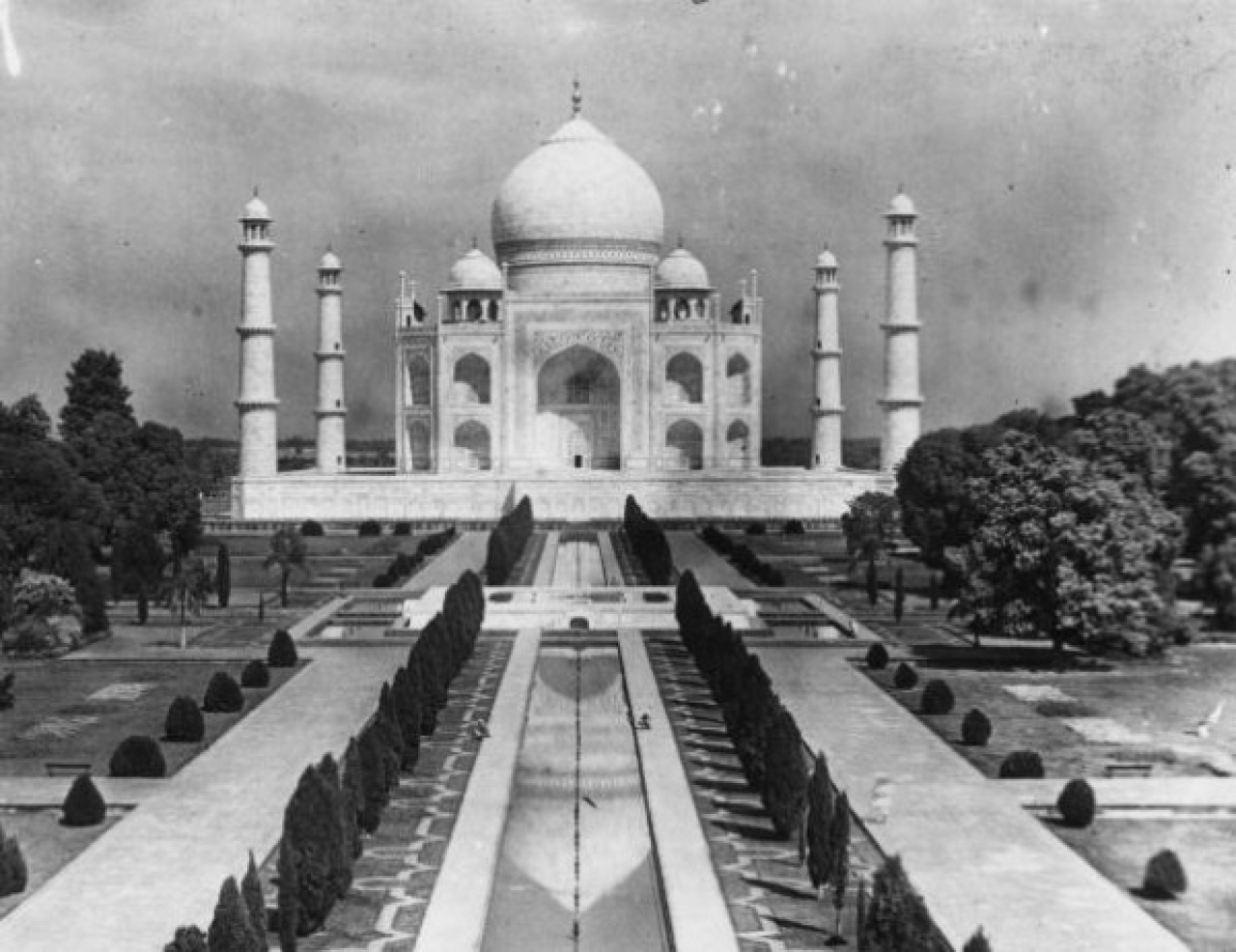 One of Open magazine’s contributors co-wrote a rather long article with author Roderick Matthews for the monthly. It was titled ‘Oak’s Folks’. The article is a long essay against an easy target – the ‘history’ writings of Purushottam Nagesh Oak (1917-2007), an officer in the rebel army of Subhas Chandra Bose.

Oak believed in an ancient Hindu world. He obsessively traced the roots of every ancient civilisation to Vedic India. He is popularly known across the country for the claim that the Taj Mahal was originally a Hindu temple. When I was a child, in the 1970s, I remember reading Oak’s claim on the Taj Mahal in Tamil. It was translated and serialised in a popular Tamil weekly called Kumudham. However, the magazine was not run by the proponents of Hindutva. On the contrary, the editor and owner of the magazine were anti-Hindutva and pro-Congress. It was among the magazines that staunchly supported the Emergency. 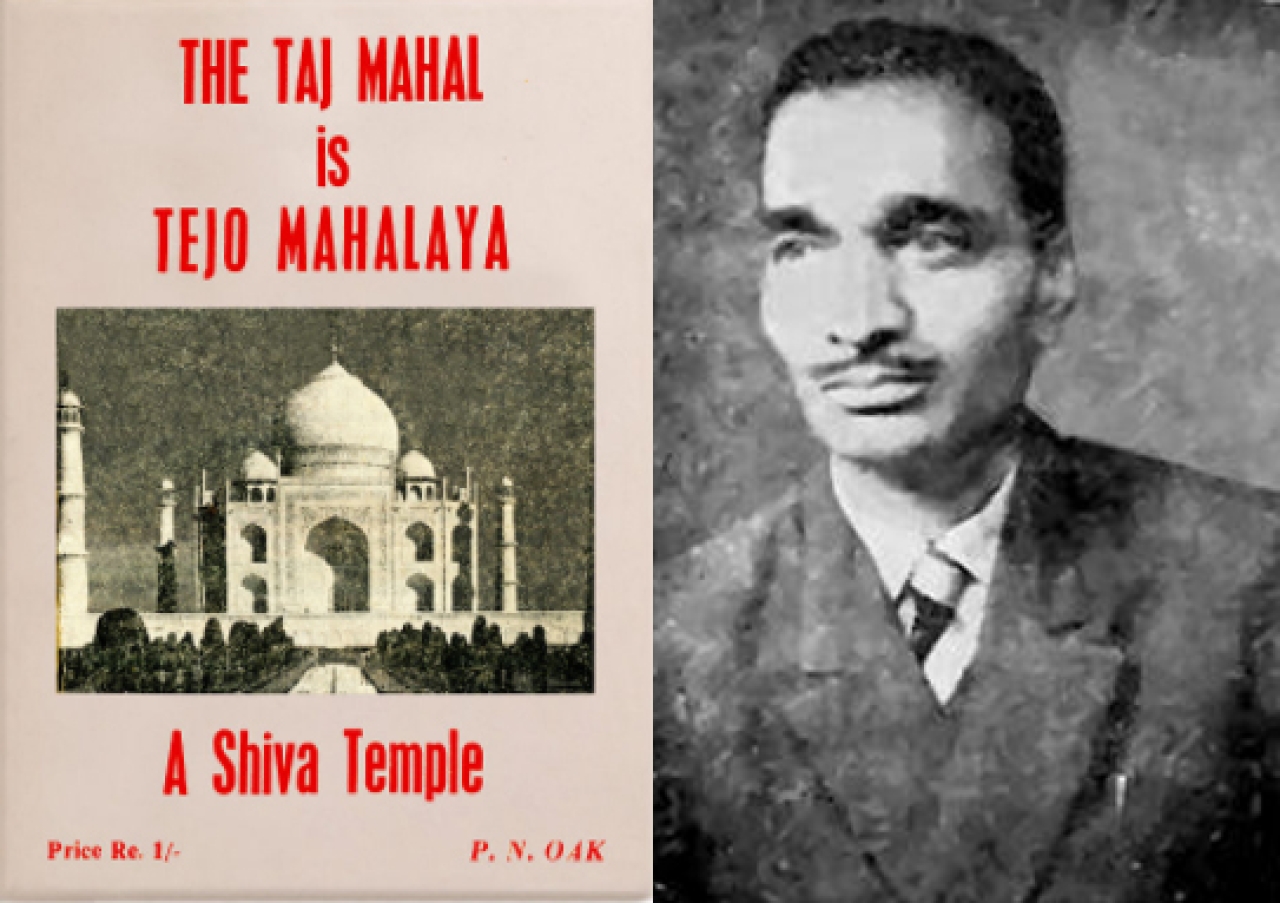 P N Oak and his notorious claim – the Taj Mahal was a Hindu temple.

Now, with the advent of digital connectivity and the rage of memes, the outlandish claims of Oak have made a comeback. So, when the article’s co-author Matthews makes an attack on Oak and points out all the blunders in his arguments for the world wide web of Vedic civilisational network, he should be more than welcome. However, where Matthews goes overboard is when he claims that it was the works of the likes of Oak that are at the very basis of Hindutva. Matthews writes:

There is now a large body of literature from, among others, VS Godbole, Paramesh Choudhury, NS Rajaram, S Talageri, François Gautier, Stephen Knapp and David Frawley, all of whom generally concur with Oak about the primacy of Hindu science and culture in the ancient world. ... The theory of ancient Vedic hegemony has no claim to serious consideration within modern cultural and political debates. But it lies at the ideological root of the entire Hindutva project, its claims to exclusive proprietorship of India, and its claims to superiority over all other world cultures.

This extrapolation is not only completely unwarranted but also intentionally mischievous. Matthews writes about the general Hindu disdain for “established academics” whom Hindus have often “accused of twisting their conclusions”, and links this to the disdain Oak and his followers had for mainstream academics. This is an age-old political technique – caricaturing the ideological other with the worst crackpots on their side and then essentialise the ‘other’ as the same. In reality, Hindutvaites have a much stronger case to categorise leftist historians as Stalinists and Lysenko-breeders.

Consider, for example, the way Matthews starts his article:

The movement first appeared towards the end of the 19th century and was closely associated with the rise of the Arya Samaj, whose founder, Dayananda Saraswati, believed not only in the literal truth of ancient Sanskrit texts, but also in their comprehensive scope. All that was in the Vedas was true, and all truth was in the Vedas, he taught. Much promotion of ‘Vedic science’ followed, as a nationalist pushback; ‘Hindu chemistry’ was pitched into the ring against Western intellectual supremacism, typified by Lord Curzon’s complacent claim that the highest ideal of truth was ‘to a large extent a western conception’.

Then he goes on to speak about the ‘Unified Field Theory of History’ that Oak was working on, and claims:

This unified theory includes the belief that the Mahabharata War was a real struggle for global hegemony, which took place in 5561 BCE, and involved advanced weaponry, such as nuclear bombs and flying machines, which Oak insists were all products of Vedic science.

In fact, these two quotes exemplify the intentional confusion of Matthews’s argument. The ‘Hindu Chemistry’ he speaks about is in a tangential reference to the voluminous A History of Hindu Chemistry (1903) by noted scientist and Indian nationalist, Acharya Prafulla Chandra Ray (1861-1944). 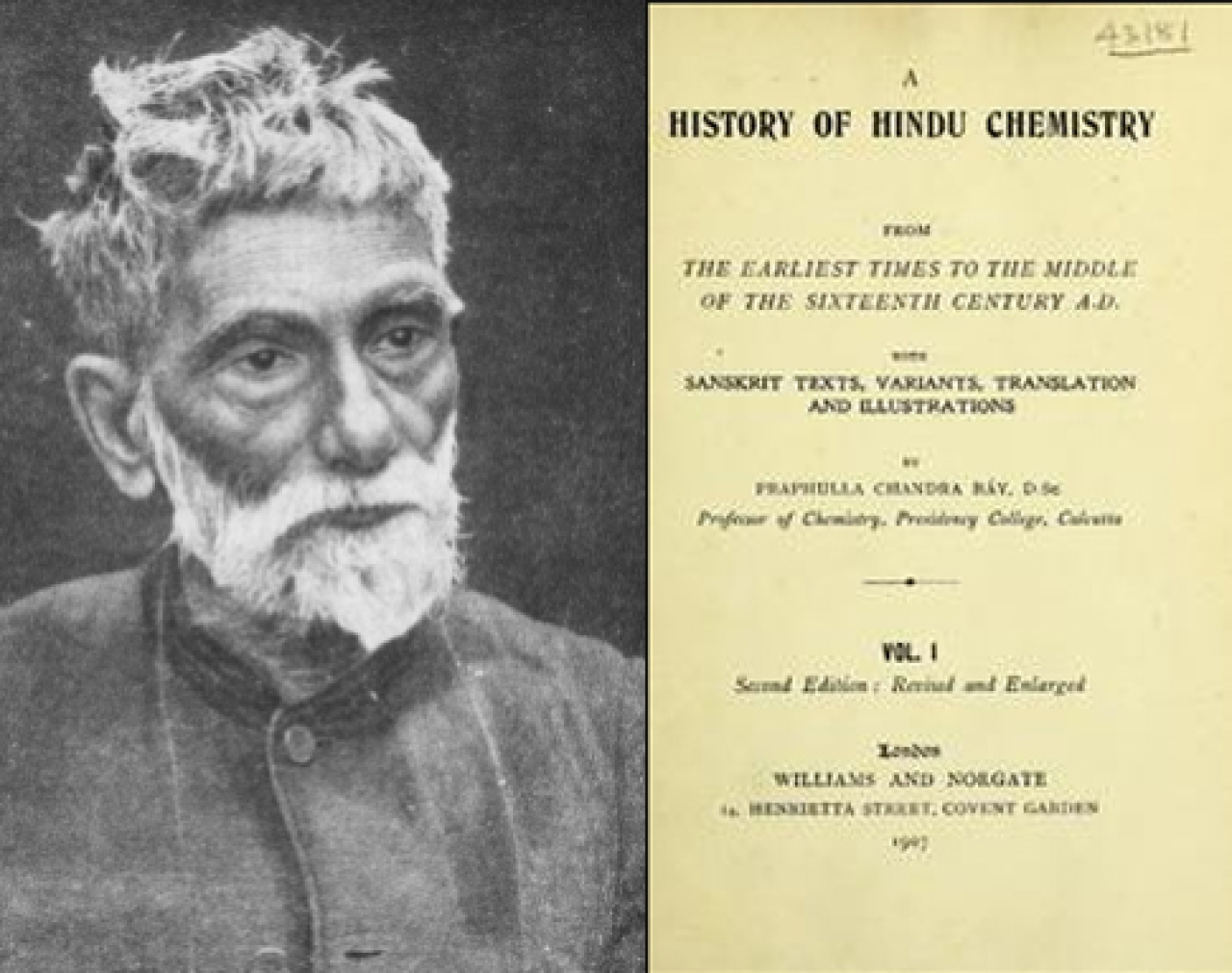 Acharya P C Ray and his book on Hindu Chemistry

Now, the book is more than a century old. Even then, Ray had actually criticised the attempts made to draw a parallel between ancient literary descriptions of weapons and the then prevalent modern technologies.

In Sanskrit literature, there are frequent but vague references to ‘agni astra’ or firearms, but we have no reason to suppose that the combustible matter these firearms contained supplied a motive power of the nature of the gunpowder. The fire missiles were probably of the same category as the flax, resin, naphtha or other bituminous substances discharged from bows…But there is nothing to show that gunpowder of any sort was in use or any chemical which would act as a propelling agent.

So, to link an academic treatise like Hindu Chemistry to the extravagant claims of the likes of Oak is more than ridiculous – it is blatant dishonesty. The idea of ancients having modern technologies is today spearheaded in a commercial way by the Western History channel’s ‘Ancient Alien’ series and taken up by gullible enthusiasts the world over. It is part of the larger problem faced by serious scholars throughout the world and is not specific to Hindus. 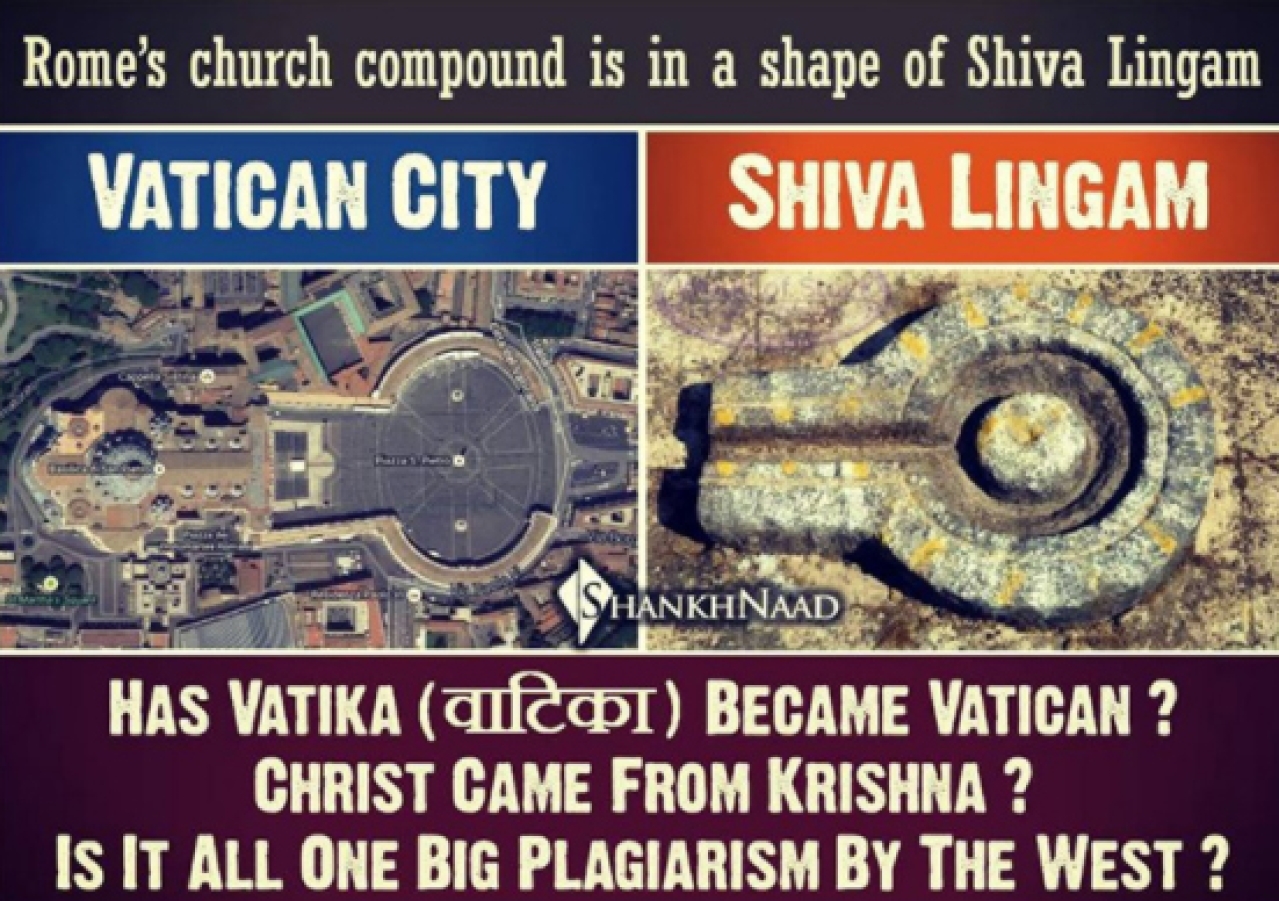 Coming to modern Hindutva historiography itself, it is not Oak that the Hindutva side relied upon for their archaeological claims in Ayodhya. Dr B B Lal and Dr S P Gupta are considered as among the finest archaeologists in the academic world. One of the tallest historians on the Hindutva side was Sita Ram Goel (1921-2003), who should be considered as the progenitor of modern Hindutva history writers, both academic and polemic, like N S Rajaram, Shrikant Talageri and David Frawley. Not to mention that Goel was the inspiration for Dr Koenraad Elst, the Belgian Indologist, whose academic rigour and secular humanist approach should make a believer of any kind uncomfortable. Goel himself was extremely critical of Oak. Hindutva writer Surinder Paul Attri as well as Dr Elst have recorded repeatedly their disdain with which Goel confronted Oak. Goel called Oak “the greatest disaster for Hindu scholarship”. He seemed to have realised early how the anti-Hindutvaites could use Oak to essentialise and hence rubbish entire Hindu scholarship.

Elst has come out with many articles cautioning Hindus against getting allured by the claims of Oak. So Matthews has carefully left out Elst. But even with the other names, he is again misleadingly wrong. For example, he lists Talageri as ascribing to Oak’s claim of a Vedic world empire. Leave alone the world, even for the Indian population Talageri does not consider a Vedic ‘Aryan’ origin. The ‘Vedic Aryans’ according to Talageri were “one section among these Purus, who called themselves Bharatas” (Talageri, 2000).

Today, the Marxist historians, who are the “established academics” and have had a Stalinist stranglehold on academic institutions in India, are under intense criticism. In his revelation, Dr K K Muhammed, the former director of Archaeological Survey of India, had exposed how Marxist historians lied to the nation about the temple in Ramjanmabhoomi, thus misleading the Muslims, resulting in widespread riots and bloodshed.

On the other hand, Hindutva historiography has produced some original research work on Indian history. It should be noted that it was not Oak’s book on the Taj Mahal or Vedic world empire that are promoted by Hindutva followers, but the works of Dharampal – a Gandhian historian who brought fresh insights into how the traditional Indian education system worked as late as seventeenth century. His data goes against the entrenched Euro-centric colonial-Marxist myth of education being brought to India by the colonial-evangelical enterprise.

It was Hindu nationalist historian Goel who first published the work of Dharampal on the history of traditional Indian education system – now a historical classic, The Beautiful Tree. Similarly, the National Democratic Alliance-I government, under Vajpayee, commissioned Dharampal and not Oak to write Indian history. Sandhya Jain’s book on tribal Hindu continuity is another scholarly forerunner providing fresh Indic frameworks to approach the tribal anthropology in India against the colonial framework rooted in the Aryan/non-Aryan binary.

Indic historians like Dharampal, Goel, Meenakshi Jain, Nagaswamy and Talageri represent a formidable challenge to the Marxist historians who have so far survived more because of the stranglehold they have had on state institutions than on the merit of their scholarship. So what is a better way of rubbishing a worthy enemy when you know you cannot face the enemy purely on merit? Caricature the enemy with the crackpots.

That said, there is indeed an interesting aside. Scholars have seen remarkable similarities between the sacred Dreamtime concept of Australian aborigines and Hindu spiritual traditions linked to sacred geography. Many natural spiritual traditions of African and native American nations do resonate with Indic spirituality. While Oak and his net-acolytes are definitely wrong in claiming a Hindu or Vedic origin for all world cultures, the similarities between the native spiritual traditions worldwide and Hinduism may come from the fact that they are all natural religions which are rooted to the soil and inner space rather than relying exclusively on celestial divines, descending revelation and linear time. Hindu spirituality is the only remaining non-monotheistic natural religion that validates other spiritual traditions. It does not oppose Christianity and Islam as such, but opposes their expansionism. Hindu spirituality, and therefore Hindutva, is not even opposed to monotheism. Judaism is the natural monotheist religion as opposed to Christianity, Islam and Marxism, which are expansionist monocultures. It is a valued civilisational and historical ally of Hinduism for thousands of years with mutual respect for their differences.

At the foundation of Hindutva is not the fantasy world of Oak but some seminal path-breaking works of scholars like Goel,  Dharampal, Sandhya Jain, Jitendra Bajaj. And the list is growing.

So, Hindutva has rightfully relegated the fantasy of ancient Vedic global empire to the dustbin and moved on. Indic historiography has produced Dharampal, Goel, Jain, Bajaj and Nagaswamy. But if leftists want to get stuck with crackpots like Oak and try to define Hindutva scholarship through his work, then what does that make of these ‘scholars’ – Oaks of their kind?