The Banaras Ghats They Are A-Changin’ 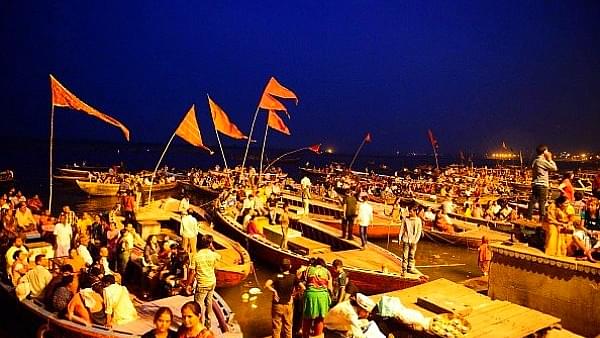 If you are a first-time visitor to Varanasi, there is a good chance you will be utterly disappointed and even deeply disillusioned. India’s holiest city is also the most chaotic and noisiest. It’s one big mess that, at first glance, looks irredeemable.

But like most of India, Varanasi reveals itself slowly. A boat ride along the ghats and the mesmerising sights and sounds of the Ganga aarti rejuvenate you and prepare you for another day. One wonders if this is how the residents carry on as usual and are able to simply laugh away the city’s many woes. The one thing they love to joke about to distraught visitors is that it was back in the 1970s that the city saw “development”, when the railway station came up.

Banter apart, the locals admit that things are moving again. Since Narendra Modi was elected Member of Parliament from here, the city has been abuzz with development activities. Toilets and dustbins have found space in every nook and corner, new roads and bridges have come up, and the railway station looks cleaner.

Depending on who you ask, the changes are either cosmetic or life-changing, moving at snail’s pace or running briskly. But things are certainly moving. One Amrit baba, a Puducherry native who has made Varanasi’s Assi Ghat his home these days, testifies to this “change”, as he notes, “In Kashi, things are moving, thanks to Modi. In India, things moving is good enough.”

“The government is spending quite a lot of money. They didn’t even have toilets here. That was a big issue which has been solved now,” he said.

Sulabh International has built a large complex with toilet and bathing facilities. The non-governmental organisation now maintains the ghats. It played a significant role in beautifying and renovating Assi ghat and was instrumental in cleaning steps where mud and slit were accumulating for decades. Prime Minister Narendra Modi has also lauded the efforts of Sulabh.

Sitting under a giant tree at Assi ghat with an idol of goddess Lakshmi beside him, Amrit baba is engrossed in a smartphone that he received newly as a gift, scrolling and checking out old photographs and smiling. Every now and then, he looks up and answers our questions.

“We sadhus could do with some charging stations. Please take my request to Modi,” he says.

Amrit baba is an Anglo-Indian, born to a Punjabi mother and English father. He considers Aurobindo his philosophical and spiritual guru and has been visiting Kashi for several decades now. He first visited the holy city 40 years ago, but returned often.

Around 10 years ago, he decided to make Varanasi his permanent home. But the baba isn't too happy with the way the city has evolved. “The water level (in the Ganga) today is very low. Until about four to five years ago, it used to be quite good,” he tells us. “Ganga is in danger. It is going the way of Saraswati,” he says.

One of the sights to behold in Kashi is that of a sadhu in saffron robes and a flowing beard, forehead smeared with ash, quietly gazing at the Ganga in the lovely colours of dusk. Tourists come from faraway lands to capture this sight on their cameras, but the sadhus have things to share and suggestions to make that largely go unheard.

“You see the garbage in the Ganga? It is there because we have turned the Ganga into a picnic spot,” says one baba at Dasaswamedh ghat, who introduces himself as Naresh and is a grihastha (family man) sadhu. A resident of Varanasi since birth, he took sannyaasa along with his wife after “fulfilling all the worldly duties” and has been living in a grihastha ashram for three decades.

The baba has seen the Ganga and the ghats evolve over the years, for the worse.

“Earlier, we used to go all the way up to the houses to have a cup of tea. Now, tea sellers have come up to the steps. They even serve it during the Ganga aarti, both to the people watching from the ghat as well as those on the boats. Where do these cups go?”

“These sellers take no responsibility for the trash they generate. They don’t move around with bins. So people simply throw the empty cups in the river,” he says, visibly angered.

Another reason he cites for the accumulation of waste in the Ganga is the weakening of the river’s flow in the last few years. “Look at the Ganga. It’s stagnant. It’s because of Tehri dam. The BJP is more interested in making electricity than releasing water in the Ganga,” he says.

"Pehle phool-patte sab paani mein beh jaate the (Earlier, flowers and leaves would go away with the flow),” he says.

The baba laments that the so-called “Hindu-nationalist” government is ignoring the real Hindu causes. “They want to increase the number of tourists here. They are interested in business. But they don’t care about people like us.”

“Sannyasis like me don’t have to necessarily go to the Himalayas and live in caves. We come to Kashi to get moksha (liberation). It’s my good fortune that I’m spending my last days so close to the Ganga. But nobody cares what we want,” he says.

Opinion is divided among sadhus on how they want to see the sacred Ganga years down the line. While most ascetics echoed similar sentiments as Naresh and objected to the ghats becoming “picnic spots”, others like Amrit baba differed.

“What’s wrong with a picnic?” he asks.

“In Egypt, they have great cruises that take one down the Nile river. It’s a great experience. They have parties on the cruise. Ditto for rivers in European countries. Why can’t India have something like that?” he asks.

“Modi is right in starting the waterways project to transport cargo and people via India’s rivers. But first, you have to fix the water level. It’s too low.”

Close by, at a small Shiva temple on Assi ghat, one Takeshwar baba is largely pleased with the renovation of the ghats under the Modi government. Pointing to workers chiseling away at big stone slabs on the ghat, he says, “Beautification work is on. They are trying to make the ghat more attractive for visitors. They have installed lights. It’s no longer dark after sunset,” he says.

He is pleased with the new concrete floors and slabs leading to the ghat. “When I came here many years ago, it was all muddy. But things have improved a lot in these four years.”

He points towards a stage with a hoarding that says ‘Subah-e-Banaras’, where the baba says artists perform in the wee hours every day. This initiative was taken in late 2014 and draws crowds.

However, Tarkeshwar baba has a complaint, echoed by several others – that of the weakening of the river’s flow, “because of that big dam in Uttarakhand”.

He has another complaint that he wishes we take to Sulabh – their newly built toilets close at 10pm. “Where do we go in the night? The toilets must be operational 24x7.”

Even the locals involved in small businesses and jobs admit to a change on the ghats.

One Pandit Narayan Choubey, who often visits a small temple on Assi ghat adjacent to the newly constructed Sulabh complex, says “a lot of work has happened on the ghats as well as in the city”.

“Modiji ki kripa hai, unhone bahut kaam karvaya hai (All thanks to Modi, he has got a lot of work done),” he says. The biggest change, he says, is on the cleanliness front.
We tell him about our “terrible” experience with the city as first-timers – the incessant honking, the maddening traffic, the poor civic management, the open drains, the stray animals, and of course, the stench.

“Let me correct you,” says Chawan. “The situation was much worse before 2014. Ask anybody.”

“This city doesn't have a proper drainage and sewerage system. It's a long-pending issue and we know it'll take a long time (to fix it),” he says. “Ye majboori hai yahan ki (It's a helpless situation). All the waste of the city is discharged in the river. Since the flow is not what it used to be, garbage keeps floating here. It spoils the beauty and pollutes the holy river,” he says.

Choubey doesn't know much about Tehri dam, but tells us that the “the flow has definitely been declining”.

“I think we must take into account the weakening monsoon too. Rains are not what they used to be,” he says.

He blames locals and their civic sense for much of Varanasi's problems, but expresses his satisfaction with the government. “Every good effort you see regarding cleanliness is because of the government and not the locals. The latter would only add to the garbage if they could.”

But are these efforts enough? “There are two kinds of people in the world – grateful and ungrateful. We should try to be the former,” Choubey says.

“We don’t say thank you enough when someone does good work. We should say it more often. This way we can encourage them to do better work.”