The Era Of  The 18 Jyotisha Siddhantas 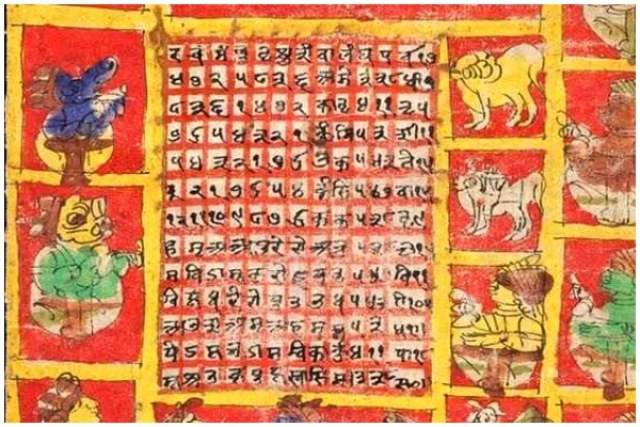 This was the era of the composition of most of the Vedaangas, the creation of such seminal works like Bharata’s NaatyaShaastra, Chanakya’s ArthaShaastra, Vatsyayana’s Kaama Sutra, and several magnificent treatises on various subjects.

Among these were the 18 Jyotisha Siddhantas, all attributed to devas like Surya or rishis like Kashyapa, Atri, Mareechi and a host of others as described in this sloka:

This stands in stark contrast with the Siddhantas in the post-Aryabhata classical era, all of which are ascribed to scholarly astronomers, but not rishis. Varahamihira’s phrase manuja-grantham, succinctly describes this.

This was the period during which numerals, the place value system, angular units like degrees, minutes and seconds, trigonometry, and several such mathematical concepts must have been discovered.

But all the siddhantas are now lost, except for the Surya Siddhanta, which was modified and updated in the later centuries.

Fortunately for us, Varahamihira — a contemporary of Aryabhata — wrote a treatise called Pancha Siddhantika, a comparative study of five of these 18 Siddhantas. He has quoted and explained several verses from them. And so, we understand at least some of the concepts of that era.

For practical use, compact books called karanas were composed. These were used by pandits to prepare almanacs/calendars called panchaangas for public use. This latter tradition is still extant.

It is my belief that these various texts on astronomy and mathematics rivalled the commentaries and compositions on the Ramayana and Mahabharata; so rich and so widespread was the literature.

The five siddhantas that Varahamihira studied, those of Pitamaha (Brahma), Vashishta, Surya, Romaka and Paulisha, explain motions of planets (in a geocentric model), prediction of eclipses, sine tables, and celestial longitudes and latitudes.

None of these are mentioned under Vedanga Jyotisha. They vary mostly in minor details, which Varahamihira explains. The small Vedic yuga of five years was dropped, and the humongous yuga of 4,32,000 years was used.

We have no idea when or how this changed. A day count, ahargana, counting the number of solar days (regardless of month or year) since the start of the Kaliyuga, which began when the Mahabharata war ended, came into vogue.

Kaliyuga years are found inscribed in several royal inscriptions; for example, the Anamalai inscription of Maranjadayan Varaguna Pandyan in Madurai.

Romaka (also called Lomasha) and Yavana refer to a Roman and a Greek, and Paulisha to a Paulus Alexandrinus, say historians of science. While some foreign ideas were obviously borrowed, there is a puzzling absence of inclusion of other ideas, including those of Euclid, Ptolemy, or Archimedes.

Whereas the Greeks developed an epicyclic theory of planetary motion, Indians developed a theory based on air strings pulling the planets. Geometrically, these are simply epicyclic models that are different from those used by the Greeks.

They involved extremely complicated geometry, trigonometry and algebra, but they were quite accurate in predicting eclipses — solar and lunar — which were the biggest challenges of Indian astronomy.

That Mercury and Venus had a different type of orbital movement from the other planets like Mars, Jupiter, and Saturn, was realized. The Siddhantas explain eight types of planetary movement.

A vocabulary of scientific and technical words was developed, to describe both such astronomical concepts and mathematical ideas and theorems.

From the earlier knowledge of hypotenuses and circles, as found in the Sulba Sutras, we can understand that the concepts of sine, cosine and other trigonometric ideas arose.

The Indian sine was not the opposite/hypotenuse that we learn in school today, but the radial sine (abbreviated as R-sine), called the ardha-jyaa (half-bowstring). A chord connecting the ends of an arc looks like a bow (Sanskrit: chaapa or dhanush).

When seen as part of a circle, the radius of the circle (CM) is the hypotenuse of the triangle (CMA) formed by the half-chord (MA), the radius touching the top (M) of this chord, and the segment (CA) of the radius dividing the chord into two equal halves.

In Indian Siddhantas, in the table of sines, expressed as a series, only the numerators are listed. Hence they are radial sines (multiplied by radius). The word for cosine is koti-jyaa.

The word jyaa and this concept of trigonometry traveled from India to Baghdad in the eighth century during the regin of Caliph al-Mamun, along with the zero, the decimal place value system, Indian numerals (now called Arabic numerals) and the works of Aryabhata and Brahmagupta.

The word jyaa transformed into the Arabic word jyaab or jeyb, which means pocket. This then was taken to Europe by Leonardo Fibonacci, an Italian merchant, in the twelfth century, and translated into Latin as sinus, and later into English as sine.

Then it came to India under English colonialism, making a full circle (pardon the pun) into our mathematical textbooks as sine. We learn trigonometry as the gift of the Europeans, not realizing its Indian origin.

Angular measurements called kalaa (degrees) liptaa (minutes) and viliptaa (seconds), were used, based on the sexagesimal system (Base-60) rather than decimal, which hints at a Babylonian origin.

In addition, a subdivision of the second into sixty parts and division of the circle into twelve parts (called raashi) also existed. Angles were often represented in Karana texts with five aspects, not just the three we use today.

The division of time was also sexagesimal, with a day consisting of sixty naadis, each naadi of sixty vinaadis. Remember, the naadi existed in the Vedic period; was it indigenous or imported? It’s one of several mysteries.

Two millennia before the world adopted the Greenwich meridian, Indian astronomers used the Ujjain meridian, as the prime meridian of longitude in India. This is the longitude that passed from north pole (Meru) to south pole (Vadavamukha).

That the earth was a globe, not a flat plain was well understood by astronomers of this sub-continent. They believed that Devas lived at Meru and Asuras at Vadavamukha, and Mankind in between.

This was one concept of gravity, before Newton changed it.

Lanka is not the Sri Lanka we know now but the point where the Ujjain meridian intersects the equator. Ujjain was a major center of learning in ancient India and is also perhaps closest to the Tropic of Cancer (Karkata).

We don’t know what places Yamakoti and Siddhapura signify, perhaps they are also place-marker names like the equatorial Lanka.

While all the other Siddhantas determine time with Ujjain as the Prime Meridian, Romaka Siddhanta says the day starts with sunset at Yavanapura, which is not Athens or Rome but Alexandria in Egypt.

The logical thought process which inspired the use of Ujjain and Lanka for calculations is simple but brilliant.

The longitude and latitude of a place determine its local time. So, the times of sunrise, sunset, moonrise, eclipses, will vary from place to place.

Once the calculations are made for a prime meridian like Ujjain, local panchaangams could be prepared with only minor changes applied for local longitude and latitude – these are called deshantara, Each Siddhanta has a section about it.

Some trivia: Ujjain passed on its torch to Madras, briefly. Today, Indian standard time is set on longitude 82.5E, based on Greenwich meridian. But for about a century, the Madras meridian was used as the prime meridian, especially for railway clocks.