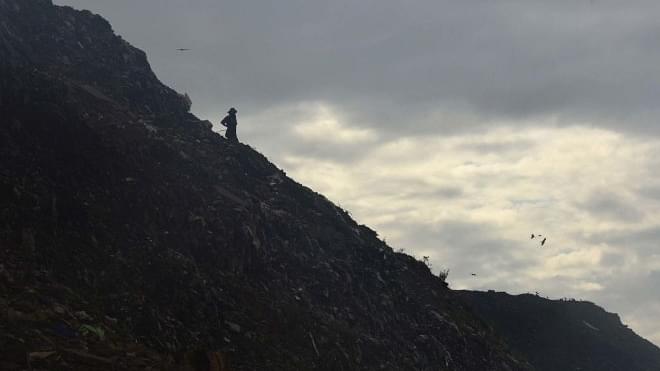 Vipin, a resident of Kingsway Camp in North Delhi, is bitter about the garbage in his area. He feels greater frustration as the waste in his area is not collected on a door-to-door basis, as the rules mandate.

“The municipal truck is supposed to come every day to collect waste, but it comes once in three to four days and sometimes once a week. So garbage keeps accumulating outside our houses and we have no option but to dump it on the street,” says Vipin, who owns and runs a shop in the area.

Elsewhere, the city’s problems are mounting due to the issue of solid waste disposal. Poor management of solid wastes is causing mosquito breeding and, in turn, resulting in the spread of vector-borne diseases. Last year, states like Delhi, Tamil Nadu, and Kerala witnessed higher cases of dengue and malaria, resulting in deaths of quite a few people. In 2017, there was an 18 per cent jump in the number of people affected by these diseases, according to the Directorate-General of Health Services.

Not just waste generation, even waste management is turning out to be an enormous problem across the country.

This is because India’s urban population is expanding at an exponential rate of 3-3.5 per cent annually. According to a report by the Centre for Science and Environment (CSE), at this rate of population growth, waste generation would increase 5 per cent every year. Another report by the Associated Chambers of Commerce and Industry of India and PricewaterhouseCoopers projects that 101 million tonnes (MT) a year of waste will be generated by 2021, 164 MT by 2031, and 436 MT by 2050. To put these numbers in perspective, we will need land the size of Delhi every year to dump this garbage.

When it comes to waste disposal, some of India’s biggest cities present a sorry state of affairs. The capital, Delhi, for example, generates 94,000 tonnes of garbage every day that are dumped at three landfill sites (Ghazipur, Bhalswa, and Okhla). The Municipal Corporation of the city is yet to draw a well-laid-out policy for recycling. Mumbai produces 8,600 tonnes of waste every day and the metropolitan city also lacks infrastructure to handle this volume. The city is again dependent on open landfills (such as Mulund and Deonar) that have turned into mountains of waste after years of dumping.

Municipal solid waste management in India falls under the jurisdiction of urban local bodies (ULBs) and is governed by Municipal Solid Waste Management Rules (MSWR). However, according to a 2013 report by the Central Pollution Control Board, majority of ULBs do not have adequate action plans for enforcement of MSWR. The report also highlights that no city in India does complete segregation of waste at dwelling units and on an average, only 70 per cent waste collection is observed, while the remaining 30 per cert is again mixed up and lost in the urban environment. Of the total waste collected, only 12.4 per cent of the waste is scientifically processed and the rest is disposed in open dumps. Let’s look at some of the dimensions to understand the problem.

All waste is not the same!

One of the major hurdles faced in the country is the lack of segregation of waste at source. There are different categories of municipal solid waste (MSW), and they are:

Lack of knowledge of the differences (or knowingly turning a blind eye to these differences) creates the first major challenge to waste management.

Let’s look at the problems and challenges faced in waste management.

1. Segregation: There is no organised and scientifically planned segregation of waste either at the household level or at the community bin. A large chunk of this activity is taken care of by manual rag pickers and such segregation takes place in an unorganised and unsafe manner. The revised SWMR 2016, however, require all waste generators to segregate the waste at source. Responsibility of generators was introduced to segregate waste into three categories – wet, dry, and hazardous waste. In addition, the generator has to pay a ‘user fee’ to the waste collector and a ‘spot fine’ for littering and non-segregation, the quantum of which is decided by the local bodies.

The implementation of these rules, however, remains limited. While the responsibility of segregating is on the generator, due to a lack of awareness, most households and commercial units rarely follow this rule.

The impact of segregation at source can be immense. Cities like Indore have achieved a near-total segregation at source, thanks to its municipality’s massive investment in creating awareness. Indore was ranked first in Swach Survekshan 2017 for being the cleanest city in India. According to Joseph Jegan, founder of kuppathotti.com, an online portal that provides doorstep collection of recyclable waste in Chennai and Pune, “segregating degradable and non-degradable wastes is the biggest challenge.” He suggests that waste generators should ideally segregate their waste into bio-degradable, non bio-degradable, and recyclables. This would make processing them much easier.

2. Transport and collection: Most of the waste collected from household or commercial units is transferred into metal or concrete communal bins. Once again, the transfer is managed by unorganised workers who collect waste door-to-door. Such bins are mostly open dumps, creating health hazards. According to Priyadharshini, the chief executive and founder of Wastewinn Recyclers Pvt Ltd, a social enterprise start-up involved in end-to-end waste management, “the first and foremost requirement of waste management is a right destination with proper infrastructure to process the generated quantity of waste. As a company the main challenge we faced was to find a space to setting up our organic waste processing unit.”

3. Reuse/recycle: This entails activities like collecting those materials from the waste, which could be gainfully retrieved and utilised for making new products. Since unsegregated waste is dumped at community bins, its optimal recycling is not possible. However, rag-pickers usually sort out and take and sell recyclable material like plastics and glass.

4. Disposal: Almost every city, town, or village follows an unscientific disposal of MSW such as open dumping and landfilling. India has over 60 landfills across cities. Unscientific dumping is one of the major causes of surface-water contamination during the monsoon and ground-water contamination due to percolation. Jegan also points out that as most of the landfills are located near cities, these areas become a source of communicable diseases to the residents. Ideally, they must be located away from the city, and only 75 per cent of the landfill types must be used to dump the wastes and the remaining 25 per cent should be kept free around the fillable area.

Delhi, for example, is home to Bhalswa and Ghazipur landfills, which are prone to fires and generate huge amounts of greenhouse gases every day. Despite orders from a panel constituted by the Delhi High Court, which recommended implementation of a policy focusing on the conversion of wastes to energy, compost, and useful by-products, no action has been taken till date and the hazardous sites continue to exist.

Potential of our waste

Landfills produce harmful greenhouse gases such as methane and carbon dioxide. Methane emission from landfills is about 13 per cent of the global methane emission and is about 818 million metric tons per annum in terms of carbon dioxide equivalent. In India, estimated methane emission is about 16 million metric carbon dioxide equivalent per annum through landfills. If this volume of waste was to be used productively, India would have been able to generate 439MW of power from combustible component and refuse-derived fuel, 72MW of electricity from landfill gas, and 5.4 million metric tons of compost for agriculture use as methane has 23 times higher global warming potential than carbon dioxide. Unfortunately, MSWR does not permit leachate recirculation in India. In addition, India lacks the infrastructure to put this waste to use. Hence, this remains an unused resource.

Similarly, the bio-degradable and organic matter from the waste can also be used to make manure which can be plugged into our agricultural sector. The waste generated in India has more organic content – about 50 per cent – as compared to the 30 per cent generated by developed countries, but once again we lose out in absence of a well-defined policy as well as infrastructure.

India is looking to develop its cities as smart cities, and one of the basic requirements for this would be to have a long-term plan for solid waste management for every city. While on one hand we need stringent policies for cities to process their waste and not landfill them, on the other it is also important for households to take up the responsibility and segregate their waste. Compost pits should be mandatory for every locality to process organic waste. Community participation has a direct bearing on efficient waste management.

While the government is doing its bit, it might not be enough till all of us adopt sustainable waste disposal practices at home. Priyadharshini, a waste management expert, while applauding the government’s efforts like the Swachh Bharat Mission, suggests adopting the 3Rs at home: reduce, reuse, recycle.