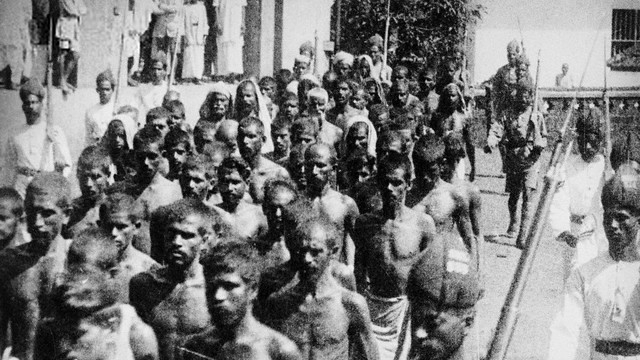 Moplah rebels captured after a battle with British colonial troops, during the 1921 Moplah Uprising.

In the Indian education system, particularly in Kerala, history teaches the 'Wagon Tragedy' next to the 'Jallianwala Bagh Massacre'. Naturally, one tends to conceive the Wagon Tragedy and its victims as part of the Indian Independence movement. There is no question that the act committed by the British against the Muslim detainees is merciless – squeezing over 90 people into a freight wagon, ultimately suffocating and killing 67 of them. Everyone knows this much of the history but not much about the events that led to this incident. We need a flashback from the Tragedy to know the truth. Those who were bundled into the wagon weren't freedom fighters; they were rioters who brutally murdered thousands of Hindus and displaced tens of thousands in the Malabar region of Keral

When I joined Janam TV, a Malayalam TV channel, I was assigned to direct a documentary series on various historic events. The first one was the 'Malabar Riots', also known as the 'Moplah Revolt' in Kerala. By the time I joined the TV channel, K P Kailasnath, a journalist, with the help of Vinod A of Vidyabhyasa Samrakshana Samiti and Tirur Dinesh of Oral History Research Foundation, did most of the research and interviewed the subjects in Malappuram district. I was given these interviews and tasked with making a four-episode documentary series on the subject. I did my research and interviewed some politicians as well. I believe that it might be the first time in Malayalam television history that the true story of the Malabar riots was being showed.

Going through the history and each of the events that occurred from August to November in 1921 is beyond the scope of this article. Although the first riot ensued in August 1921, the entire sequence of the history can be traced back to the Khilafat Movement and the final years of the First World War, when the Khalif of the Ottoman Empire was dethroned by the British. Here, I will put forward some personal accounts of the descendants of those who suffered during the Malabar riots rather than explain the whole history.

It was a four-month period in the Malabar region of Kerala when Muslim rioters conducted mass genocide against Hindus. What supposedly started as a freedom revolt against the British, ended up being an excuse to wipe out the Hindu population of northern Kerala.

The Malabar riots are seen differently by different people.

1. The Malabar riots as the Malabar rebellion, an Indian Independence movement against British colonialism. This is backed by most politicians.

2. The Malabar riots as an agricultural revolution aimed at dismantling the feudal landlords and establishing an egalitarian society. Some leftist historians and communist politicians introduced this theory.

3. The Malabar riots as a genocide against Hindus. The people who actually survived the ordeal will accept nothing other than this description of the incident. Although the Hindu community at that time in Kerala had caste system as a predicament, the Mappila rioters showed no such discrimination in murdering them. Any Hindu, be a feudal landlord or a labourer on the field, fell victim to the swords of the Mappilas. However, Mappilas didn't kill them in an instant. They would ask if the person at the edge of sword was willing to convert to Islam. Mappilas didn’t take 'no' for an answer; they would slice the throat of the victim at that very moment.

During the production of the documentary, I chose to interview Aryadan Mohammad, a senior politician of the Congress party. He was a minister at the time. What caught my attention is that in a press conference that same year (2014), he admitted that his forefathers were Hindus. I knew I would get authoritative answers from him instead of the usual rhetoric of common politicians. Unlike other politicians from the Congress party these days, he talked in a straightforward fashion without any intention to please anyone. He said, “Even though the initial idea of Khilafat Movement was to fight against British colonialism in India, what happened in Malabar riots was a catastrophe. Acts like attacking Hindus, invading and claiming their lands, robbing their properties, forced religious conversions were part of the riots. Such assaults against Hindus forced them to flee from their homelands. It is a fact that Hindus were harmed and tortured at that time and nobody should disagree with this fact!”

During our research, we found some other details of aggression executed by the Mappilas. The rioters were grouped according to their duties. While one group murdered, the other group robbed; some would set houses on fire after the attack. On 9 November 1921, in a place called Vallikunnu, the Mappilas burnt around a hundred houses of Hindus. The bodies of Hindu men and children were dumped in the river. A journalist at the time said an honest source told him that he saw a dead body of a six-month-pregnant Hindu woman. Her stomach was hacked in such a way that the dead fetus lied outside her body.

A P Namboodiri shared with this author the hardships his family faced during this period. It was a common practice of the Mappilas to ask for alms from Hindu households and the Hindus would donate grains and utensils to them. Yet, Namboodiri's grandfather got suspicious as the Mappilas started asking for tools for cutting and sawing. Anyway, he would donate whatever the Mappilas asked for.

One day, the Mappilas arrived and asked for guns. Their request wasn't granted and they had to leave empty handed. Soon, Namboodiri's grandfather heard the news of the riots and that the rioters were approaching their area for murder and robbery. He immediately told his family to leave. The rioters invaded their house soon after and searched everywhere but found no one. On their way back, they saw two of the inmates hiding nearby. The rioters caught hold of them and ordered them to give them the guns. When they refused, the rioters slashed them to death in the backyard of the house. The rioters searched every corner of the house, but they were unable to break open one room. They even used an iron ram to break open the doors of that room but failed. Namboodiri showed us the marks left behind by that impact on the door, which is still in place firmly in his old house.

C Sankaran Nair, who was the president of Indian National Congress, described the savagery of the Mappilas during the Malabar riots in one of his books. In that book, he writes about an incident where a woman was raped by the Mappila rioters in front of her husband and brother.

N C V Namboodiri recalls the experiences of his father. One day, some Muslims from Chengara came to his house and said, “We are going for a war against the British. We need some guns and other weapons. We need some money and grains as well. We will protect you, we are against the British.” Believing this claim, Namboodiri's grandfather handed out guns, grains and Rs 500 to the Mappilas. His grandfather told the rest of the family that they were safe and there was no need to flee as the Mappilas had promised him security. However, at night around 8pm, a group of Muslim agitators arrived at the house and called Namboodiri's grandfather. They said, “We are going for war, we need your auspicious token.” The man of the house replied, “I already gave the token to you.” The Mappilas refused to leave. “No, we are leaving at this moment. We just need your blessings.” When Namboodiri's grandfather told the manager of the house to give Rs 100 to the Mappilas, they said, “We need the money from your hand for auspiciousness.” The innocent Hindu man believed what the Mappila said and came close to them to donate the money. As soon as he appeared in front of them, he was shot with the same gun he had handed to the Mappilas earlier.

Hearing the gunshot and the ensuing chaos, the rest of the family members fled. Their house was robbed in their absence. When Namboodiri’s father returned to his house after the riots ended, he saw the degraded body of his father lying there on the ground, bitten and snatched away by the crows.

The Tuvvur well incident is something which needs as much attention as the Wagon Tragedy. The Muslim rioters confined captured Hindu men and lined them up near a well in a place called Tuvvur. Each one of them was asked whether they were ready to convert to Islam. Those who were not ready to abandon their dharma were decapitated and thrown into the well. Some would survive the initial slicing of the throat, but they had to go through the agony of pain till death inside the dry well. K Madhavan Nair, an Indian National Congress leader who visited the well after six months of the incident, said he saw more than 20 skulls in the well. Natives of the place claim that over 40 people were killed and dumped in the well. Even to this day, people avoid going near the well in the fear of being haunted by the ghosts.

Squeezing in all the details into a four-episode documentary on the Malabar riots proved to be very difficult for me. We managed to cover just the tip of the iceberg. But, we could definitely come to a conclusion on the matter after our research.

Let's run through the theories once again and identify the one that stands.

1. The Malabar riots as the Malabar rebellion, an Indian Independence movement against British colonialism.

How can that be when the rioters attacked and assaulted Hindu people who had no connection with the British administrators? Mass religious conversions formed the backdrop of the riots as well. Therefore, the Malabar riots can never be an independence movement.

2. The Malabar riots as an agricultural revolution aimed at dismantling the feudal landlords and establishing an egalitarian society.

If the Muslim rioters attacked and annexed only the properties of feudal landlords, we could have acknowledged this theory. But, thousands of poor Hindus who were labourers, tenants and craftsmen were brutally murdered, and all Muslim landlords were left alone without any harm. Thus, the theory of agricultural revolution breaks apart.

This leaves us with only one conclusion for the Malabar riots.

3. The Malabar riots as a genocide against Hindus.

The people who actually survived the ordeal will accept nothing other than this description of the incident.