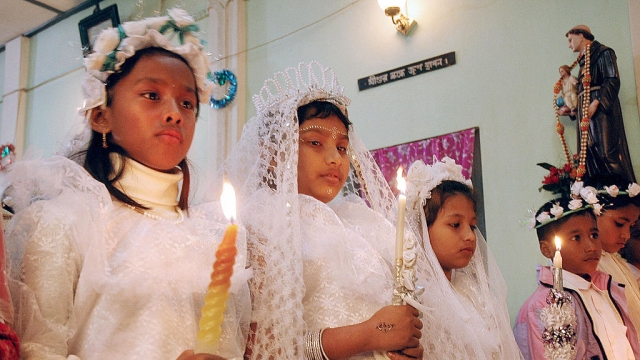 Tuting is about as far as one can go into Arunachal Pradesh without winding up in China. Twenty kilometres further, as the crow flies, is Chinese territory. To get there, you have to undertake a bone-jarring ride up from Pasighat in the Arunachal plains that, depending on your travellers luck, can take between two and three days. After Tuting, you reach the village of Geling, where the road ends. The ridge of the hill facing Geling is the Line of Actual Control, the working – and disputed – boundary between India and China.

It is not exactly the busiest place. Life pretty much ends at dusk in Tuting. After that, a great, silent darkness descends on the earth.

The silence was broken on one night I was there, by a crescendo of shouts of “praise the Lord, praise the Lord”, coming from the room next to mine. It turned out to be a group of evangelists, trying to attract converts from the local Buddhist faith.

Proselytisation is a fact of life in Arunachal Pradesh. It has been the site of a competition between evangelical Christian churches, Hindu groups affiliated with the Rashtriya Swayamsevak Sangh, Buddhist monasteries, and adherents of local faiths, for decades. The competition for harvesting souls has reached all the way to the border with China.

To paint this competition as a picture of grand conspiracies and civilisation conflict would be easy. It is, after all, the conventional wisdom.

The civilisational conflict worldview may lead one to think, in the case of northeast India, that Christian evangelists are somehow responsible for implanting the seeds of rebellion in simple tribal heads, as a recent article in Swarajya did. Such a thinker may even assert, like the writer of that article, Jaideep Mazumdar, that evangelists have followed a long tradition of creating a sense of alienation between newly baptised tribals and India, which then led to the birth of insurgencies.

The article went on to state that, “For Arunachal, the Christian missionaries have a more diabolic plan: to not only convert all the tribals into Christianity, but float a fraudulent theory that all of them belong to the same genetic stock as the Nagas and, hence, should join their Naga brothers in demanding that they live together as one people under a common administrative and political setup”.

The Naga identity, Mazumdar claimed, was an artificial one created by Baptist Missionaries.

I disagree with this line of thinking, for a number of reasons.

The idea that a certain identity is “artificial” assumes that certain other identities must be “natural”. It would be interesting to hear from Mazumdar, or anyone else who shares his views, how the vastly diverse Indian identity is a more “natural” one than the much smaller and more homogenous Naga identity.

Identities form with the passage of time, and this is true for the Naga and Indian identities, and for all others too. It may be that one identity is older than another, but time has not ended. What is now young will one day be old.

The genesis of insurgencies in Northeast India, which Mazumdar lays at the doors of Christian missionaries, is also more complex than a simple matter of religious difference. The impact of missionaries may or may not have contributed to insurgencies in Nagaland and Mizoram. I would like to hear Jaideep Mazumdar explain how Christianity was implicated in two of the most powerful insurgencies in the Northeast, in the Brahmaputra valley in Assam and the Imphal valley in Manipur, that involve populations which are not Christian.

A second area of tribal rebellions against India is the belt from Telangana to Jharkhand, where Maoism has taken hold. Would Mazumdar be able to explain, using his Christian conspiracy theory, why so many tribals in that vast area also rebelled against the Indian state?

It is one thing to blame the missionaries for converting the Nagas to Christianity. The fact is that two processes occurred more or less simultaneously in the Naga Hills from the 1870s. The spread of Christianity was one. The spread, for the first time, of an Indian administration into the Naga Hills was another. Without the empire building of the British, the Nagas may not have become Christians, but it is not certain that they would have become Indians either.

Suspicion of foreign missionaries is an old thing here. Historically, the first Protestant missionary to preach the gospel in Northeast India was not a foreigner but a Bengali from the Srirampur Mission near Kolkata, named Krishna Pal, who spent eight months in 1816 around Pandua where the Khasi Hills meet the plains of East Bengal, according to “A Brief History of Christianity in North East India” by Rev Dr Woba James.

The first contact between Baptist missionaries and an Arunachal tribe occurred before missionary contact with the Nagas of Nagaland. This was in 1839, when Mr and Mrs Miles Bronson and Mrs Jacob Thomas, who came to work among the Singphos in Jeypore in Assam came into contact with the villagers of Namsang in Tirap district of Arunachal Pradesh, writes Dr James. The first mission to the Naga Hills came much later, in 1872.

The effects of Christianity on the tribes have been mixed.

According to Rev. Dr James, Christianity “provided an ideology that helped the tribal people maintain their identity in the face of serious erosion of their traditional religious, social and political institutions”.

However, Dr James concedes that “Western Christianity regarded their culture as the only valid expression of Christian culture. They considered everything non-Christian as the product of depraved human beings under the influence of Satan”.

The erosion of tribal traditions, cultures and institutions has taken place in Northeast India in sizeable measure as a consequence of this belief.

Part of the reason Christianity made rapid progress in Northeast India is because it became linked with the idea of progress. The great anthropologist and lapsed missionary Verrier Elwin, in his book “A Philosophy for NEFA” published in 1957, had noted that conversion to Christianity was often accompanied by a feeling of superiority and a foreign outlook. “I was told in Tuensang by more than one Christian youth that ‘what we want is American dress, language and way of life’,” he had written.

“The Hindu, despite himself, considers whether the tribal regions cannot in some way be brought within the all-embracing tolerance of Hinduism; the Christian cannot help regarding them as rivals to his own universal faith; the agnostic looks on all religions, tribal as well as others, as bound to collapse before the spread of scientific knowledge,” wrote Elwin.

Elwin doubted that the NEFA tribals would accept Hinduism in any organised manner, despite obvious similarities between Hindu and traditional tribal beliefs, because “between them and that great religion stands the gentle figure of the cow”.

The Puritanical strain of Hinduism, with its many taboos, was never popular in the Northeast, home to legendary Shakta and Shaiva temples.

“Hindu missionaries who teach teetotalism and vegetarianism, as well as a number of other taboos hitherto unknown to the tribal mind, are as divisive of the village unity and as destructive of tribal culture and custom as the Christian missionaries”, Elwin concluded.

The thrust of his advice to the government of India was to keep missionaries of all hues and denominations out of Arunachal Pradesh, or NEFA, as it was then known.

That wise practise could have been continued if the Arunachal Pradesh Freedom of Religion Act, 1978, had been implemented in the years since. Unfortunately for Arunachal, the Act, which prohibits conversion from one religious faith to any other by use of force, inducement, or fraud, did not see rules for carrying out its provisions framed in the last 39 years.

Conversion as a matter of conscience is a spiritual act. Selling one’s soul in exchange for food, shelter, healthcare or education is not.

The trafficking in souls, which is what competition between proselytisers of different faiths is largely about, has no spiritual purpose. It is a battle between the sales and marketing teams of giant multinational organizations.

Identity politics is the political end of that competition.

The trouble with such identity politics is that the categories by which it brands peoples are often too broad to be meaningful. For instance, there is a vast internal diversity within Hinduism. The same is true for Christianity and every other great world religion.

Similarly, while there are evangelical, proselytising Christians who believe everyone except them is going to hell, there are also many who live good Christian lives without becoming zealots.

A lot of people in this country have studied in ‘convent’ schools over the years. I was one of them. In my 12 years in that Catholic school, I do not recall anyone ever trying to convert me.

About half the students in my class in school were Hindus. To the best of my knowledge, they all remained Hindus after 10 or 12 years of schooling.

Over the decades, lakhs of Hindu students have graduated from some school or college whose name starts with “Saint” without being induced or coerced to adopt Christianity. Perhaps Jaideep Mazumdar himself was one such student.