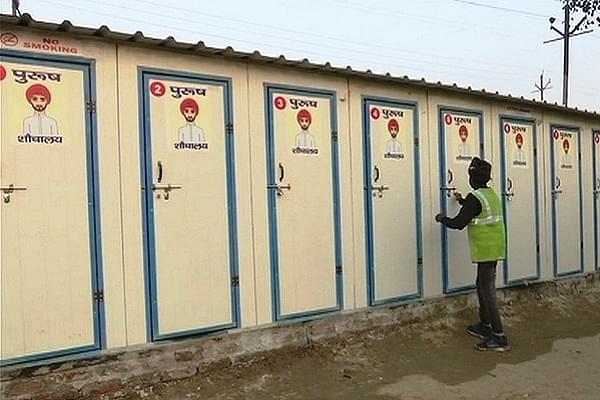 Today, there is a serious discussion going on at various levels - from international fora like the World Health Organization (WHO) to local newspapers - on whether India will become open-defecation free (ODF) by October 2019 - or more precisely 2 Oct 2019, which happens to be the 150th birth anniversary of Mahatma Gandhi.

In 2013, this question was unthinkable. Dreaming of an India free of open defecation was then like dreaming of India retaliating against terror, on the lines of Israel. But today, both have become possibilities. There are debates and discussions. But they are no more made of the stuff of daydreams - with Indian Air Force jets entering Pakistani territory, an ODF India is surely possible.

Cut back to the time when Modi was the Chief Minister of Gujarat. He was heavily criticised in 2013, when he was the prime ministerial candidate for the BJP, for announcing that toilets should get priority over temples.

As usual, the English media saw that as an ‘image makeover’. However, check this. In 2006, a critical observation was made about Gujarat:

Although Gujarat is one of the progressive states, it is sad that sanitation coverage is low.

This did not come from a Modi critic, but from Modi himself. He was addressing a state- level conference in Ahmedabad organised jointly by the state government and the United Nations International Children’s Emergency Fund (UNICEF) for the promotion of the Total Sanitation Campaign (TSC). Towards this end, Modi started taking the help of acclaimed spiritual personalities. Morari Bapu, one such personality, was asked by Modi to take the idea of sanitation to the people. Modi had explained his philosophy in the following words:

Sanitation is not a programme, but a way of life. We must make a sincere commitment to ourselves to ensure a clean environment in the villages and thus contribute to a healthy and prosperous society.

So, when Modi became the Prime Minister, the sanitation drive took centre-stage. On 2 October 2014, the Clean Indian Mission was launched. Since 2014, the Narendra Modi government has constructed 80 million toilets, and stopped 350 million people from open defecation. Yes, there are still 150 million people indulging in open defecation, but this achievement is colossal, to say the least.

A report quotes Val Curtis, director of the London School of Hygiene and Tropical Medicine’s Environmental Health Group, who has worked in the mission, as saying, “It’s the biggest, most successful behaviour-change campaign in the world. Every time I go there, I feel like I can’t sit down for weeks because I’m excited about what they’re doing. It’s incredible!”

Just in two years of the launch of the Swachh Bharat Abhiyan, the percentage of under-five children dying due to diarrhoea dropped from 13 per cent to 9 per cent. An interim UNICEF report on Swachh Bharat Mission assessing the economic impacts of the mission in rural areas revealed that on an average, households in Open Defecation Free (ODF) villages accrued cumulative benefits of Rs 50,000 per year and the households with a toilet saw a property value increase of Rs 19,000.

The lack of household toilets also forced Indian womenfolk towards open defecation where they have been victims of sexual predators. Barely months after Modi became Prime Minister, in Uttar Pradesh, then ruled by Akhilesh Yadav, two teenage girls who had gone into the fields because there was no toilet in their home, were found hanging from a nearby mango tree.

The Prime Minister himself referred to the incident in Parliament and expressed his anguish. By February 2019, in a function at Kurukshetra - the legendary battle place of the famous Mahabharata war - Narendra Modi was giving away the Swachh Shakti awards to a dozen women sarpanchs, who, as village head women, had excelled in motivating their villages to achieve 100 per cent sanitation.

It is plain and there for everyone to see. Pop-sociologists and masters of the academic hate-Hindutva cottage industry, including the pub-Gandhian variety who travel extraordinary light years inside the Hindutva mindset with the sole aim of proving it to be fascist and puritanical, Nazi-like and Brahminical, seldom even look at this glaring discrepancy.

But then, that is understandable. Their conditioning can never allow them to see the obvious. Modi will be lucky if they do not see a fascist, obsessive compulsive neurosis in a drive to keep the nation open-defecation free.

Then, what is the Hindutva angle in the toilet building campaign and sanitary coverage campaign?

Despite the relentless stereotyping of Hinduism as a religion obsessed with ritual purity, by colonial Indologists, Marxist academics, evangelical theologians and Islamist proselytizers, the Hindu-Vedantic traditions have shown a magnificent sense of inclusiveness that can do away with the sense of purity and pollution. Taittiriya Upanishad, when speaking of meditating upon the Divine in human functionality states:

Brahman exists as well-being in speech, as acquisition and preservation in the Prana and Apana, as activity in the hands and as movement in the feet, as evacuation in the anus - thus is the meditation of Brahman in reference to man.

This is perhaps the boldest statement of universal inclusiveness. In later Upanishads, it is further expanded:

The anus is adhyatma, the excreta is adhibhuta, and Mrtyu is adhidaivata. The nadis bind them. He who moves the anus, the excreta, Mrtyu, the nadis, prana, vijnana, ananda, the akas of the heart, and within all else – that is Atma. It is that which should be worshiped. It is without old age, death, fear, sorrow or end.

We do not exactly know from when on sanitary workers started being considered as ‘untouchables’ and defiled. But we do know that in the Tamizh Saiva tradition, removing the inner excreta (also called malam) is the work of the Guru, often identified with the Divine.

In fact, Saiva Siddhanta defines the term ‘Guru’ as ‘Gu’ meaning the ‘malam’ and ‘ru’ meaning one who removes it. In other words, just as the Guru does the inner scavenging, the hygienic workers keep our exterior environment free of impurities.

So, with the advent of the Hindu renaissance, the association of defilement and hygienic workers which had spread throughout India with the medieval institutionalisation of manual scavenging in urban centres, was questioned. Both the Advaita of Mahatma Gandhi and the modern Hindutva movements derive themselves from the Sri Ramakrishna-Vivekananda tradition of Vedantic Humanism. At its core is the powerful image of Ramakrishna cleaning the toilet of a Scheduled Community person with his own hand.

Walter Andersen is the sole exception in the academic study of the Sangh who points out that in the RSS camps, the cadre are made to alternate between cleaning the toilet and preparation of food.

Swami Chidbavananda (1898-1985) of Tamil Nadu who was one of the earliest spiritual seers to challenge in a respectful and loving manner, the notion of birth-based Varna concept initially held by Gandhi was also one of the most ardent supporters of the RSS movement in the state. In his Tapovan (residential school), he instructed his students to treat the kitchen, toilets and the worship-hall as equally sacred. Swami himself would get into the septic tank of the hostel and clean it.

Amritanandamayi, another one of the inspiring spiritual lights of Narendra Modi and held in high esteem by the Hindutva movement, also used to work along with the devotees, cleaning septic tanks and removing excreta. The entry in the spiritual practice diary of her disciples dated 13 October 1985 reads:

Mother is getting ready to empty and clean the septic tank attached to the guest house toilet. The tank is full. She has just returned from a day-long journey and bhajan and darshan. The moment she is back, she wants to take up the scavenger’s job. ... She says: “A mother does not mind cleaning up the excreta of her baby because she has the sense of ‘mineness’ towards the baby. But we should have the same prema towards every one. Then we would not feel any aversion or disgust.” ... A brahmachari was handling the buckets filled with the contents of the septic tank, taking care not to slosh or spill anything. As buckets began to be passed rapidly, his attention wavered and one bucket fell to the ground. The excreta splashed all over his body. Mother said to him: “Don’t worry son! We carry all this inside us, after all. It will wash off. The real dirt is the attitude that ‘I am the doer’ while doing anything - whether it is puja or cleaning the gutter. That is hard to wash away. You should learn to consider any work you do as an offering to God. ... A brahmachari should be fit to do any work....”

And there is also another South Indian connection. During the NDA-I in Kanyakumari district, Pon Radhakrishnan was the Member of Parliament from Nagercoil constituency. Then, BJP also had a strong presence in the local elected bodies of the district. ‘Seva Bharathi’, the Parivar organisation for service activities, was then vigorously involved in a total sanitary coverage campaign in the district. By 2004, two panchayat unions in Kanyakumari district were declared as ‘under total sanitation cover’. That was almost 15 years ago. The newspaper report says that ‘for the first time in India, two panchayat unions in Kanyakumari district comprising of 183 villages had been declared as having ‘total sanitary coverage.’

The Vajpayee government had in 2001 chosen Kanyakumari district for a pilot run of a total sanitary coverage project. Gagandeep Singh Bedi, IAS, was the then district collector, and he spoke of this sanitation drive in the district with 250 toilets in government schools and 38,800 toilets for individual households as the target. In a way, as a Kanyakumari district resident, this writer can rightfully feel proud that the Swachh Bharat had its initial pilot run in this district.

What, however, matters even more is the ideological continuity and the Hindutva values that have finally got their fullest expression in the clean India drive by PM Narendra Modi.