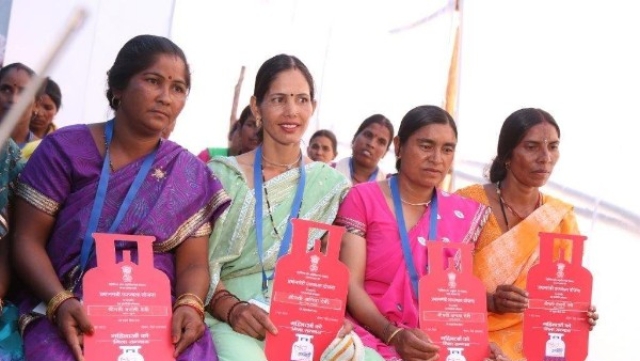 ‘Ujjwala’ in Hindi is “the bright one”. Among all schemes, Ujjwala is perhaps the ‘brightest’ gift given by the Narendra Modi government to the people of this country, as it has sought to illuminate the lives of millions of women.

It was also the scheme which had a high emotive appeal as its beneficiary is the homemaker, caregiver, and the nourisher. With an aim to replace unclean cooking fuels used in rural India with the clean and more efficient liquefied petroleum gas (LPG), Ujjwala intends to help reduce women’s chances of contracting respiratory diseases caused by exposure to hazardous fumes.

“As per a WHO report, smoke inhaled by women from unclean fuel is equivalent to burning 400 cigarettes in an hour. In addition, women and children have to go through the drudgery of collecting firewood,” says the official website of Ujjwala.

Given this fact, Ujjwala is a historic initiative for the empowerment of Indian women. She stands to gain at several levels from this scheme as the woman, herself, an ujjwala at her core, and the one who powers the household, was identified as the key beneficiary. Thus, perhaps, it was the scheme’s genuine intent that was responsible for the efficiency at which things got done. The government provided Rs 1,600 per connection and an equated monthly instalment (EMI) facility for meeting the cost of stove and refills, with Socio Economic Caste Census (SECC) Data helping to identify below poverty line (BPL) families.

In two years, over three crore families had already received the connection. In his Union budget speech 2017-18, Finance Minister Arun Jaitley said that the five million connections that were proposed initially had been increased to eight million in the wake of the popularity of the scheme.

Initially, there was a problem with cylinder refills because of two reasons: a) people were unwilling to pay the high price of the refill; and b) there was a long waiting period for the refill. So, many declared the scheme as all-hype, and had written it off. However, the Economic Survey 2017-18 clarified that “over 32 million gas connections have been provided and 79 per cent of these came back for a refill”.

More proof of how well the scheme was working on the ground – since some people see these numbers merely as Modi government’s claims – lies in the increase in India’s import bill, to which LPG is the major contributor. A Times of India report confirms this.

The report said that India’s import of LPG would top one million tonnes in 2017-18 on the back of household consumption expanding nearly 8 per cent in 2017-18. This is no surprise as Ujjwala adds volume to overall demand, thus making India the second largest importer of LPG in the world after China. In fact, the report further said, “Both International Energy Agency and OPEC see India as the main driver of growth in global oil demand for the coming decade as… ‘energy justice’ for the poor pushes up fuel consumption”. This does mean, though, that sooner than later, LPG pricing and subsidy are issues that will need to be looked into.

There are two aspects to the success of the Ujjwala scheme: one is providing access to LPG, and the second is effecting behavioural or preference change among people so that they make the shift away from solid fuels.

The access element: recent figures on the ‘state wise connections released’ on the official website show that by now Ujjwala is a good crackling fire spreading systematically through India’s hinterland (see table). Currently, 712 districts have been covered and 35,759,079 connections released.

The trends are noticeable. In the first round, the backward states – Uttar Pradesh, Bihar, Odisha, Chhattisgarh, Madhya Pradesh, Rajasthan, West Bengal, Uttarakhand, and Jammu and Kashmir – were aggressively targeted. Till recently (2017-18), the north-eastern states of Assam, Manipur, Meghalaya, Nagaland, Tripura, Arunachal Pradesh, Mizoram, Sikkim, and hill-state Himachal Pradesh were under the scheme.

Now, the next lot of states is being covered. Last week, the Union Minister for Petroleum and Natural Gas, Dharmendra Pradhan, inaugurated the scheme in Telangana. Another 300 gas distribution agencies were sanctioned to serve 20 lakh poor people.

The table shows that nearly 1.8 crore connections were added in each of the two years, and with two more years to go till 2020, there are chances that the scheme will come close to the ambitious target of eight crore connections. In any case, much ground has already been covered in an erstwhile-neglected area.

The government is also seeking to increase access through other initiatives like ‘Ujjwala Plus’ for deprived people not covered under SECC 2011.

An interesting behavioural aspect related to Ujjwala was brought out in a research paper, published in the International Journal of Engineering Technology Science and Research (IJETSR), in February this year. Authored by Dr Mamta Sharma Pareek, assistant professor at the management studies department at the Government College of Engineering and Technology in Rajasthan, the paper studied the Ujjwala scheme in the context of ‘nudging’ strategies that can change behaviour. According to the paper, “its prolific success in terms of getting new LPG connections to the poorest households in the country — from 87 lakh in 2014 to 483 lakh in 2017 — can only be attributed to quintessential Thaler-ian nudging”.

The paper goes on to explain how nudging methods have been employed along the length of the supply chain under the Ujjwala scheme to influence behaviour. The first nudge was based on the premise that if something is heard or seen a lot, then people start questioning it less, and the most obvious tool through which this is done is the mass media: the Ujjwala scheme held 50,000 safety camps in 545 days, and also advertisements, videos, and pamphlets, and ‘LPG panchayats’ were used to counter false perceptions. This included the misconception that cooking through biomass is better for digestion.

The second nudge was about proactively reaching the doorstep, easing procedures and giving an interest-free loan, which addressed the long procedures and cost considerations. The third nudge addressed the “fear of the unknown”: the solution was safety guideline posters with pictorial depictions to be mandatorily hung over the gas stove at eye level. A fourth nudge will be the planned exercise of the Ministry of Petroleum and Natural gas to conduct one lakh LPG panchayats over 400 days.

Nudges were also given to the supply side: district nodal officers (DNOs) were promised recognition and an award based on certain criteria, and the first such award function was held in Lucknow. Significantly, DNOs had video conferences with several functionaries as well as occasionally with the minister, Pradhan, and the author surmises that “such direct exchanges provided a huge morale boost to employees who would otherwise not have a chance to interact with their top bosses”. Social media promotion using photographs was made mandatory, with Pradhan being “tagged” and in turn encouraging the work done. “Not only did this cut through the red tape but it also devised a crucial feedback system for achieving the targets for new LPG connections.”

The Learning From Ujjwala

Author Sharma Pareek says: “The unfolding story of Ujjwala emphasises the salience of relatively small and contextual changes that re-wire choices and motivations, and not sacks of money, that ensure the success of a social project. Therein may lie some solutions to the overwhelming and seemingly intractable problem of global poverty.”

In fact, the Pradhan Mantri Ujjwala Yojana (PMUY) is, as given on the official website, “likely to result in an additional employment of around 1 lakh and provide business opportunity of at least Rs.10,000 crore over the next three years to the Indian Industry”. It was also expected to significantly boost the ‘Make in India’ programme, as manufacturers of cylinders, stoves, hose pipes, and regulators are all domestic.

Last but not the least, there’s more pleasant news – in the form of lowering of rural fuel and light Inflation. A report by S K Ghosh, group chief economic adviser, State Bank of India, came out with this finding in January this year. The impact of PMUY was analysed for 10 states and data showed that in states where more number of connections were distributed, like Uttar Pradesh, Rajasthan, Odisha, etc, the rural light and fuel consumer price index inflation had significantly declined or stayed flat, since the launch of the scheme in May 2016.

Suggestions for the way ahead

In the IJETSR paper, the challenges identified mostly relate to proper identification and targeting of beneficiaries and leakages in direct benefit transfer of subsidies. The paper also suggests that distribution channels for the supply of cylinders must be strengthened further.

Given the government’s determination, the efficiency of the data partner, and the success rate so far, there is no reason to believe that the dream number of eight crore connections in the next two years cannot be achieved.

How Technology Was Used To Make This Mammoth Scheme A Success

To us readers, “five crore new connections” may seem like just a number, but imagine the task that was involved here! The Ministry of Petroleum and Natural Gas engaged the services of Socialcops – a data intelligence company based in Delhi that works across 17 countries, partnering with 150 organisations, including on policy issues.

For Ujjwala, Socialcops focused on three areas: 1) opening new LPG distribution centres in places that have the maximum impact; 2) tracking the LPG application process; and 3) ensuring that new LPG connections were installed effectively and safely, as most were first-time users.

All this involved a detailed think-through, data collation and analysis, and then application to the problem at hand. First, the latitude and longitude of each of the 17,000 LPG centres were collected, and the distributors downloaded the app and submitted their geo-coordinates; then data regarding LPG penetrations, income, and population growth was sourced, and village, state, and district-level comparisons made. Then the 10 best locations for an LPG centre in each district were arrived at. Next came the problem of sifting through millions of applications. There were issues with issues: some applications were rejected within by distributors and then it was identified that those women did not have bank accounts. The Minister came up with the solution of setting up the Jan Dhan Yojana camps in those areas, and that worked to nearly eradicate this problem. Finally, each new installation was tracked for safety through analysis of photos taken during installation.