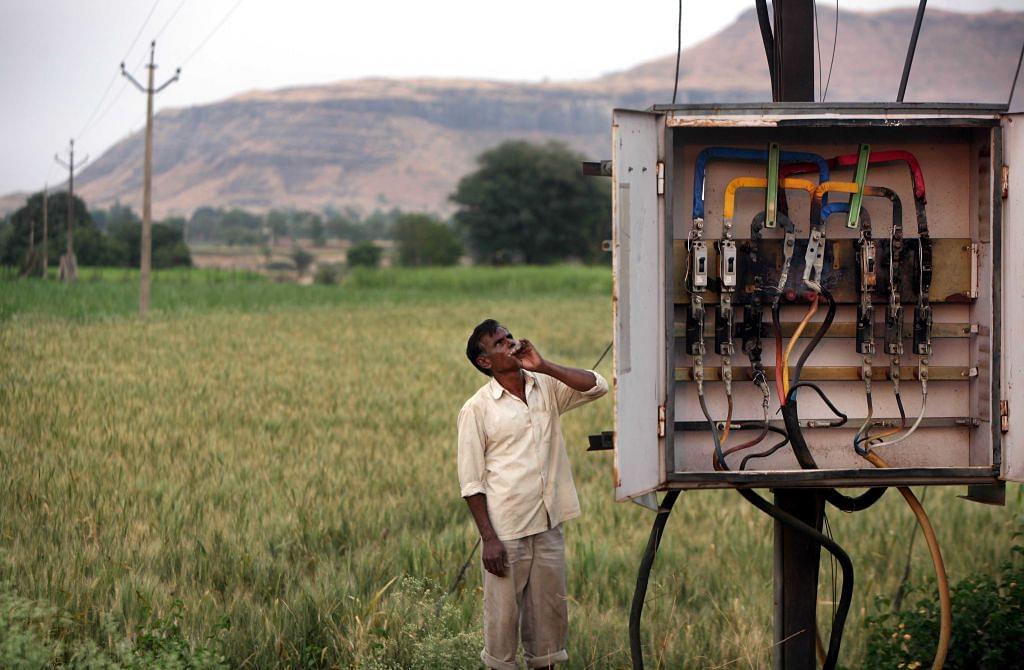 A farmer looks at a transformer next to his field in Chandapuri, Ahmednagar. (Vikas Khot/Hindustan Times via Getty Images)

A long established 'power struggle' between the private sector and the state sector has become irrelevant with the government announcing on 28 April that all villages in the country have access to power.

This has opened up a huge possibility for reprising the role of the backend service providers in several government departments. It applies not just to the power sector though it could be the trigger to set off the virtuous cycle. Instead of demanding that the services to run the infrastructure created by the government should continue to operate through government departments, it is now possible to offer them to any entity that can plausibly provide them at the lowest cost.

Let us examine the basis for this assertion, closely. The established wisdom in Indian public policy has run as follows: India is land of scarcity, where essential services are not available beyond the limits of large cities. Wherever they are available, the quality of the service is indifferent. This is true for the entire swathe of services that citizens of developed countries assume as given. The list includes primary education, healthcare and housing, going down to even mundane road connectivity, electricity supply, fuel and sanitation services and also to the less apparent but equally necessary services like internet and banking. Ergo, the services can only be provided by entities created and run by the state.

This can be confronted because of the developments in the recent years. The Indian governments, particularly under Narendra Modi, but even earlier, have begun to make huge investments to make a large range of services available across the country to all citizens. Given their transformative nature, beginning from the Jan Dhan Yojana to the latest announcement of providing electricity to all villages, those have created an opening to change the narrative of public policy.

Critics notwithstanding, it has been progressively acknowledged that the scale of services has begun to reach out to vastly more people than those who remain excluded. In fact as a new breed of officers, at least at the top echelons of the government, put their personal stamp on many of these projects, the chances of type I error that is exclusion by accident has got seriously minimised. For instance, in response to the complaints that the Union Power Ministry had gone overboard to claim that electricity has reached all villages, since that is not the same as reaching every household in every village, it has issued a statement saying that it will indeed do so by December 2018.

But the agency the departments have to often rely on are spasmodic in their performance levels. Flogged by the political executive they spring to life episodically but once the vigour has passed they slip back to their vapid conditions.

For instance, any company should jump at the chance to add to its consumer base by multiples as the government intends to do in the case of rural electrification. Instead the often bankrupt discoms are running scared at the prospect of adding more consumers. They have reasons of course. The consumers do not pay and the larger supply of electricity the discoms have to purchase to meet the additional demand, pushes them more into red.

Their squeamishness mirrors the same apprehensions of state-run insurance companies, state-run banks and oil companies as the governments have pushed them aggressively to mop up customers. It is at the base of the weakness of India Post to act as the first choice as micro finance institution, recent efforts notwithstanding. These agencies share the same reason for their flash in the pan performance. There is no linkage between performance and the reward\punishment environment for their employees. I am not saying anything new here.

In the present context, they create a new constellation of risk for the target driven approach the Modi government has taken on. So while these companies had added the names of consumers to their ledgers, they would drop those names as soon as they realise that the political executive is not paying attention to what is going on. Which means that the gains achieved to bring the low income Indians into the orbit of customers of various services could soon be dissipated. The implications are horrendous.

To forestall this calamity, it is necessary that the state cuts the link between its inclusion programmes and persists with the state-run companies or agencies to deliver them. It should rope in private agencies by the dozens. The constant criticism against the political executive in India has been that in a regime of scarcity it uses the meagre resources of the state to satisfy the demands of the rich. Despite clear evidence of graft and worse in those agencies like wastage (example: Air India) the party in power would persist with more of the same as it tried to provide the services to the poorer sections. The result was year after year of pusillanimous efforts that brought little political brownie points to the state.

Yet attempting to engage with the private sector was considered disastrous. Even in a city like Delhi, when the government led by Shiela Dikshit tried to experiment with water supply through private agencies she created her nemesis, Arvind Kejriwal. The counter argument was crisp. The government uses the state-run companies to service the rich while it throws the poor at the mercy of the private sector. It has proved impossible to argue against this logic by attempting to demonstrate the higher efficiency of the private sector to clean up the mess in the worst performing enclaves of poor supply (remember: Orissa power reforms).

The narrative could not be cracked, as long as the scope of the supply of the service was not made truly universal. But where it has, it should now be far easy to change the rules of engagement. When everyone is able to draw upon the services with carve aways for subsidy to the poorest, there is no play to create a political movement on the supposed marginalisation of any income group. Yet the risks can return if the state having created the infrastructure cannot keep it disciplined. And that can very well happen if the reliance on state-run service providers is not broken. It is just impossible to make the linesman of a state-run discom to respond to a call for electricity breakdown in a town. Would you imagine, he would travel out 10 kilometres from the city limits to do the same job, even once in a year?

It is here that creativity is needed. The state should concentrate on the business to build engineering solutions but farm out the job to maintain the service infrastructure to companies. The companies would be chosen through bids.

The private sector companies (no angels, certainly) will not get the space to complain that they have to invest massively to build up the infrastructure for supply of power, sanitation services, cooking gas or to build houses. That will still remain the remit of the state, at the federal or at the provinces.

It is so easy. The performance standards to keep the working assets in shape are easy to write as standard contracts. There are no devils of hidden capital costs to ferret out from the contracts, since there will be nothing to build. Even the least efficient state can write a contract specifying the standards at which the service of supply of cooking gas, or of ensuring education levels should be maintained by the franchisee.

In this context, the useful experiences are that of the telecom service providers. Faced with the prospect of having to set up cell towers, these companies have underperformed in connectivity targets in remote rural areas. Yet as the government has rolled out BharatNet – the optical fibre network at its cost to the same remote panchayats, the bids from private parties to maintain the same are expected to see aggressive quotes. Clearly a walk down this road would create a huge satisfaction level among those who are serviced.

There are also larger fiscal benefits. Since the fees can be shared in any easy ratio between the state and the franchisee, it is quite easy to create financial structures to take advantage of the periodic payouts. Here too, the state can encourage companies to float structures like infrastructure investment trusts. These are trusts but whose papers can be bought and sold in the bond markets. They are backed by the returns from the capital assets created, like the internet or power cables, or the houses leased out to the homeless, and so on. The possibilities in terms of employment generation, creation of a new order of companies and so on, are massive. They only need the political executive to stop equating mass supply of services to the Indian population with the continual felt need to ring fence the fortunes of state-run companies or agencies like discoms.