Vedas To Waferfiche: Preserving The Wisdom Of Ancient Manuscripts Using The Technology Of Tomorrow 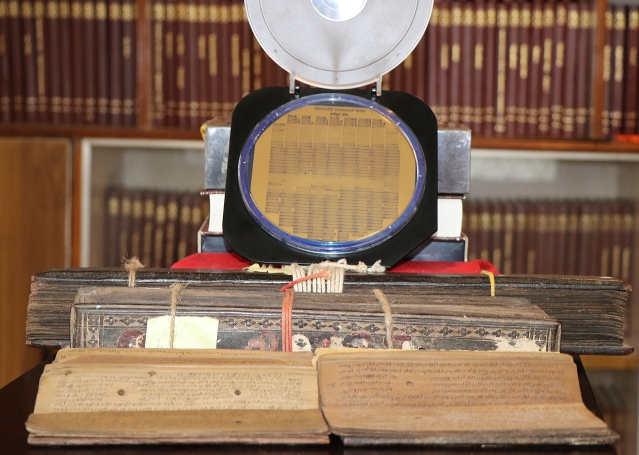 Manuscripts and the Waferfiche disk

Tucked away in a by-lane of Bengaluru where one still finds the old-world charm of gulmohar flower strewn streets, in the silent suburb of Jayanagar is a house-turned- library which has the wisdom of the Vedas stacked neatly, bound in dark maroon, and titles embossed in gold.

Thousands of manuscripts, some dated seven to eight centuries ago, have been digitised, and one of such texts, the 800-year-old Sarvamoola Grantha has been digitised using “Waferfiche” technology which means it will last at least another 10 centuries, come hell or ‘high water’. And, it has all been possible only because P R Mukund, a Bengaluru-born engineering professor in the United States decided to make sure our Indic wisdom is not lost to posterity.

Documents that would have otherwise decayed have been painstakingly digitised and now stacked at Tara Prakashana's Vedic Manuscript Library in Bengaluru. Preservation has been done in various formats. There are palm leaf manuscripts, books, multi-spectral images of manuscripts processed and printed on the world's finest archival paper. It is for the first time in India that this NGO has deployed Waferfiche technology to preserve the ancient Indian palm leaf manuscripts.

This technology, they claim, will preserve the text for at least 500 years, requires no care and is fire- and water-resistant. All one needs to do to access the text is to hold a magnifying glass. This is the same technology that has been used to record and keep the goodwill message from 73 countries that supported Apollo 11 safely in a disk on the moon.

Here are excerpts from an interview with P R Mukund, professor of electronic engineering at Rochester Institute of Technology, who shuttles between the Vedic Sciences and Electronic Engineering with as much ease as he does between the two continents.

1. When was your first encounter with manuscripts and how?

In 2003. Something happened around that time. It may sound like mumbo-jumbo but this did happen. This happened during a casual visit to the Sodhe Math in Udupi, which is one among the ashtamathas. I didn't know the Swamiji personally nor did he know me. I met him and after the ritualistic greetings I was about to leave when he suddenly called me and asked me my name and where I was from. He then called me, sat me down and for 40 minutes, spoke about the importance of saving the manuscripts. I was wondering why he was talking to me about this because this was not my area, I design little chips. He said you should do something about this. I had no clue what he was talking about. I took his blessings and left. As we were about to exit the building, he gave me some fruits and said “your efforts should bear fruit”. I had still no clue.

Two years later, in 2005, when I was talking to my Guru, Bannanje Govindacharya, we were talking about this Sarvamoola Grantha and he mentioned one Mr Charles who had microfilmed it. ‘Anyway, you are in the US, go find Charles from Smith University’ he said. I told him I had no knowledge of any such university. He said go find Mr Charles. Six months of detective work and we found out there was Dr Charles White, who is a professor of religious studies at American University. The “smith” word was because it was funded by Smithsonian institution. We tracked him down and he was very happy when we went to DC. In his late 80s, he had microfilmed manuscripts, but it was all mumbo jumbo - and when I asked my Guru, he asked me what’s the point of all the advancement in technology if we can’t save that which means something to us. That’s when I came down and we started work on this project. We then succeeded; using multi-spectral imaging, we were able to extract the images - after I did that, I started looking into what’s happening. Manuscripts are lying around all mathas but no one is really bothering about them. That’s when I started this trust and started the work. As of today, we have preserved over 3,000 manuscripts - it is an ongoing project.

It is called Multi-spectral technology. Preservation has three parts. One is image capture, the next is image processing and the third is the medium in which it is saved. Any digital technology changes every two to three years. So, if you really want to preserve - you have to do technology migration - which is rarely done. Which is also why no true archivist will accept any digital format as an archive. It has to be an artefact that doesn’t depend on any technology. So, for the image capture part, what we used is MST. If you look at a manuscript on a palm leaf, it is at different levels. So, it will image at those different levels, you image at different frequencies.

For preservation (we have the electronic format but we don’t think it is good for a long time), we are doing two things. First, we put together these captured images, print them and put together a book form, which may last say a 100-150 years. These are acid-free papers made of 100 per cent cotton. But then we wanted to save it for 500 years.

We come from a semiconductor background, so we came up with this technology which we have a patent for - ‘Waferfiche’ - you take silicon wafer - put a layer of metal on that - for Sarvamoola Grantha we put gold- now for others we use aluminium - we etch into that - so that all you need to do to read is magnification and illumination.

At the library here in Bengaluru is where we are now storing all the documents. We are going to put up a centre, and am currently yet to finalise a place. But one of the options is one at pachaka near Udupi, which is the birthplace of Madhwacharya. The Swamiji of Sodhe Math has offered us some land there.

The centre will have a small temple, a library - a physical and an electronic one, and a state of the art imaging centre with the multi-spectral imaging setup.

4. Manuscripts may hold a whole world of knowledge. But they are inaccessible. Many a religious organisation and matha holds them but are just stored away until lost to time. What purpose do they serve?

If they were only made inaccessible it was still fine, but sadly they do not even care. I wouldn’t want to comment, but what has happened to the mathas is that they are now corporations and the Swamijis are like the CEOs, so there is no point in dwelling upon them. A BBC reporter asked me the same question a few years ago...my Adiguru is Madhwacharya, his original works are called the Sarvamoola Grantha. We worked on that. There is only one 800-year-old copy, which is brittle and falling apart. So, I put together a team of experts, mostly Americans, raised the money, came here and saved it. After we did that, that particular Swamiji was greatly impressed and asked us to make three copies. This is the project that caught the attention of the worldwide press.

Every major news outlet wrote about it. BBC asked me ‘ Work of an 800-year-old Philosopher - of what use is it to society. I said none. It doesn’t do anything by itself, but it is the job of the scholars to extract things from there, give it to people in palatable form. The job of scholars is to take the knowledge contained in the manuscript to the people. So, it is not access to the manuscript per say, but the knowledge that is important. So you need people who will do that for you. In any society, people go to the knowledgeable one.

And that is the other task that Mukund takes up. When he is not teaching electronic engineering in the US or saving manuscripts, he is taking ‘the Vedas and the wisdom they hold to common people’. Be it conducting homas and instructing those interested on how to perform them on their own, to encouraging farmers to use this ancient Indic wisdom to agriculture, to advising and mentoring corporates to use Vedic wisdom at the workplace, Mukund dons many a hat.

While Tara Prakashana handles the manuscript work, Mukund has founded the Foundation for the Preservation of Knowledge in New York, that focuses on ‘Preservation and Dissemination of Vedic Knowledge’.

He also managed to get a copy of the oldest manuscript of the Bhagwad Gita, which rests with the British at the Bodleian Library, Oxford University, and transcreated it on a silicon wafer. He then gave it to the Indira Gandhi National Center for Arts, Delhi.

His shishyas aid him in his work often voluntarily. He also conducts workshops where he ‘maps the Vedic wisdom to modern day science and engineering concepts’. The foundation encourages individuals who may have manuscripts that they know will not last long, to have them archived almost forever using this technology that is now available in Bengaluru.