What Tanishq Didn't Get: It's 2020 And Hindus In India Shouldn't Need To Be Grateful That They Are Allowed To Do Hindu Things 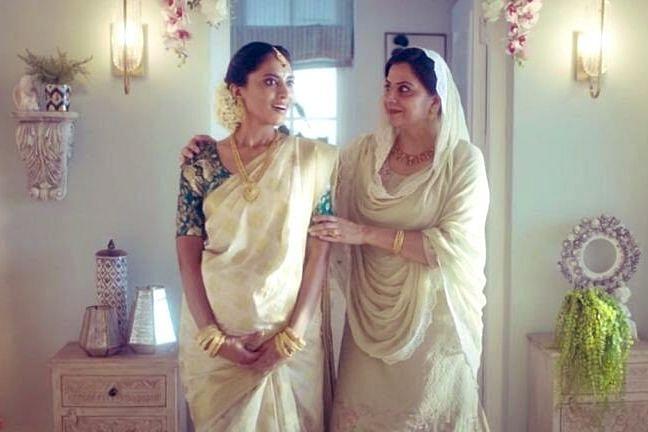 The Titan Company – a subsidiary of the Tata group – was in the news for all the wrong reasons this week, after Tanishq, its jewellery division, released a syrupy pseudo-secular advertisement which got the public’s goat. Share prices took a hit, dropping nearly 3 per cent, and brand Tanishq was skewered so badly on social media, that the company was forced to withdraw the ad and issue an apology.

That, unfortunately, only made things worse, because now, people objected to the tepid, defensive tone of the apology; as a wag put it, this was an apology of an apology.

Then, on cue, came the news that a Tanishq store in Gandhidham, Kutch, had been attacked. Naturally, no one specifically blamed evil, Hindutva types for this heinous crime, but two and two got you four every time.

That fakery went away only after Mayur Patil, SP of Kutch (East), held a press conference in the store to demonstrate that no such attack had taken place. All in all, it was awfully poor timing for Tanishq, coming as the ad controversy did, barely a month before Dhanteras – an auspicious day preceding Diwali, when Indians traditionally purchase jewellery in record volumes.

So must we ask: what’s the fuss about? Why did so many people react so strongly to the Tanishq ad? How did the Tanishq honchos get it so wrong? And, most importantly, what might the Tata group do to prevent future such blunders?

The ad itself is lavishly crafted, and shows a Muslim mother-in-law affectionately leading her heavily-pregnant Hindu daughter-in-law through their opulent mansion, to a surprise godh bharai ceremony (a Hindu baby shower rite) on their well-manicured lawn.

Taken pleasantly aback, the girl softly asks her mother-in-law about the need for this ceremony, when Hindu rituals do not take place in that household. The genteel mother-in-law fondly replies that keeping a daughter happy is a kind of ritual too.

Wealth and privilege pervade every scene, and the ad ends with shots of the pregnant girl being adorned with stylish gold ornaments, from Tanishq’s latest, high-end collection. A closing voiceover and tagline says it all: ‘Ekatvam by Tanishq – The beauty of oneness’.

On the face of it, Indians should have collectively chirruped at this luxurious example of Hindu-Muslim unity, and, charged by renewed secular zeal, enthusiastically rushed in droves to buy out their nearest Tanishq store. Titan share prices should have shot up by 15 per cent. Instead, the opposite happened.

One set of analysts put this unexpectedly-negative response down to the usual set of reasons: Islamophobia, Hindu bigotry, majoritarianism, fascism, intolerance, or what have you.

Others accused the ad of whitewashing ‘love-jihad’, legitimizing it, or even, of indirectly promoting it.

A third set seethed at the care taken to not offend Muslims, which they interpreted as bias – there were no idols shown anywhere (a major lacuna, since, as everyone knows, a standard Hindu rite can’t commence without a firm okay from the elephant-headed one, usually after he’s been supplied with a modaka or two).

All fair points, perhaps, and reflective of individual inclinations or emotions, but the deeper reason why so many people responded so instinctively, so indignantly, and so similarly, to the advertisement, actually lies in the brief exchange between the Muslim mother-in-law and the Hindu daughter-in-law.

Whether they realise this key point or not, subconsciously, what was most galling to offended viewers, was the manner in which the imperious mother-in-law patronisingly deigned to break from her rigid Islamic norms, for once, to condescend to the girl’s Hindu traditions which were otherwise banned in that home.

Even more galling was the girl’s gratitude, at being allowed to become Hindu again for a brief while; a point which the ad-makers reinforced repeatedly, through shots of her appreciative glances towards the older woman.

So, what was intended as a preachy social message of communal harmony ended up as a grating example of submissive Hindu thanks, for overbearing Muslim generosity, and left incensed viewers pitying the caged fate of the pregnant girl. The price of her love for a Muslim boy, by the ad’s script, was the abandonment of her religion, and her customs.

Makes you wonder what the advertising agency which made this ad was thinking. Did they honestly think that people would clap at the plight of a young woman denied her way of life post-marriage? Were they plugging jewellery or ideology? Did they spare a thought for legendary British adman David Ogilvy, who coined the stellar marketing phrase, ‘The consumer isn’t a moron. She’s your wife’?

But in reality, it is not the ad agency which is to blame; the final responsibility lies with the Tanishq management, since it is they who approved the advertisement. And it is Tanishq, which will have to bear the cross of having tried to pass off ‘noblesse oblige’ as sanctimonious secularism. This is the crux of the issue.

(‘Noblesse oblige’ is a French term which translates directly as ‘nobility obliges’. Its dictionary definition is: ‘a notion of aristocratic responsibilities’; the idea that people born into the nobility or upper social classes must behave in an honourable and generous way toward those less privileged. This is what the Muslim mother-in-law in the ad did, and this is what rankled most.)

Now, in a normal, pluralistic household, be it inter-faith, inter-caste or inter-race, the mother-in-law shouldn’t have to act out of the ordinary; she shouldn’t need to graciously accommodate her daughter-in-law’s way of life. And she surely wouldn’t need to be lauded for that. In fact, who is the mother-in-law to say which religious beliefs or rituals a daughter-in-law may follow or not, particularly in an allegedly-harmonious, ‘secular’ home?

Shouldn’t the daughter-in-law be automatically free to practice her beliefs and rituals in such an atmosphere? Why should one need to take permission from one’s in-laws, to practice one’s faith? How insulting and humiliating are such restrictions? It is these egregious contradictions which made the Tanishq ad come apart at the seams.

By the ad, thus, it was as if this was ‘Be nice to Hindus week’, and that made the mother-in-law’s noblesse oblige unpalatably condescending to those many who erupted online.

Lost in their bubble of wooly-headed idealism, the ad-makers probably failed to realise that no one needs to be nice to anyone because of their faith, or caste, or race. Those days of selective decency are long gone. On the contrary, an image of a Muslim mother-in-law, grandly conceding the conduction of a Hindu ritual in her household, for once, and just for once, only rekindled painful racial memories of what life for the kafir was like under a Sultan’s yoke.

No wonder so many of the online apoplectic retorts referred to Tipu and the Mughal Raj.

Bottom line: No one likes to be pitied.

The point, then, is that being nice to someone merely out of generosity to their faith is actually insulting. Such arrogance has no place in a humane society, where people are anyway meant to be civil to one another regardless of identity.

Yet, evidently, that is not so in the creative departments of some advertising agencies. Nonetheless, the reality that exists outside such offices today, instead, is a momentous nationwide effort to rid our land of exactly these stigmas, cultural separatism, and prejudices.

A lot of that boils down to undoing the ills of partition, like eradicating identity politics, vote-banking, or a lingering hankering for the two-nation theory; and the sooner marketing executives understand that, the better. This Hindu-Muslim divide is real; it is an unfortunate legacy issue that should never have arisen in the first place, and it will be bridged only when ‘Amar Akbar Anthony’-style secularism becomes inconsequential.

But apparently, little of that seems to have gone into the ad brief. As a result, a famous Tata brand abruptly lost a great deal of arduously-built up street cred, simply because someone tried to blend their personal politics with commerce.

Consequently, one option is for a senior functionary at the Tata group level to have a long chat with the Tanishq team, while others recast marketing policies more suited for an actual India that is, rather than for an imaginary India of vacuous, liberal dreams. If you’re as big as Tata, you need to be that much more aware of the pulse of your market.

The reason is that India is now enlightened enough to differentiate between Ratan Tata – whom most view as a bonafide Indian hero, the Tata group – which remains the pride of India, and a few senior executives of Tata’s Tanishq division, who were unfortunately deracinated enough to commission and approve a poorly-conceived advertisement.

Also, we mustn’t forget that the bulk of Tanishq outlets are franchises, and that the hefty investments of these innocent franchise owners cannot be held ransom to an ideology they might not even support.

So, in conclusion, there’s no point trying to hide behind the advertisement. It is exactly what true pluralism isn’t; indeed, it resonated adversely with a significant section of the target audience precisely because of that – because it was pure aspic, and aspic isn’t aspirational. That is how a great product was ironically scuttled upon its launch, by its own makers.

Therefore, the management of Tanishq can either stuff such needless noblesse oblige in their pipes and smoke it, or wake up, step out of their time warp, get in touch with a majestic awakening taking place in India, and remember that profit trumps politics every time. Secularism doesn’t sell in India anymore; only pluralism does.